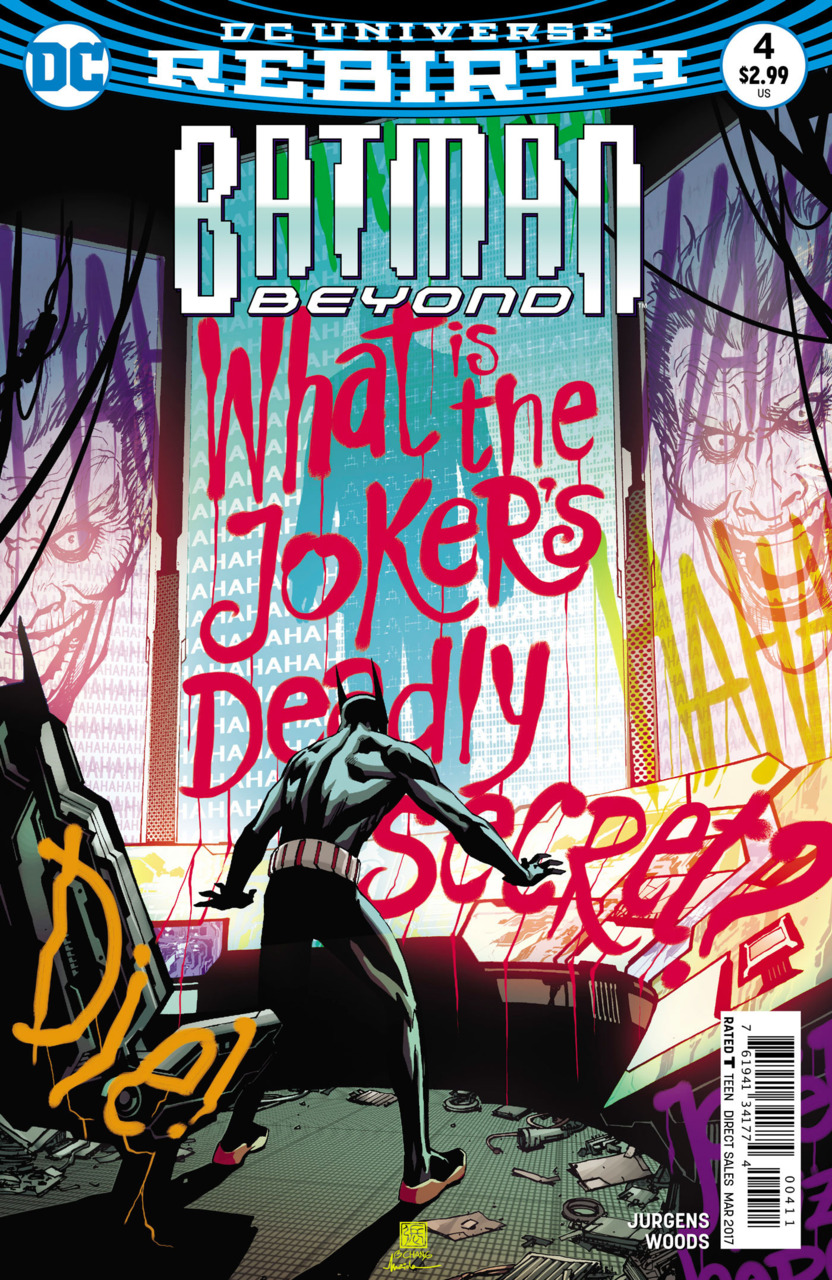 “Escaping the Grave: Death and Life” opens where the previous issue ended. Terry and Dana are tied up and hanging upside down while the Jokerz are launching acid balls at them. While in this position, Terry thinks he sees his brother, Matt. He struggles to come up with an idea but without the suit and Bruce he is coming up empty. Terry remembers that he has a batarang in his belt and he struggles to get it while Matt runs into the building to head to the roof. Dana is hit in the leg by the acid and screams in pain as Terry gets his hands on the blade and cuts his hands free. Terry grabs Dana and climbs up the building as the Jokerz increase their bombardment. Matt runs past Terminal and what he thinks is the Joker’s body but he has no time to stop and ask questions. Matt reaches the roof to find two Jokerz there, one sees him while the other takes aim of Terry and Dana. Terry throws his blade and hits the Jokerz in the shoulder while the second one struggles to get Matt’s backpack. He succeeds only to be decked by Terry McGinnis. Matt tells Terry that he and Max knew that Terry needed help and they found an experimental thing in the cave. Dana starts to put the pieces together when Terry pulls out the new Batsuit.

The Jokerz head into the building to get to the roof as Terry puts on the suit in front of a surprised and hurt Dana. He has been lying to her for years and Terry apologizes as he puts on the mask and takes to the sky just as the Jokerz burst onto the roof and see that Batman has arrived. They attack Matt and Dana only to be covered by Batman who then turns his attention onto the Jokerz. He reaches into his belt for stun grenades and finds that they are miniaturized and uses them to stun the attacking Jokerz. Batman finds that he has a radar sense and can see a couple of Jokerz climbing the building and is able to dispatch them with a couple of batarangs. One of the hulking Jokerz grabs Dana and Batman launches a couple of batarangs into his arm and easily punches the Jokerz out.

Inside the building, Terminal is interrupted by a Jokerz informing him that Batman has arrived. He orders the goon to get the flier.

On the roof, after the fight, Dana realizes that Terry is Batman and he has been lying to her for years. She is not happy about this realization and Matt steps in to remind the two that Terminal is still downstairs. Batman moves to stop him from reviving the Joker. Matt tells Terry that he heard Terminal talking about Bruce Wayne.

Terminal has escaped the building in his flier with Bruce’s body. He takes a retinal scan to open the hanger of the Wayne tower and the flier lands making the pilot wonder if they really have the Joker’s body.

Batman, Dana and Matt discover that the Joker and Terminal are gone. He starts to search for clues when he discovers that Terminal had files of Bruce Wayne’s DNA, fingerprints and retinal scans revealing that Bruce Wayne is alive. Next issue Moment of Truth.

The story moves forward in this issue. Dana discovers that Terry is Batman and she is not too happy about that. I like that she shuts Terry off when he starts to say that he lied for her own safety. She even says that he lied for his own good. It is slowly being revealed that the Joker here really is Bruce Wayne, but not entirely just yet.

As far as my impression of the new suit goes, it does maintain a lot of the look of the old Batman Beyond suit. I am not overly crazy about the red spidery eyes in the mask but I do like the tech in it except for the idea that Terry now has a bat sense that mirrors Spider-Man’s spider sense. I do not find that too original, but the weaponry of the suit is cool. Overall there are good qualities and bad qualities here so I will reserve my final verdict until later issues.

The issue had good action and moved the story forward as well as opened the door for some character development of Terry and Dana’s relationship.