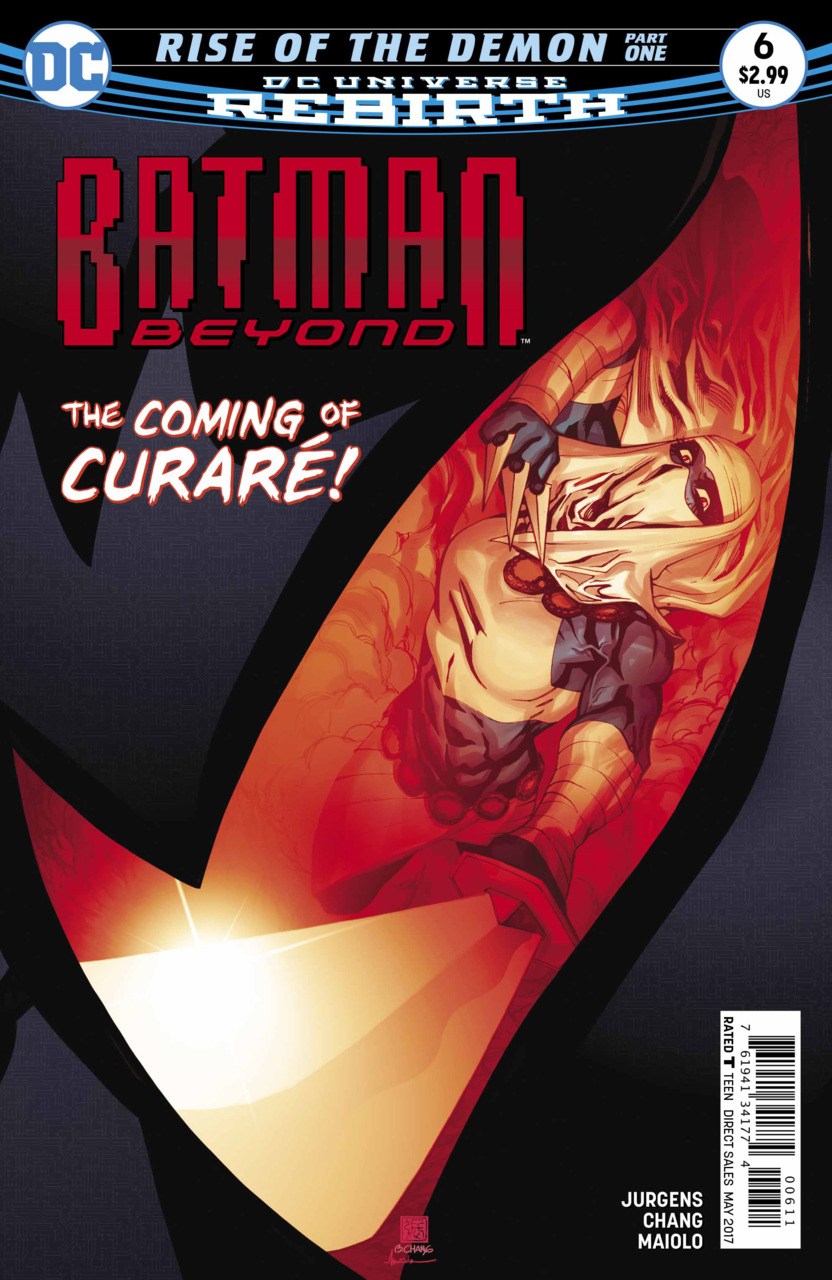 It’s good to know that in the future there are some things you can always count on.  First came the Batman and the Jokers, now the League of Assassins is making its debut in the pages of the second arc of Batman Beyond, “Rise of the Demon.”  The word “Demon” is loaded when you’re referring to the Batman mythos.  It calls to mind one of the Detective’s greatest foes, Ra’s al Ghul, the seemingly immortal leader of the League of Assassins.  While the Demon’s Head himself doesn’t make an appearance, his legacy is on full display.

The issue opens with mid-chase as the League is tracking down Curare, a holdover character from Batman Beyond’s animated days.  Her training is obvious as she handily deals with her attackers before making her getaway.  The scene is quick and to the point, setting up the character as one of mystery and someone to certainly be feared.  Back in the Batcave the family reunion of sorts is in full swing, with Bruce Wayne adjusting to having his life back as well as seeing how differently his approach to being Batman was against Terry’s.  The dichotomy is interesting, and is just one of the many successes that come with Dan Jurgens’ work on this character.  He has played the past and the future against each other in a surprisingly engaging manner.  I’ll be honest in saying this book has never been on my radar, but bringing the character into continuity under the watch of Jurgens was a brilliant move on DC’s part.

While the new Bat-Family is enjoying the downtime after dealing with Terminal and the Jokerz, Barbara Gordon is also dealing with the fallout from the previous arc.  The murder of Terminal has left a number of questions as to how events played out and she is looking to put the pieces together.  While doing that, she encounters Curare, who is in need of help.  Of the Batman variety.  The pair head to the rooftop to send up the batsignal, only to be ambushed by more League of Assassins members.  A harrowing fight ensues, and they are able to shine the beacon before being surrounded.  What I’m assuming is the actual setup to the story arc was fairly minimal in this issue, but effective nonetheless.  The threat has been presented, but we still don’t know the stakes, so there’s plenty left to reveal.

While the throw down at Gotham PD is raging on, the Bat-Family is splitting up for some requisite character development.  Bruce Wayne confides in Terry’s brother Matt his belief that the real Joker is in fact alive and back in the picture to some degree.  He also confides his belief that Terry would be just fine without him in the picture, some projection on his part based on how he saw himself in his younger days.  While they talk, the subject of the prototype suit comes up with Wayne expressing concern as to the safety of that specific model.  Meanwhile, Terry and Dana are reconnecting.  Understandably there is a lot for the two of them to unpack now that Terry’s revealed to her his history as Batman.  The revelations have shined new light on their time together and she is obviously hurt.  The parallels between this side of Terry and the young Bruce Wayne are strong.  Both making decisions for other people.  The differences, however, are soon made clear as Terry devotes himself to having the best of both worlds, and promptly ignores the Batsignal’s presence in the sky.

The first arc of this book was well written and entertaining, but it had a definite problem in the art department, with strange angular faces and an almost unfinished approach to some panels.  This issue is a marked improvement for the team.  Here Bernard Chang is firing on all cylinders and showing us a sleek, not overly stylistic approach that he was just missing in previous issues.  The team has seemed to gel and this book is much better for it.  They’ve given us a solid story that simultaneously respects the past while building a new future.  I’m looking forward to seeing what’s to come.