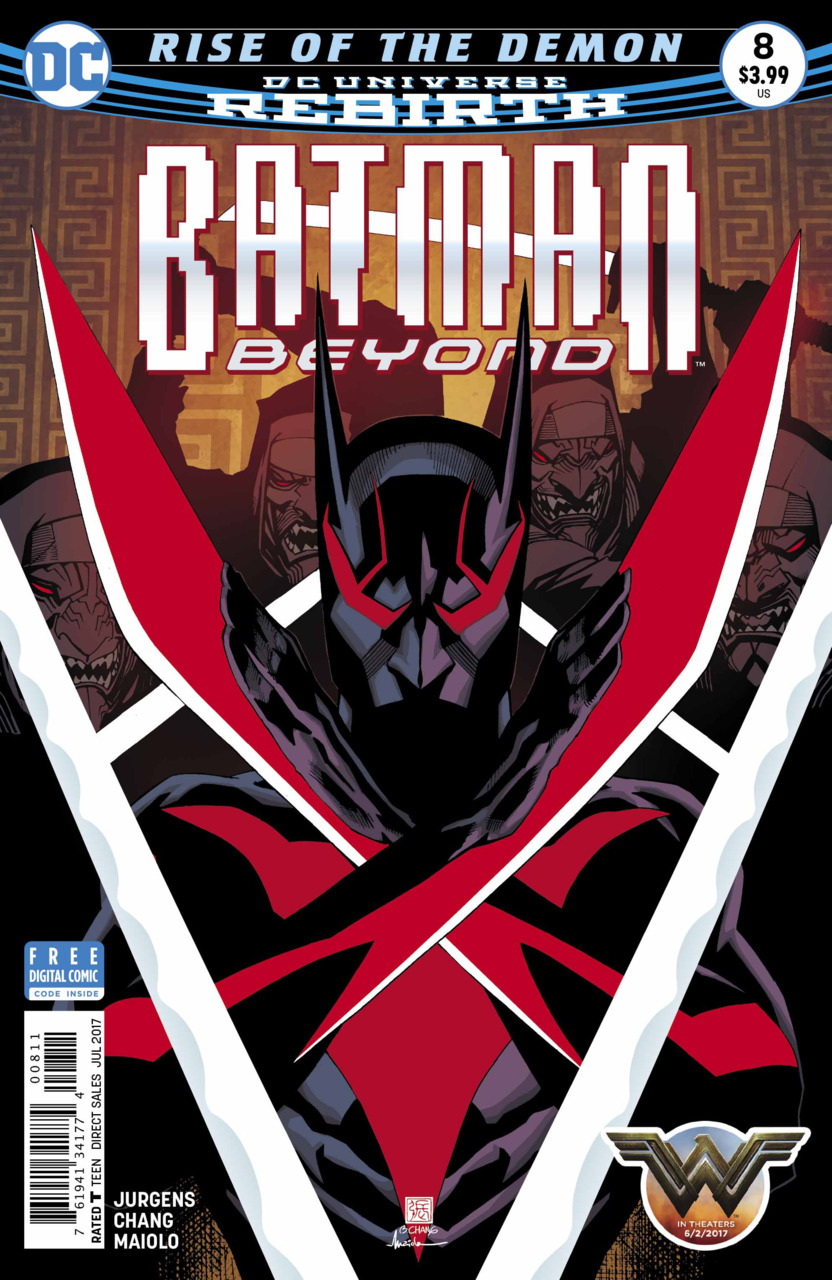 (Spoilers ahead) Decades from now in the Batcave, Bruce Wayne, Max, and Matt McGinnis plead with Terry to return with the experimental suit he is wearing. Terry on the roof of Gotham Police Headquarters insists that he cannot because Ra’s Al Ghul is alive. Curare calls her ship to pick them up while Bruce continues to plead with Terry to dump the suit. Terry insists that he feels fine but the conversation is interrupted by Koru, the “Demon’s” right hand. He attacks and Batman engages him. Curare on her flier calls down saying that Batman needs to forget about Koru. Instead Koru taunts Terry telling him that he is only a pretender and he has not earned the name of Batman. Batman gets one more blow and lifts up to join Cure leaving Barbara behind. Koru makes a move to stop their escape and Curare jumps down to block him. The flier has an auto pilot and it is programmed to take Batman to the Demon’s enclave. The flier leaves leaving Curare to die at the hand of Koru and the communications with the Batcave have been scrambled. The suits artificial intelligence program tells Terry that that it will ensure Batman’s success.

Barbara reaches Curare just as Koru leaves saying that he does not have any time to deal with Barbara now but the events are unfolding as the Demon desires. Koru contacts his master telling him that the pretender is on the way.

In the cave, Matt asks Bruce if Terry is in trouble. Bruce says that the AI will overwhelm him because the AI is programmed not to allow Batman to fail. Bruce recounts his time towards the end of his career as Batman. People were dying and the police were beaten. Bruce was too old and he was up against the Banes. Bruce retreated and started working on the prototype suit and AI. Bruce was able to beat the Banes but he realized that he was acting aggressively, even deadly. It did not matter what injuries he sustained, the suit kept Batman functioning. Bruce learned that the suit was controlling Batman’s actions, not the wearer. The AI was starting to take control of Bruce himself. At the end of the fight, Bruce was able to remove the suit but only because it was damaged in the battle. It was the last time Bruce ventured out as Batman. Max tells Bruce that he should have destroyed the suit and he admits that he should have but he kept tinkering in hopes of making it better. Max says that no one should use it again and Bruce cryptically says that someone did once but would not elaborate. His concern is that Terry will face the Demon and neither will survive.

Bruce stands up to go after him and Max insists that he stay. Bruce relents and asks for coffee. Max and Matt leave Bruce alone.

Batman approaches the enclave and the suit raises an alarm for a surface-to-air missile. The flier is destroyed and Batman bales out and lands in the snow to face a squad from the League of Assassins.

In the kitchen, Matt and Max hear what Matt thinks is the Batmobile. Bruce has taken off after Terry.

The battle at the enclave is short as the entrance is riddled with the dead and wounded. The suit AI detects movement and we hear a voice welcoming the pretender. The Demon and Batman engage in combat and we see Bruce in thought saying that Terry has no idea how dangerous this confrontation is. Batman launches batarangs at the Demon who blocks them with ease. All throughout the battle we read Bruce’s thoughts saying that the Demon is too well trained in numerous techniques, fast and incredibly smart. We see the helmet of the Demon removed as we get a panel of Batman saying “no way” as Bruce says younger. The next page gives the reveal. Ra’s is gone but the Demon is now Damian Wayne and we see Damian facing off with Batman. Next issue Blood Feud.

This issue gives more of the back story of the suit Terry is wearing. We see how and why Bruce created the suit, to fight the Banes gang. That does make me wonder if there are any more gangs based on Batman’s old foes out there in Neo-Gotham. We already know about the Jokerz and now we see the Banes. Nevertheless this issue gives a good and detailed back story with just a hint of something being held back. I am wondering if the person who tried the suit after Bruce was Damian and that may be the reason he is the Demon now. Hopefully we will get more answers next issue.

The end of issue reveal of Damian Wayne was surprising. I did not suspect it when I first read the issue and the end was a complete surprise to me, so well done in writing.

The art here is also good. I particularly like the shots of Barbara. She is still showing the cuts and wounds she received in her battle in the previous issue. The only complaint is I did not notice any wounds on Curare. She took two stars into her shoulder blades and I did not see any blood from her wounds until Koru kills her. We do get a nice detailed shot of his sword dripping with Curare blood that I thought was well done.