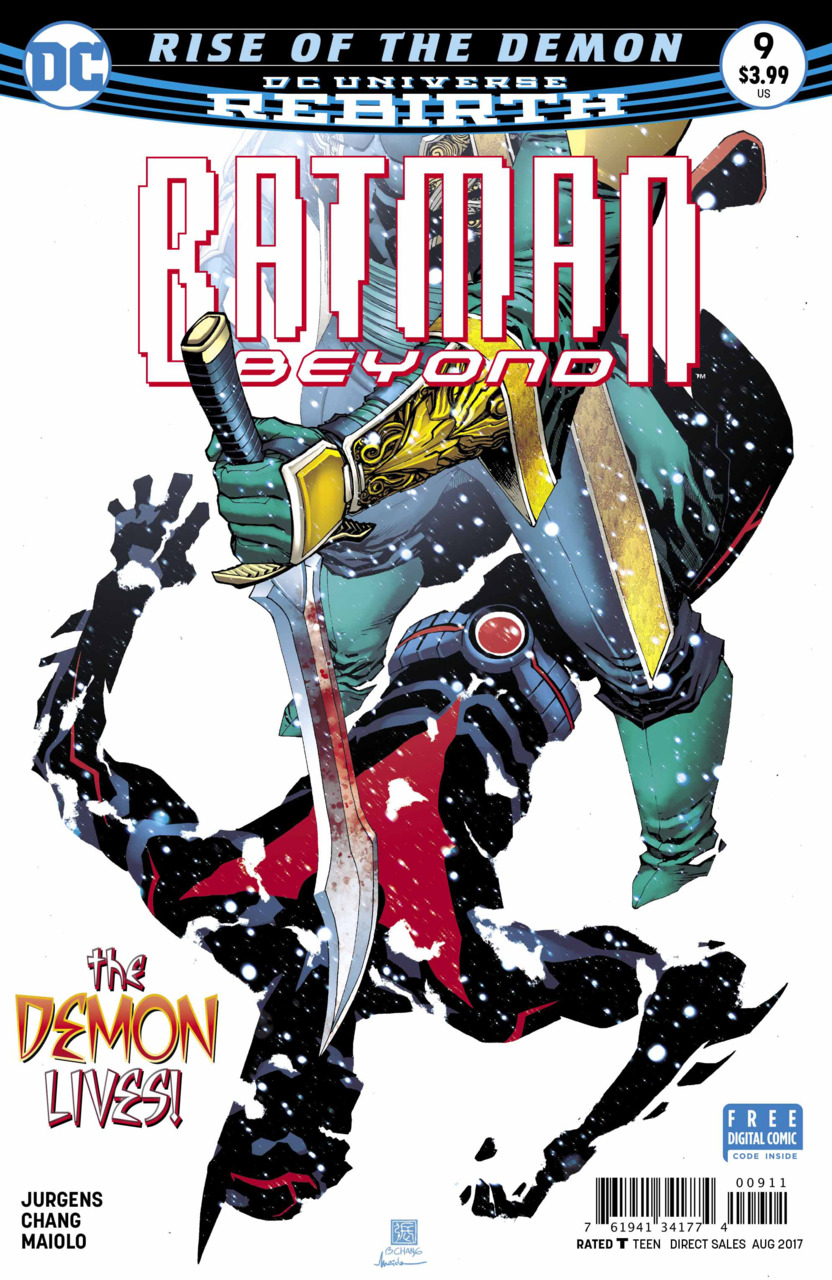 (Spoilers ahead) “Rise of the Demon Part 4”opens where the part three ended with Batman facing off with the Demon, Damian Wayne. The two start to fight Damian says that he did try on the suit but decided that he did not need it to be effective while Terry does. The fight continues between the two and Damian stops his troops from interfering.

In the cave Max and Matt are desperately searching for the Batmobile. They finally find it but it is more likely that Bruce allowed them to find him. He contacts the cave with an apology and that he has to handle the situation personally, the suit AI has cut off all communications. The two then get a video feed from Terry’s suit. They get a glimpse of Damian before the suit AI cuts them off.

In the Himalayas, Bruce starts his climb up the mountains. He remembers the time when he hung up the cape and cowl for good. Damian returned to Gotham from Europe. He assured Bruce that he cannot allow Gotham to suffer and he believed that Ra’s Al Ghul will capitalize on the absence of the Batman. Damian believed that Ra’s is making his move with a new lease on technology. Damian tells his father that he will take care of it and dons the Batsuit with the AI and takes off despite his father’s warnings.

Bruce remembers the last time he had contact with his son. Damian was in the midst of a battle and Bruce was urging him to return to the cave. Suddenly Bruce Wayne lost contact. When he arrived at the scene, everyone was gone including Damian. The only thing Bruce found was the tattered remains of the suit. Bruce believes that Ra’s set everything up. He knew that the suit would change Damian and that gave him the opening to recruit Damian himself.

Bruce’s memories are interrupted. Koru who is the son of Ubu, Ra’s right hand man intends to finish what his father could not. Bruce engages him but he is too old and weak to have much of an effect. Koru holds Wayne over the edge of a mountain.

The fight between Damian and Terry continues. Damian is able to blow Batman through the outer wall into the outside environment. Damian joins him outside. Damian knows that the suit is vulnerable to sound frequencies and he also knows the exact frequency needed. Damian turns up the volume on Batman. Damian manipulated Curare. He wanted her to seek out Batman and send him after Damian. Most of all Damian wanted to confront his own father.

Koru continues to beat Bruce in the mountains. He draws his swords to finish Bruce off when Bruce fires his grapple gun into Koru’s abdomen knocking him out. Bruce continues his trek to find Damian.

Bruce reaches the compound to see his son standing over a downed Batman ready to kill him and the best part is that Bruce is forced to watch. Next issue death sentence.

This issue answers some of the questions surrounding Damian Wayne. We learned that he was the second person to try the suit and as a result, he broke contact with his father presumable to make contact with his grandfather. Despite the backstory about Damian, the issue is basically your typical fight issue. We keep cutting in and out of the fight between Damian and Terry and we get a brief fight with Koru and Bruce. Other than that there was not else much to this issue. When I first read it it just seemed to end too quickly.

The art here is good, but we still have two red and black panels and I really do not know what it is supposed to mean. I would prefer that those panels be colored like the others. The backgrounds however really gave me the impression that the characters were in the mountains during a raging snow storm.

Overall, it was good but again not great. I think it would read better as a trade.