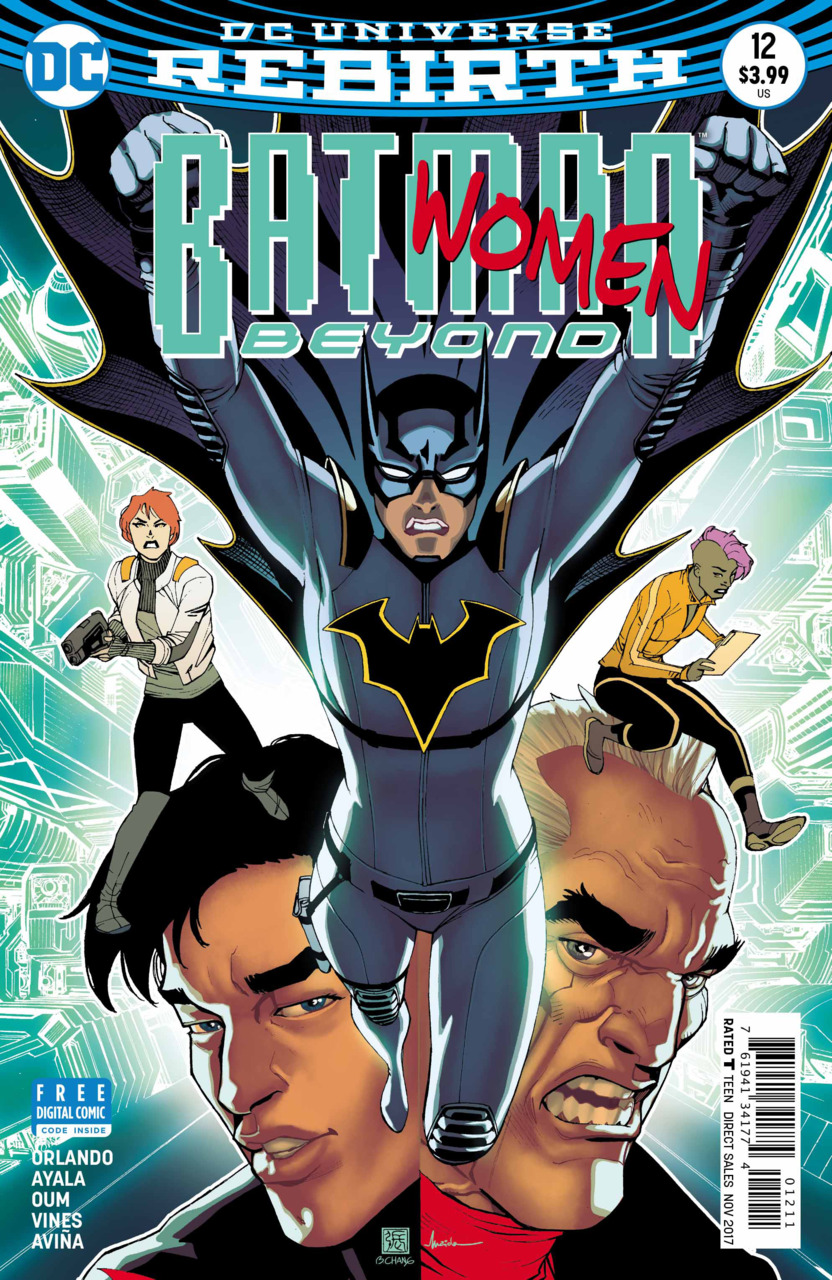 Overview: While Terry and Bruce are abroad dealing with the League of Assassins, Max and Matt discover the appearance of a Batgirl in Gotham. Despite their differences, the group must work together to rescue Commissioner Barbara Gordon.

Synopsis (spoilers ahead): While investigating a seemingly abandoned building in Crown Point. Barbara Gordon is kidnapped after coming across a stockpile of illegal material. Meanwhile in the Batcave, Max and Matt monitor Neo Gotham for any distress signals. All appears quiet until they receive the alarm that Gordon had been taken. Max decides to suit up, despite Matt’s protesting.

Over in the Point, a group of girls try to decide on what they want to do with their evening. They begin talking about recent criminal activity in the Point and its apparent that none of them are confident in the Batman’s attention to their side of the city. After splitting from the group, Nissa is atop a rooftop wearing a Batgirl uniform. She begins beating up various gangs to try and figure out who is trying to push drugs into local middle schools.

Both arriving at an abandoned building, Batgirl and Max meet face to face. They exchange comments about growing up in different parts of Gotham and how that has affected their strategies for taking down criminals. They agree to work together. Inside the building, Gordon is interrogated by Flass’s son who turns out to be in charge of a group of corrupt cops dealing drugs. Just before Flass can carry out the death sentence on the commissioner, Batgirl and Max fly into the room and begin to take down the cops. With some tricks from Max, the three are able to take down all the cops including Flass.

A few days later, Max meets with Batgirl on a rooftop and offers her a communicator and an invitation into the Bat-family. Batgirl agrees to think about it, but is just glad to be fighting alongside some other Batwomen.

Analysis: While reading this issue, I found myself frustrated at different points in regards to both the artwork and the writing. Although we did get some potentially strong female additions to this futuristic Bat-family, the issue was not a good debut of these characters. Beginning with the artwork, I never want to be too harsh in my reviews if the art does not connect with me as art is always subjective. That being said, its not a good sign when you start an issue and think “I wonder why that man just got kidnapped” only to find out that the “man” was, in fact, Barbara Gordon. I know she has short hair in the future but it was the facial structure that confused me. This was an issue throughout the issue in terms of conveying real emotion. There just did not seem to be a lot of attention to detail which resulted in artwork that looked rushed. I will say that the new Batgirl look was interesting and I am intrigued as to how her overall character will fit into the Bat-family.

The story itself was interesting enough but still felt rushed in a way. It just felt like this was thrown in to cover for time before Terry and Bruce return to Neo-Gotham. The dialogue felt forced when Batgirl and Max discuss being from different walks of life. I also was frustrated with the numerous references to these other terrible neighborhoods on par with Crime Alley. Introducing Flass as one of the main antagonists was interesting given that Gordon had to face off with him, but hopefully this isn’t a one-and-done deal with the police corruption. That could be an interesting thread to follow when Terry returns.

Final Thoughts: Overall, this issue felt very much like filler and ended up starting a few new characters off on an uneasy first step. Hopefully with Bruce and Terry returning, we can see some real development of the Bat-family of Neo-Gotham.