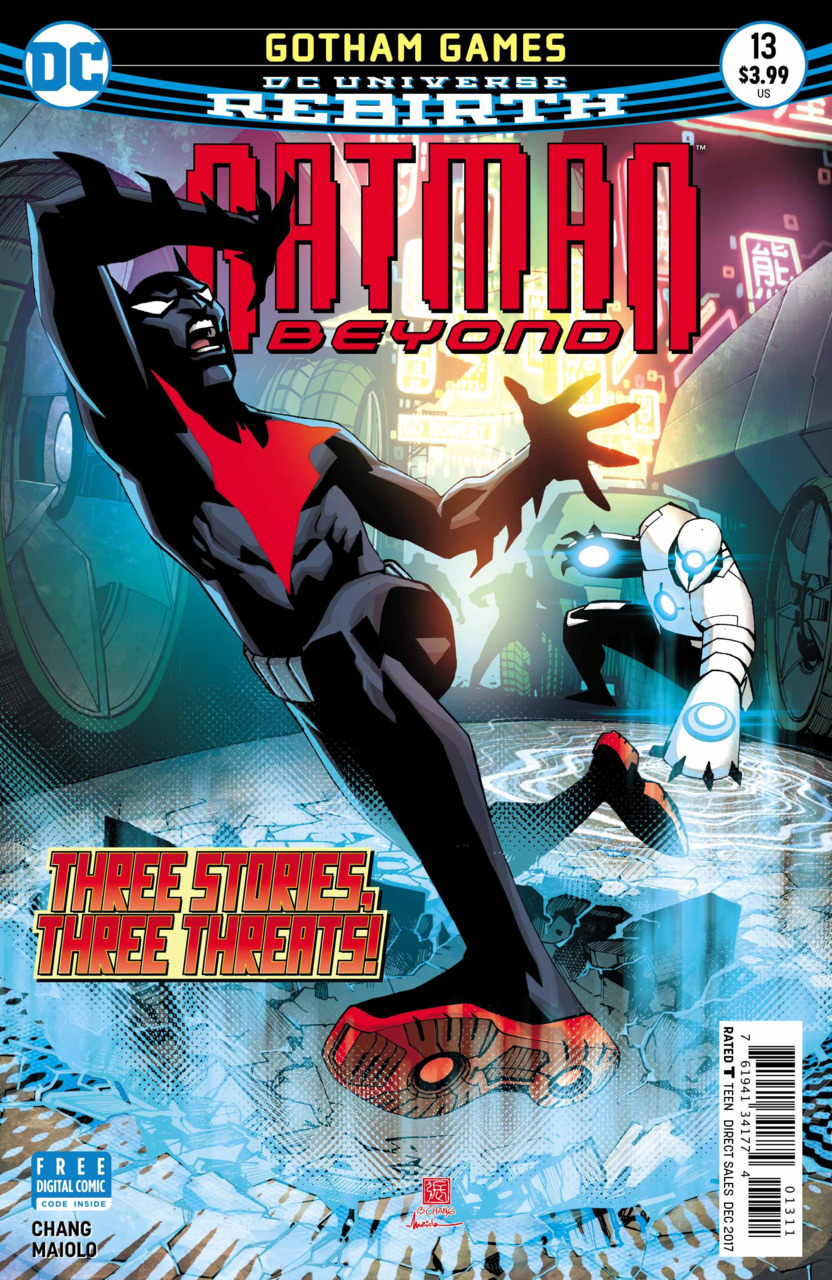 Overview: Set in the days following Brother’s Eye’s defeat, Terry acclimates to the new status quo in Neo Gotham. Faced with a city wide threat, he teams up with some unlikely allies.

Synopsis: Opening in the tunnels under Neo Gotham, Batman is caught in a fight against an old enemy, Shriek. While fighting, we learn that Shriek had been in Blackgate Penitentiary when Brother Eye took over. It was just following the fall of Brother Eye that he went into the old subway lines to shelter and protect those who had taken refuge in the tunnels’ shadows. Above the city, the defense network of Neo Gotham is comprised and police cruisers are systematically targeted.

Following his exit from the tunnel system after discovering the refugees Shriek was protecting, Terry comes face to face with another meta human called Hacker. With his ability to hack into any electronic system, Hacker begins to use his surroundings to attack Batman. Hacker claims no responsibility of the defense network being disabled and only says he is a protector of Neo Gotham’s Chinatown. In a flashback, we see that he gained these abilities after attempting to hack Brother Eye.

In a pursuit to manually reboot the city’s mainframe and still make it in time to see his brother’s basketball game, Terry confronts the true culprit of the system shutdown, Freon. An old villain of Batman’s who was horribly transformed into a nuclear battery, she reveals that she is planning on destroying the city. It’s clear that she is mentally unstable with randomly calling out her old boyfriend’s name. However, she is very powerful and able to gain the upper hand over Terry. Just as his suit beings to fail in the presence of such strong radiation, Hacker and Shriek arrive to help him take down Freon and reboot Neo Gotham’s defense network.

The issue ends with the trio admitting that they could work together again someday. Terry flies off and is able to see his brother’s team win the Gotham Games.

Analysis: As another month goes by, we get what appears to be another filler issue. Although it provided us with some backstory into events following Brother Eye’s defeat,, the issue ultimately did not contain any real threat and less impact even as a standalone issue.

Although the writing and dialogue was par for the course, the character of Terry felt off to me. As much as Batman Beyond is about a non-Bruce Wayne Batman,which inherently means he will not be as skilled, these Rebirth stories take place after Future’s End where we saw an experienced Terry truly carrying the mantle of Batman. This story takes place right after his “rebirth” and yet we see him struggling against some pretty minor villains. Hopefully some of these characteristics of Terry are kept a little more consistent going forward.

Another aspect of the issue that left me dissatisfied was the time jumping that took place through the pages. I felt very confused by the flashbacks on top of the fact that the whole story itself was a flashback to Terry’s return to Neo-Gotham.

The artwork in this issue fluctuated for me. I did not really get interested in the “present day” scenes as the artwork felt too cartoony. However, when the scenes contained flashbacks with Shriek, Hacker, and Freon, I found myself forgetting I was reading a Batman comic. The pencil work and colors felt an indie comic about alien invasion or a scientific experiment gone wrong. I found myself looking back on those panels multiple times while reading this issue,

Final Thoughts: Overall, I am looking forward to getting back to the true present day and seeing Terry and Bruce’s return to Gotham after facing off against Damian.