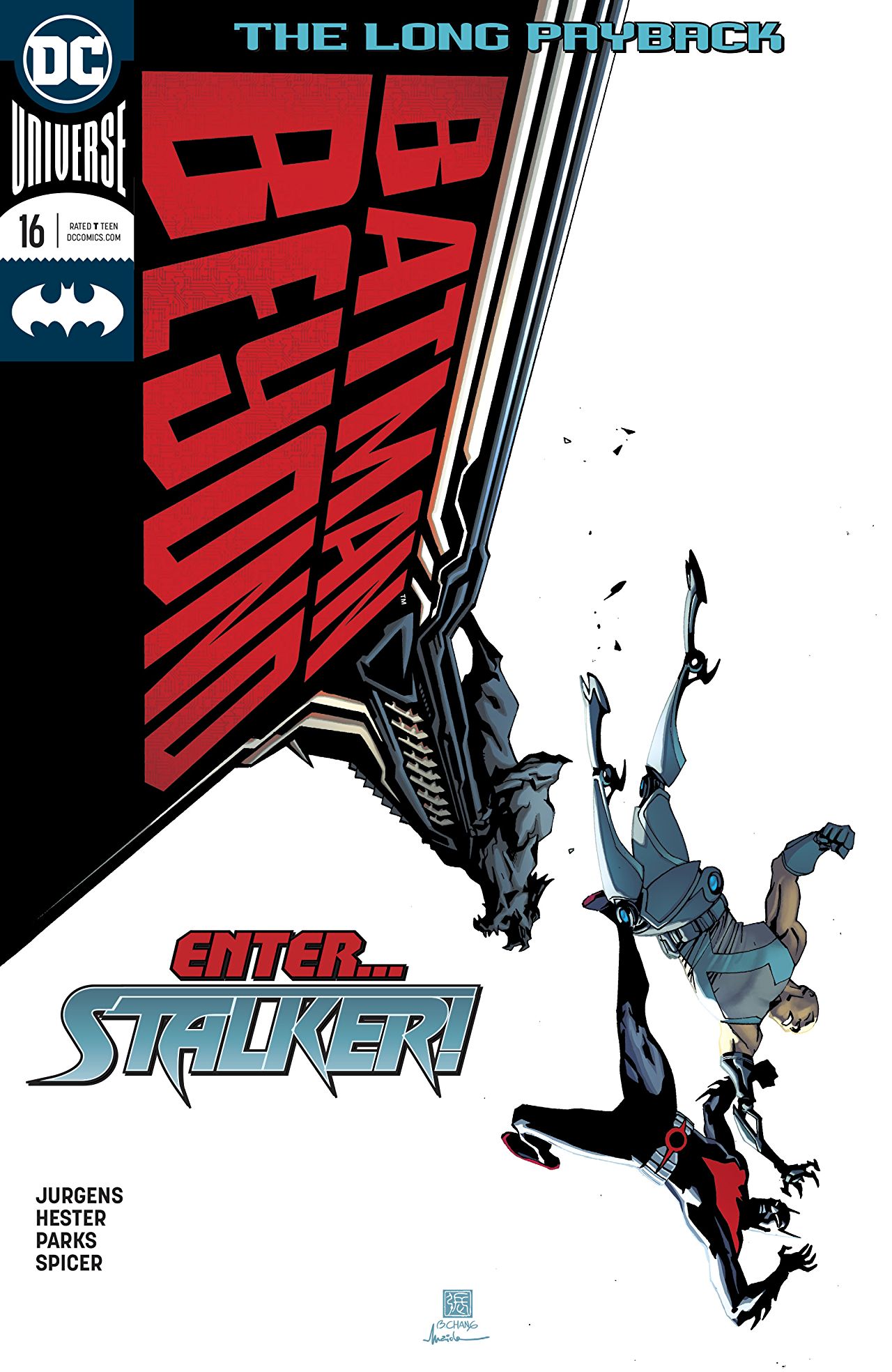 Overview: Terry is able to save Dana during the attack from Stalker but finds himself pitted against his old ally sent to kill him so his people won’t starve.

Synopsis (spoilers ahead): The issue picks up right after Terry and Dana fall from the building after being attacked by Stalker. Terry remarks how Stalker was just a big game hunter at one time who had made peace with Terry long ago. Now, the old foe is intent on killing Terry. Terry is able to glide Dana onto a nearby rooftop so that he may go on the offensive and take the fight to Stalker.

Stalker remarks how Terry’s tactics are more brutal as well as his tech being more highly advanced. Stalker states that, despite these new advantages, he has upgraded his own cybernetics. While they battle above the city, Stalker reveals that his people are starving since the invasion.

While the pair fight, Barbara Gordon is in the streets investigating a new vigilante in Gotham. She is interrupted by seeing Batman and Stalker battle. Stalker hijacks a flying bus and uses its thrusters to try and kill Terry. While watching, Bruce walks Terry’s brother through what he would do if he were still Batman. Stalker’s plan fails after Terry destroys the thrusters. The ship crashes into Gotham in which both Batman and Stalker amazingly survive.

In the rubble, Terry is able utilize his cloaking tech to sneak up behind Stalker. Despite the element of surprise, Stalker gains the upper hand and holds Terry by the throat. The issue ends with him telling Batman that for his people to live, Terry must die.

Analysis: After finishing this issue, I could not decide what had actually happened in this issue. It was pretty much a fight that lasted an entire issue with maybe a few minor developments happening outside the main plot. The artwork helped, but the overall direction of this arc is steadily declining and getting weaker.

I will say it still is interesting that Stalker is fighting for his people who were abandoned after the invasion that devastated the war. He is not after Batman just for the “love of the hunt” as he used to. It does not excuse killing by any means, but it at least added background to his actions. The other development of the silent vigilante poses some interesting questions as to who it could be. She may tie back into the Batwoman fill in issue, so hopefully that will be revealed soon.

Regarding artwork, Phil Hester’s pencils continue the same look from previous issues. I still am having trouble seeing Barbara Gordon in these issues as she looks quite masculine and confuses me every time i see the panel before reading the dialogue. The inking and coloring by Parks and Spicer makes up for the lack of substance in the story and plot. They carry the vibrant and neo-gothic sci-fi aesthetic that was achieve in the original animated series.

Final Thoughts: With no developments in Terry and Stalker as they both just brawled the entire issue, it certainly leaves a lot to wish for in the next issue (titled “Revelations”). I can only hope that we will find out who the mysterious and murderous financial backer to Stalker is by next issue.