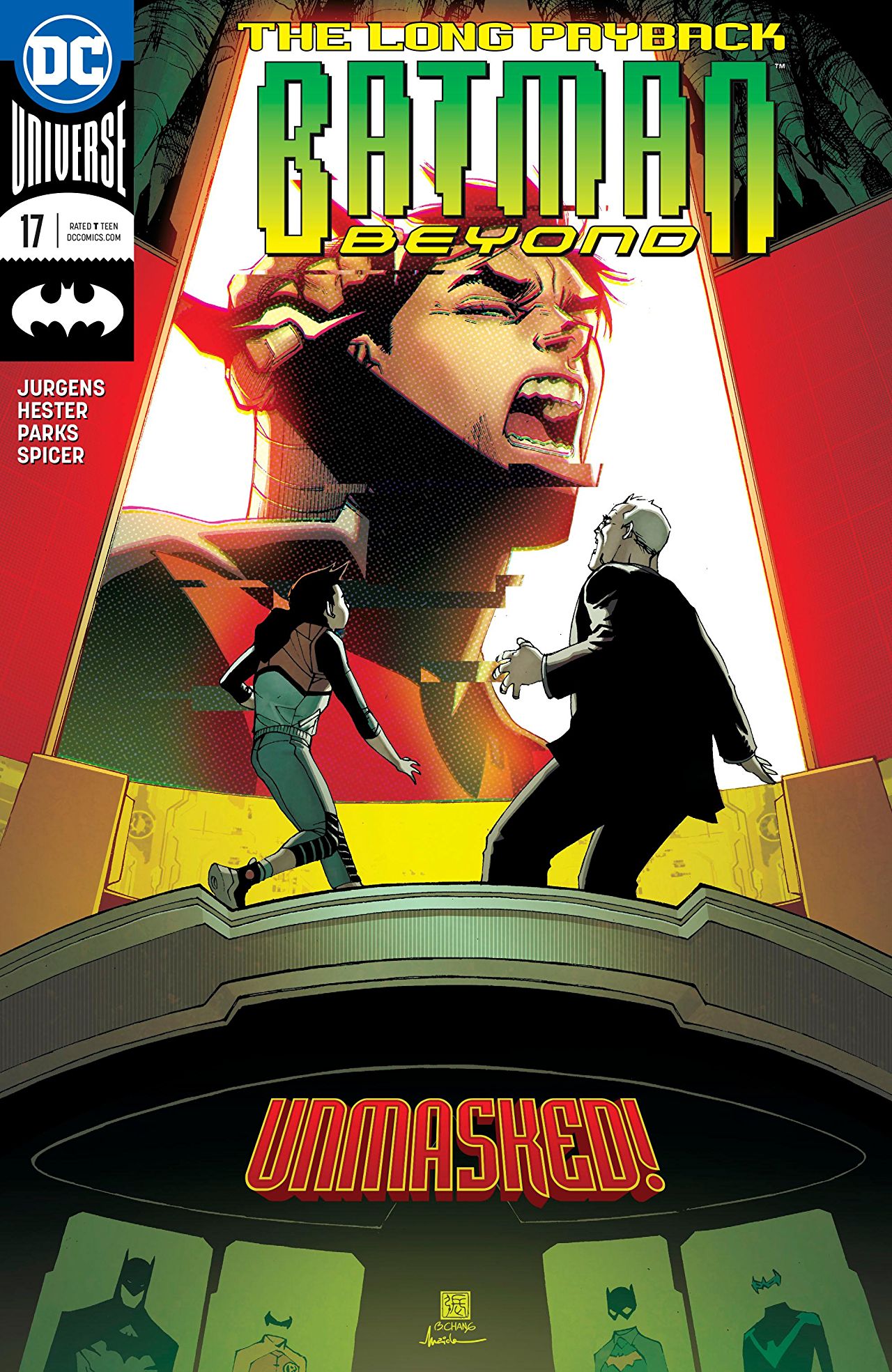 Overview: Stalker’s benefactor and a figure from Terry’s past are revealed as Batman and Stalker continue to fight.

Synopsis (spoilers ahead): A mysterious figure is in a lab watching footage of Batman fight Stalker. He talks to himself about the hypocrisy of Batman’s mission and mask before pressing a button to reveal his own mask. Back at the scene of the fight, Stalker is about to unmask Batman before killing him as all of Gotham watches on a live feed. Batman uses the electrical charge from his suit to stop this from happening. Dana calls Bruce and asks him to do something to help Terry. Bruce tries to get out of his wheelchair but the effort leaves him exhausted.

Elsewhere, at an undisclosed location, the masked intruder to Wayne Manor is watching the live feed and decides to help Batman in order to prove to Terry that she has changed. We get a glimpse of her blonde hair and another costume, and it’s confirmed later in the issue that this is Melanie Walker, aka Ten, formerly of the Royal Flush Gang.

Batman and Stalker continue to fight and Stalker continues to escalate the ferocity of his attack causing more damage to their surroundings. Stalker eventually gets the upper hand on Batman and is about to skewer him with a plasma bore but right before the fatal blow is struck, Stalker’s benefactor Payback appears and chastises him for disobeying orders. Payback then starts fighting Stalker and cuts off his cybernetic legs. Batman then starts fighting Payback and goes to save Stalker. Payback tries to stop them escaping just as Ten shows up to help Batman. Bruce and Matt are watching everything unfold back in the Batcave and Bruce explains that Melanie likes Terry and doesn’t know that Batman and Terry are the same person. Payback restrains Ten and tells Batman to come find him before teleporting away with Ten. Batman notices that Payback has dropped some type of grenade before teleporting and he jumps out the window with the incapacitated Stalker in his arms.

Analysis: This series has had many references to the animated TV show and that continues in this storyline. Stalker and Ten are two great characters to include in any Batman Beyond story. Unfortunately, they aren’t really presented with much consistency in this issue. When Stalker first appeared in this storyline, I felt the character was being set up to be a compelling anti-hero. He’s presented as a reformed criminal who is going back to his old ways only because he needs food for his starving village. It’s a difficult position for anyone to be in and it allows the reader to empathize with the character a little bit even if we don’t agree with his methods. That’s why I’m so confused about why Stalker would jeopardize his village getting food by disobeying orders and trying to kill Batman. It makes absolutely no sense, especially when Stalker holds no personal animus towards Batman as they had previously “come to an understanding”. I’d like to see Stalker’s actions aligning more with his motivations in future issues.

Speaking of anti-heroes, Melanie Walker is one of my favorite characters from the animated series because I think her storylines are some of the most compelling episodes of the show. I’m happy we are getting to see her in the comics, but her actions also do not make sense. We now know that she was the masked figure that broke into Wayne Manor back in issue #15. We don’t know why she did that or why she stole a picture of Terry. We do know that Melanie has been using a nondescript costume instead of her Ten costume to moonlight as a vigilante taking down bad guys. According to Bruce, she doesn’t know Terry is Batman and she is trying to reform herself to prove to Terry that she has changed. The problem is how would Terry know she has changed if she is doing good things as an anonymous vigilante? And how is breaking into the home of Terry’s boss proving that she has changed? How did she know Terry had moved in? How does Bruce know Melanie is trying to reform herself? Why does Payback seem to think that Ten is more of an enticing bait to Batman than another person would be? It’s certainly plausible that I’ve missed some things, but I really don’t think we’ve got substantial answers to those questions.

The art in this issue evokes memories of the animated series. It seems like Hester has made a concerted effort to try and reproduce the aesthetic of the show but remix it with his own style. The jagged, irregular panels during Batman and Stalker’s fight work really well to convey the chaos of the scene in a building that is collapsing and on fire. I’d like to see a bit more detail in some of the panels as I think it can be a bit too abstract at times. Like any issue that devotes most of its pages to action sequences, it’s really important for the lettering to be done at a high level. I think Lanham does an excellent job with that in this issue.

Final Thoughts: Unfortunately, in my opinion, this is not a very well crafted issue. Many of the characters’ actions do not match their motivations and there are more than a few inconsistencies. On the positive side, we are starting to see more characters from the classic TV show make appearances. That being said, Payback as the big reveal doesn’t really do it for me especially when it’s heavily hinted at that it is Kenny Stanton’s father and not Kenny himself. It is very doubtful that Payback’s motivations won’t be fully explained in the next issue.