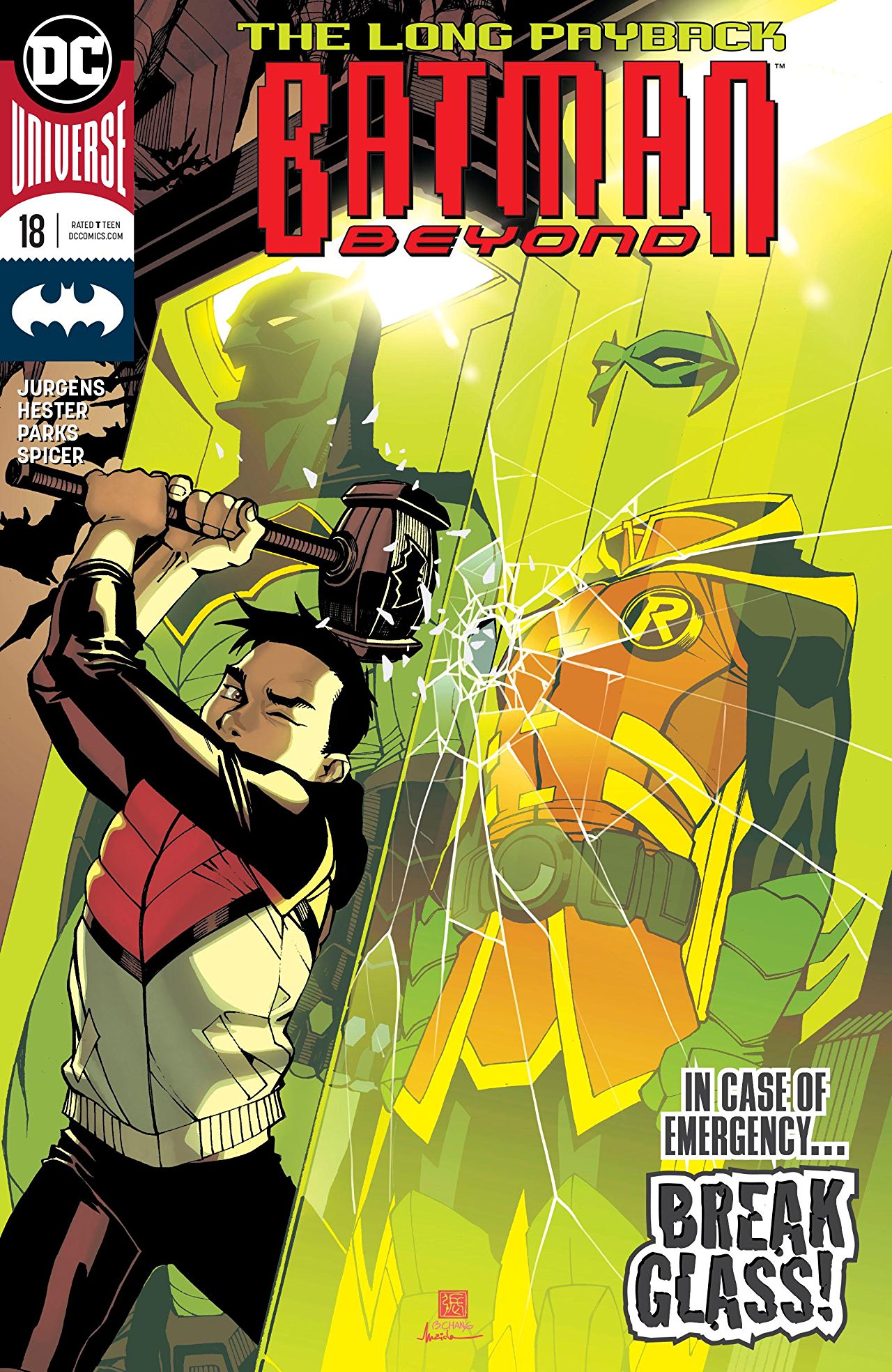 Overview: Batman and Ten appear to be at the mercy of Payback, but unforeseen help in the form of a new Robin might be on the horizon.

Synopsis (spoilers ahead): Payback arrives back at his lair with the captured Ten and he intends to use her as bait to lure Batman. Meanwhile, Stalker and Batman continue their fall out of the burning building as Bruce and Matt desperately try to communicate with him. Terry is unconscious so Stalker uses Ten’s hover-card to save him because he feels that he owes him a debt. Stalker deposits a now conscious Batman on the sidewalk and leaves after telling him that they are even. Batman then saves civilians from falling debris and some of the fire crew from explosions.

Payback watches the drama play out from his lair and remarks that Gotham is finally getting what it deserves. Ten tries to stage a sneak attack but the attempt is foiled. Payback then hijacks a news feed to broadcast live footage of him fighting with Ten. As Batman spares a minute to talk to commissioner Barbara Gordon, he is teleported against his will directly into a glass tank of water in Payback’s lab. The tank is weaponized with electric currents and sonics but the high tech Batsuit is able to keep Terry alive. Batman tries to break out of the tank as he watches Payback choke Ten on the other side of the glass. After a few punches, Batman succeeds in escaping and staggers upright to fight Payback. Back at the cave, Bruce and Matt believe they are missing a piece of the puzzle and try to figure out Payback’s motives. Bruce’s research reveals that Kenny’s father never came to visit him in the rehab center. Kenny was routinely bullied there and eventually committed suicide.

Meanwhile, Batman and Ten continue to fight Payback and he reveals to them that it’s too late for Kenny because Kenny is gone. He pulls off his mask to reveal himself as Kenny’s father and he holds Batman responsible for killing his son. Payback activates some laser turrets that fire blasts that hit and restrain Batman. Bruce thinks this is too much for Terry and tries to get up from his wheelchair but he is still unable to walk. Matt suggests that he can help because he has seen Damian’s training videos and done the drills repeatedly. He uses a hammer to break the case holding the Robin costume and takes it with Bruce’s blessing and a directive to be careful and follow instructions. In addition to the Robin costume, Matt leaves the manor with a flying Robin hoverbike.

Analysis: This issue finally reveals that Payback is actually Kenny Stanton’s father. The reveal itself is treated as a mystery being solved, but it was somewhat anticlimactic for me as I’ve long suspected that Payback is actually Kenny’s father. I actually made that prediction in my review of the previous issue. Stalker conveniently makes his departure here and I’m not sure it’s explored properly. He was portrayed as being desperate for his payment of food and now he just meekly leaves after everything didn’t work out. I feel like the logical thing for him would be to team up with Batman to take out Payback after Payback reneged on their deal.

Payback’s plan is also not very coherent or logical. His goal is to kill Batman and make Gotham suffer, but he seems incapable of actually doing that despite an abundance of opportunity to do so. In this issue, he displays an ability to teleport Batman to his lab. If this was possible, why didn’t he just do that in the first place? There doesn’t appear to be any special reason given for why Payback is able to accomplish this feat now, so it seems strange that he is only doing this now. I love the futuristic world of Neo-Gotham, but this kind of tech feels like too much of a cheat. It really took me out of the story because I thought it was a little too unrealistic.

Obviously, the big take away from this issue, one that potentially sets up a permanent change to the status quo in Neo-Gotham, is Matt assuming the mantle of Robin. I don’t know yet if this is going to be a permanent move and I don’t really know how I feel about it. With the exception of one Justice League TV episode, Terry has always been portrayed as being younger and not possessing the same level of maturity and self-assurance as Bruce when he was Batman. I’m not sure that he’s quite ready for a Robin, but with Bruce around to mentor both of them, it could work. I’d like to see Matt get a lot more real training before that happens. I don’t care how many training holovids a person watches, it’s not the same as the real thing. I feel torn between wanting to see a Bat-Family in Neo-Gotham and also wanting the cycle of Robin to end. I would definitely like to see Terry and Bruce bring in the new Batgirl, Nissa, as a full partner of Batman before giving him a Robin to work with.  I have one last random thought regarding Matt taking the Robin costume that didn’t really fit in anywhere else in the review.  Why didn’t Matt just open the case instead of breaking it with a hammer?  Bruce is right there in the cave so there is presumably an easy way to open the case.

The art in this issue is the same quality of work we have been seeing for the past few issues. Hester continues to do a good job replicating the look of the animated TV show. Gone are the more irregular panels from the last issue as this issue uses a more traditional layout. This is an action-packed issue, so Lanham had a lot of work to do with the lettering and he does a good job making sure the reader feels like they are along for the ride.

Final Thoughts: This issue was kind of underwhelming in my opinion. I’ve wanted to like this story because I’ve enjoyed Jurgens’ work with Superman, but I haven’t really been able to get past the plot holes. Between Stalker’s quest to feed to his people and the emotional story of Kenneth Stanton’s life, it feels like this story should have much more heart than it does. I expect the next issue will explore how Batman and Ten escape Payback. I’m sure we will also see Terry’s reaction to Bruce letting Matt go out as Robin without consulting him. I’d also like to see some progression in the subplot regarding Melanie/Ten’s relationship with Terry.