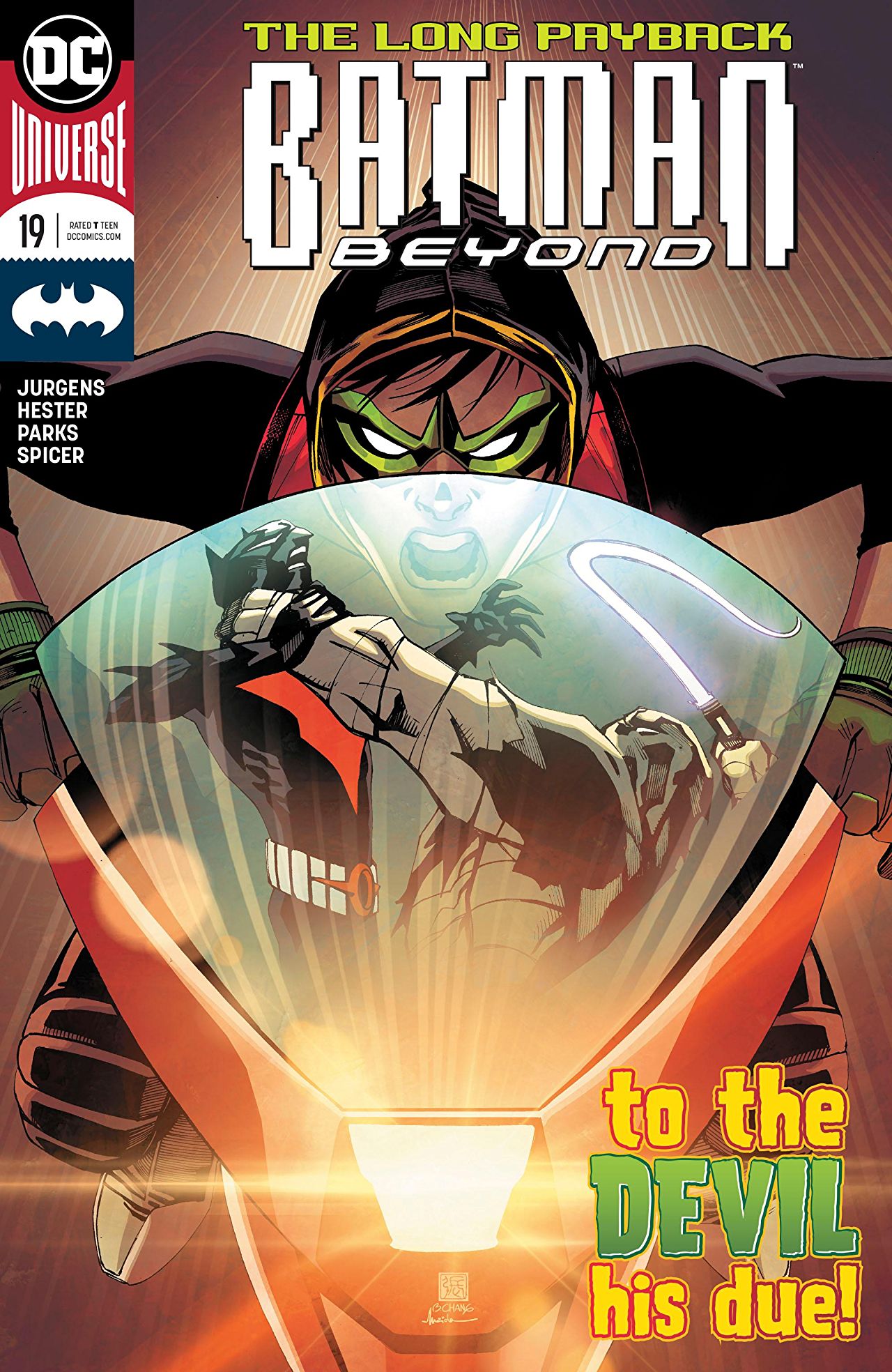 Overview:  Terry receives help from Matt to end the fight with Payback, but that doesn’t mean he is thrilled with Bruce’s decision.

Synopsis (spoilers ahead):  Dana races through Wayne Manor into the Batcave and demands that Bruce help Terry. She is shocked to find that Bruce has sent Matt to help Terry and repeatedly chastises him for putting a child in danger. Bruce tells Matt that he should do exactly what he’s told. He then tells Dana that Matt is Terry’s best chance. Matt fires rockets to take out the power in Payback’s lab and then does the same to the backup generator. While Payback tries to reboot his systems, Ten frees Batman from his shackles. Batman then starts fighting Payback.

As the fight escalates and fire and explosions emanate from the building, Matt is tempted to go in and help Terry but Bruce forbids it. Payback grabs Ten by the throat as she tries to help, but Matt crashes his hoverbike through the wall and into Payback. Batman is outraged that Bruce allowed Matt to don the costume and enter a volatile situation. Payback quickly shifts strategy and targets Matt but Batman is too quick and cuts the power conduits to his suit. After subduing Payback, Batman grabs Matt and makes a quick exit, leaving a nonplussed Ten behind.

Batman and Matt arrive back at the Batcave and Terry immediately berates Bruce for allowing Matt to go into danger like that. Matt seems to think that wearing the Robin costume will become a permanent change but Terry is adamant that it shouldn’t happen. Terry also says he has a debt to pay and he uses Wayne-Powers resources to bring food and aid to Shaka and his village.

Analysis:  In my last review I mentioned that I felt some reservations about Matt being Robin because of his lack of training and age. In this issue, Dana serves as the rational voice as she constantly questions the wisdom of such a move. Bruce himself knows the risks and he is too smart to be blind to them. He’s very much conflicted on the matter and wonders if he could have done something differently or if it even matters now that it worked out. It’s sad to see Bruce still struggling with difficult choices, but at the same time, it’s what makes his character so compelling in the Beyond time period. He’s a man of action who now has to coach from the sidelines and struggles with that. As Batman, he’s never hesitated to sacrifice himself for others but now he has to watch others make that sacrifice. It must be incredibly difficult for him to come to terms with that.

While that is the most compelling aspect of this book, the focus remains squarely on the fight with Payback. In my opinion, it’s a little too drawn out and takes too much time to reach its conclusion. While Ten did free Batman during the power outage, her role in this story arc has seemed really random. There doesn’t appear to be any reason for her to be there other than to free Terry. I also didn’t really like that Terry was using Bruce’s name out loud while fighting Payback. Ten seemed to recognize Matt’s voice when he arrived and was surprised by how quickly Batman left the scene so I wouldn’t be too surprised to see her get close to discovering Batman’s identity sometime in the near future. The art in this issue is decent but I felt like this issue would have benefited from having more detail in the facial expressions. I think the current style has been a nice homage to the tv series but I’m ready for a new art team to get a chance in the next issue.

Lastly, we get to see Shaka’s storyline get resolved with his village receiving the aid he was promised from Payback. It’s nice to see Terry continuing the philanthropic work that Bruce championed in his younger days. It would be nice to see Terry take on more responsibility in a role with Wayne-Powers as I don’t think that’s ever been explored in any Beyond story.

Final Thoughts:  A solid conclusion to a story arc that has had its ups and downs and perhaps went on a bit too long. This issue and story arc will always be remembered for being the first time we see Matt as Robin. It’s still unclear as to whether this will be a full-time thing, but I’d guess that Matt retains the title of Robin going forward. I’m looking forward to seeing where we go with the next story arc.