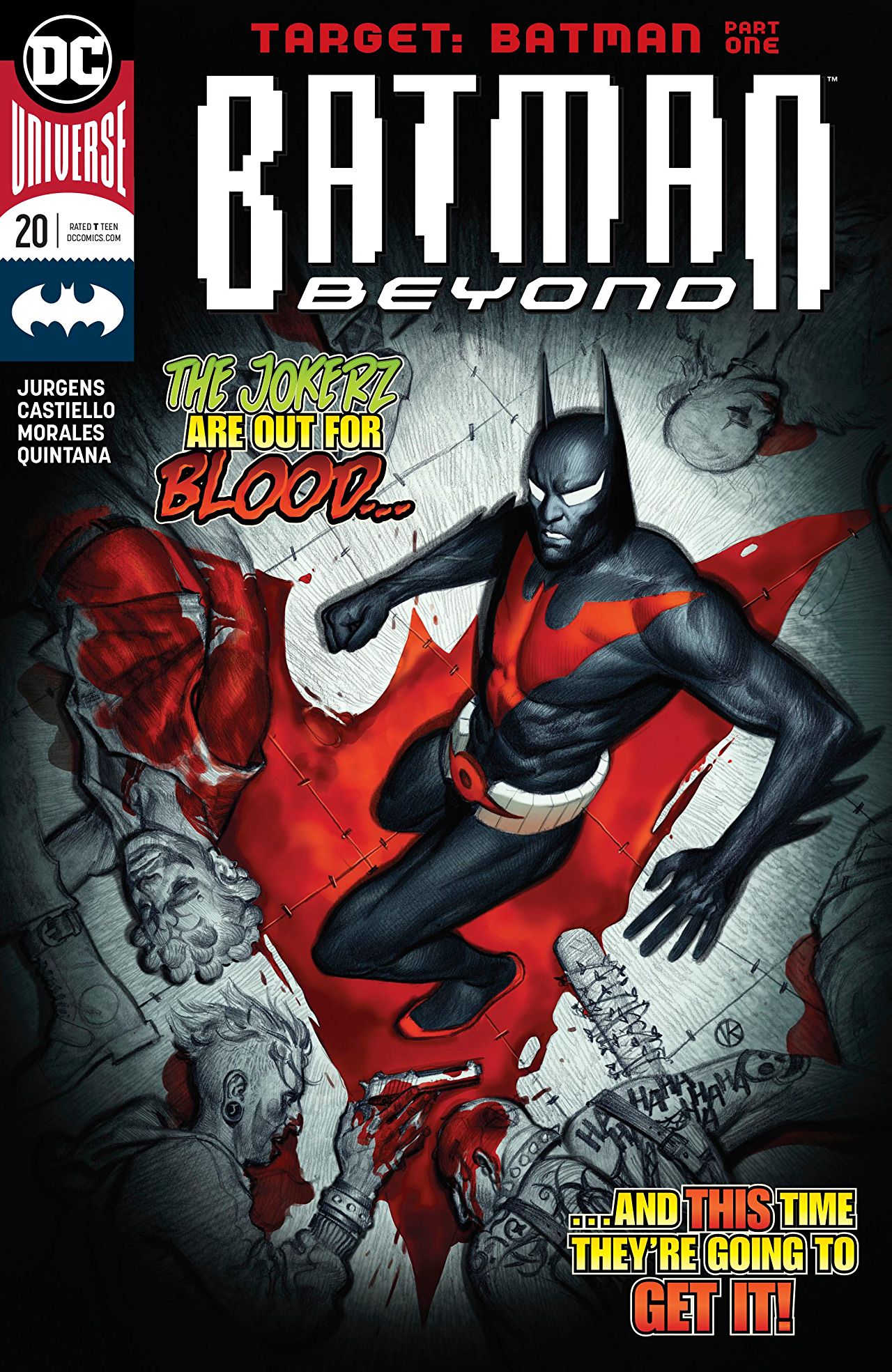 Overview: Batman and Robin’s new partnership gets off to a rocky start. Meanwhile, there’s some serious drama brewing for Terry’s personal life when Melanie decides to reconnect with him.

Synopsis (spoilers ahead): A Channel 52 News broadcast from Jack Ryder and Adalyn Stern is interrupted by breaking news of an active shooter at police headquarters. With several officers and civilians down, Barbara Gordon is in the crossfire trying to talk down the shooter who is a member of the Jokerz named Scab. Scab appears to be hallucinating and says he’s seeing a Bat-Monster everywhere.

Back at Wayne Manor, Terry and Bruce continue to discuss Bruce’s decision to let Matt don the Robin costume. Bruce stands by his decision and shows Terry that he has built a prototype Robin costume for Matt. Bruce stresses that it’s safer for them to allow Matt to be Robin and train under them than it would be for Matt to sneak out and try to be Robin on his own.

The debate is interrupted by the arrival of Melanie Walker at the mansion. Terry and Melanie talk about what happened between them and what they’ve been doing since they last spoke. Terry is so occupied with their conversation that he doesn’t hear Dana pulling up to the manor. She’s in the process of leaving him a message to ask him to stop being Batman when she spies Terry and Melanie kissing through the trees and leaves visibly distraught. Terry and Melanie’s moment is interrupted by Matt hinting that Batman is needed.

In the Batcave, Bruce explains the active shooter situation to Terry as he suits up. Matt asks to accompany Terry and Terry eventually relents. Batman and Robin arrive at police headquarters just as Scab seems ready to escalate things. Barbara is shocked that Bruce allowed Matt to become Robin and Robin tries to clear the area. Scab fires a machine gun at them but Batman deflects the bullets off his suit. He uses a batarang to knock Scab out and berates Robin for not following his orders.

Elsewhere, Adalyn Stern gets a lift back to her apartment from her broadcast partner Jack. Upon entering her place, she is ambushed by a monster that looks like Batman.

Analysis: This was a promising start to a new story. It was really nice to see Bruce’s decision to give Matt the Robin costume put under the microscope again in this issue. Bruce and Terry going back and forth debating the matter really demonstrated that these characters have a solid grasp of the gravity of the decision that has been made. While I previously disagreed with Bruce naming a Robin that was as young and naive as Matt, I’m on his side now that Matt has already got a taste of being Robin. It’s far better he does things with supervision than by doing something stupid on his own. Bruce mentions the Robin costume is only a prototype, and therefore probably temporary, so I don’t want to give an opinion on it just yet, but it was very schway to see a Batman and Robin partnership again.

I shouldn’t be surprised that Melanie returned here as there were some unresolved plot points involving her from the previous story arc. Terry creates some unnecessary drama for himself by kissing her in front of Dana. I have a hunch that Melanie is in the story for some other purpose other than just to be part of a love triangle. With Catwoman’s reformation in the pages of the main Batman title, it would be interesting to see Jurgens parallel that here with Melanie.

Jurgens also brings Jack Ryder into this story. Ryder has been a well established, fringe character in Gotham for years now, and as many readers already know, Jack Ryder’s alter ego is the Creeper. It’s possible he’s become reformed over the years and has his old job back, but his proximity to Adalyn’s place when the Bat-Monster shows up could be hinting at something more nefarious.

There were a couple of things in this issue that struck me as being a little peculiar. First, while Terry mentions that Melanie stole his picture, he never asks her why she did it. If I had to guess, I’d say she stole it because she missed him but that still strikes me as very weird and extreme behavior. Another strange moment was when Dana was leaving Terry a voice message as she was already on the grounds of Wayne Manor going to see him. It seems like the message was just exposition for the reader to understand why she was there because it doesn’t make sense for someone to leave a message when they’re mere seconds away from seeing the person.

A new creative team took over the art for this story arc and it’s an upgrade in my opinion. While I appreciated how much the last story arc tried to pay homage to the TV show, the art in this issue is more detailed. Bodies and faces are drawn with more texture and are less geometric. Barbara and Bruce look nothing like they did on the show but they look very much like older versions of their comic book selves. I think that’s a good thing because it helps establish a visual link between present-day Gotham and future Neo Gotham and that is really important when telling a story set in the future. Castiello and Quintana’s version of Neo Gotham manages to strike a careful balance between the traditional dark tone of Gotham and the bright lights of a modern futuristic city. I also enjoyed how the art team created interesting designs for the technology of the future like Bruce’s hover-wheelchair, Dana’s phone and the design of the taxi. These are small details but I feel they really contribute to immersing the reader in the world of Neo Gotham.

There is an also what appears to be a lettering error in the panel at the bottom of the page where Terry is talking to Melanie. I believe the higher word balloon should belong to Terry and the lower one to Melanie as that is the only way it makes sense. That will be something to correct for the trade edition.

Final Thoughts:  A solid start to what promises to be a very interesting story for Terry and Matt.