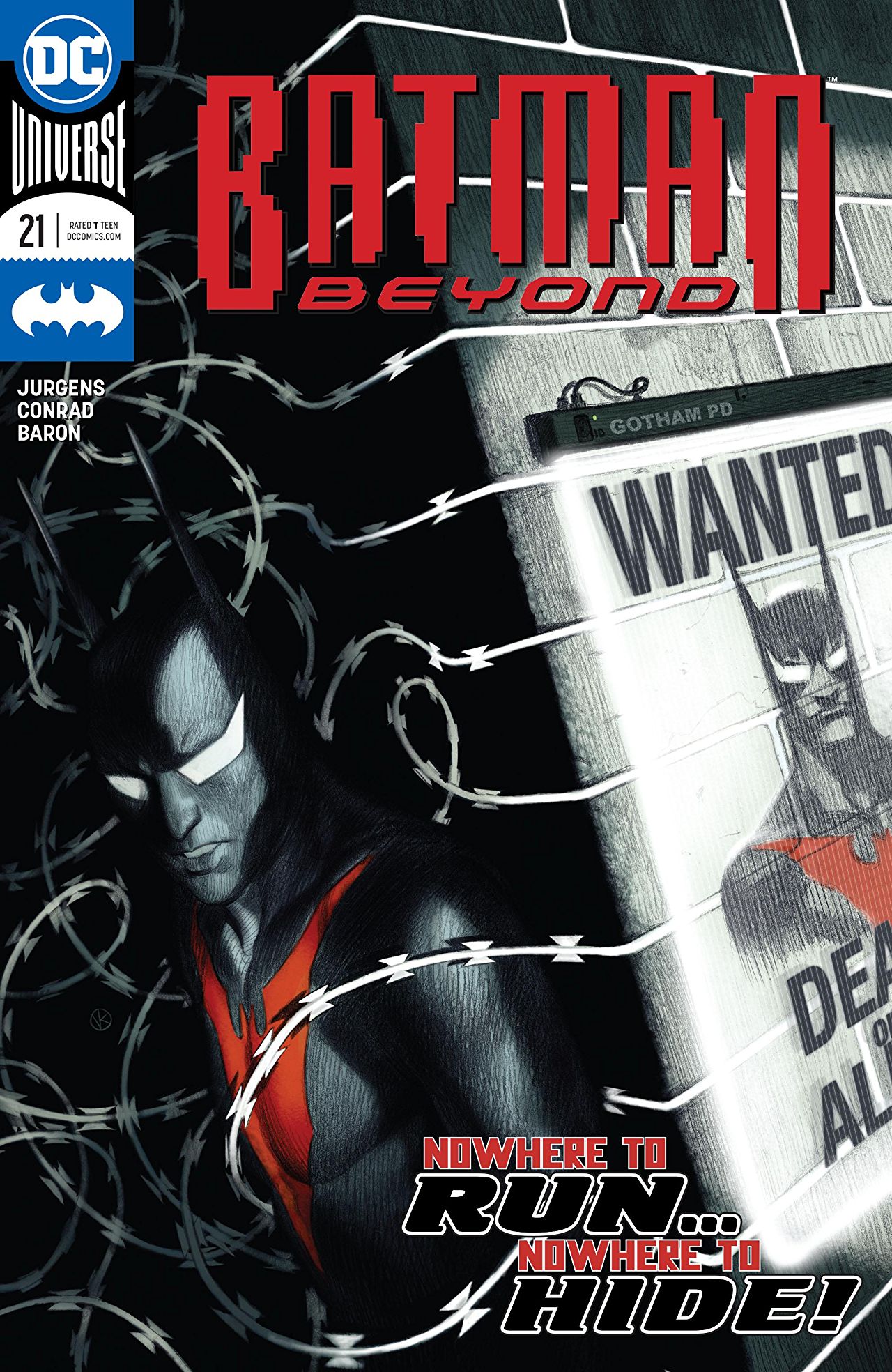 Overview: Terry begins to realize that there might be something more sinister behind Gotham’s irrational fear of Batman.

Synopsis (spoilers ahead): Adalyn wakes up in her apartment on the floor and remembers seeing a Bat monster the previous night. Her smart home AI informs her that she was alone the whole night. Meanwhile, Batman breaks up a street heist perpetrated by a bunch of Jokerz. He tries asking them about the member of the gang who shot up the police HQ but they deny having anything to do with it. The Jokerz exhibit a similar level of desperate fear and call Batman a monster. Turns out the Jokerz have been stealing advanced tech gear and have upgraded to grenades.

Back at Wayne Manor, Matt is having a discussion with Bruce and the AI version of Alfred about Terry’s decree that Matt cannot be Robin. Matt seems to be speaking strangely and exhibits anger towards Batman but not Terry. Bruce explains to Matt that he’s in this situation because he didn’t follow orders but Bruce also appears to notice that Matt is talking strangely.

Melanie pays a visit to Jack Ryder who happens to be her sponsor in the criminal rehab program. Melanie updates him on her life when Adalyn shows up and asks to speak to Jack before they go to work. Adalyn panics when Batman’s shadow passes over her as he flies overhead. She again refers to him as a monster. It so happens that Terry is on his way to visit Dana and talk to her about the voice mail she left him. Dana panics and doesn’t seem to know that it’s Terry until he removes the mask. Dana reveals that she saw Terry kissing Melanie. Dana then tries to call the police because it appears to her that Terry has become some kind of bat demon. Terry leaves but notes that it isn’t a coincidence that so many unrelated people are referring to him as a monster.

As he’s flying away, he notices a large mob vandalizing a memorial to the original Batman. Batman saves a kid who is in danger, but the people seem too crazed to notice and interpret Batman as the threat. A group of Jokerz open fire on Batman and are surprisingly joined by average citizens holding baseball bats and Molotov cocktails. Batman tries to fight out from under them without hurting anyone but there are too many people. Commissioner Gordon and the GCPD show up, but instead of subduing the mob, they tell the mob to clear the line of fire and they fire on Batman.

Analysis: There’s not too much that happens in this issue as it lays the foundation for the eventual reveal of the main villain. That being said, this issue is a really fun read. It doesn’t try to do too much, but it does a really good job advancing the story and setting the stage for what’s to come. One of the things I really like about it is that it isn’t obvious who the villain is. Given the nature of the peculiar behavior floating around Neo-Gotham, I would guess Scarecrow or Spellbinder is involved somehow. But I still can’t be sure about that because there aren’t any hints tipping the identity of whoever is behind this. Too many comic books tip their hand from the very first issue so I was really happy to see a story play things a little more close to the chest.

One of the moments that’s bound to fly under the radar in this book is the quick conversation between Melanie and Jack. It’s nice to see someone in Gotham going through a criminal rehab program. I think it’s too often that Arkham and Blackgate are used as revolving doors for criminals in Batman stories. It’s strongly hinted that Jack Ryder has gone through the program himself and come out rehabilitated so it’s only fitting that he sponsor Melanie and be a guide to her on her path to redemption. There’s a lot of potential to Melanie’s story arc here.

There’s a new art team on this book and they do an excellent job presenting the story. I thought the giant Batman memorial statue was a very nice touch. It makes sense that the city would have a monument to the original Batman but this is the first time I can recall seeing it in a Batman Beyond comic. Baron’s colors in this issue really standout as being vibrant but not overly complex so as to become distracting. The only quibble I have with the colors is that the story appears to take place right before the crack of dawn but the sky seems to be getting darker as we progress through the issue. It’s all beautifully done, but it’s just something random that stood out to me. Another thing that stood out is Bruce no longer needs a chair to get around now. He’s needed a chair to get around for the entire time I’ve covered the series, so I wonder what changed. Perhaps he simply recovered from old injuries. In any case, I hope it is explained even if it is just one line of dialogue.

Final Thoughts: A simple but visually appealing and fun read that keeps an interesting story moving along smoothly.