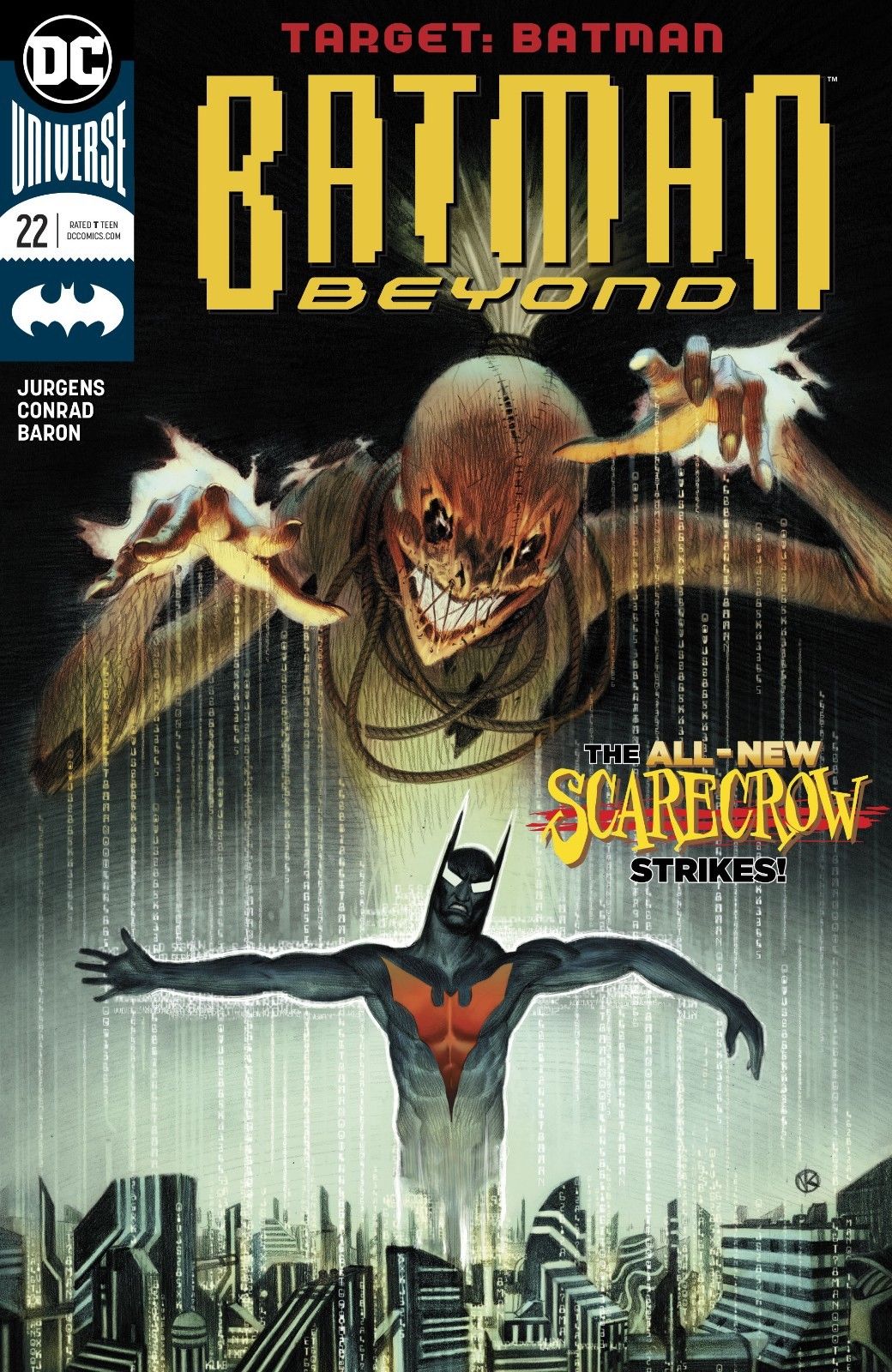 Overview: The new Robin comes to Batman’s aid, a reformed villain asks for help and the mysterious mastermind is revealed.

Synopsis (spoilers ahead): A distressed Jack Ryder bursts into his workplace demanding to see Adalyn. She’s not at work and Jack leaves despite the news station needing him on air. Down on the street, the riot continues. Batman is trying desperately to escape without harming anyone. He’s being attacked by Jokerz, civilians, police and Barbara Gordon herself.

Back at the Batcave, Matt and Bruce watch helplessly as Batman soldiers on. Bruce reveals that he has made a new suit for Matt that gives him defensive and offensive capabilities equal to the Batsuit. Matt suits up and gets to take the Batmobile to go save Terry.

Jack is at Adalyn’s apartment looking for her. He uses a voice scrambler to get in and ask her home AI questions about what happened to her last night. He discovers a room full of papers with the words “The Bat” scribbled on all of them. He says that there is only one man who knows how to explain this and that is Wayne.

Batman continues to struggle against the mob when a mysterious figure in the shadows appears and convinces a child to use a cannon to shoot at Batman. Batman manages to evade the shots and make sure no one is hit. Before the girl can shoot again, Robin uses a grappling hook to take the gun from her. Batman is happy that Robin is there and instructs him to adopt a defensive posture only. Meanwhile, the figure in the shadows continues to go unnoticed and says that elevating the levels of fear will turn the mob loose.

In the Batcave, Bruce wheels around suddenly in his chair and throws a Batarang at an intruder. It turns out Jack knows Bruce was Batman and has come to ask for his help with Adalyn. Bruce goes back through his case files to find any connection to her and finds an incident where he encountered her father. He pulls up the belt cam footage and it reveals that he once crippled Adalyn’s father in front of her when she was just a young girl.

Back on the streets of Gotham, Batman and Robin fight desperately to push back wave after wave of people. The figure in the shadows is revealed to be the Scarecrow.

Analysis: This is going to be a relatively short analysis because there really isn’t a lot that happens in this issue. While not much happens, the parts of the story involving Batman seem really drawn out. He has been trying to escape from this mob since the middle of the last issue and he still hasn’t managed it by the end of this one. I get that he is trying not to hurt anyone, but it’s really absurd how long this is taking. Somehow while Batman is trying to battle this mob of people, Jack is doing a number of time-consuming things. That’s really my main criticism of this story. These events are portrayed as happening concurrently, but there is almost no feasible way for the timelines to match up. Batman must have been fighting for hours if Jack had time to drive to work, drive to Adalyn’s apartment, search Adalyn’s apartment, and finally drive to Wayne Manor and wait for Bruce to search through his case files to unearth a connection. I’m also not sure why Jack has lost track of Adalyn because she had just come to hitch a ride to work with him in the past issue. They were standing outside his apartment about to go to work together because Adalyn wanted to talk. I’m not sure how or why she has suddenly gone missing from that point. Also, what happened to Melanie?

The big moments in this issue are the reveal of the Scarecrow and the fact that Jack Ryder knows the original Batman is Bruce Wayne. While I’m not averse to Jack knowing Bruce’s alter ego after he has reformed and Bruce has retired, I do have a problem with Jack being able to waltz right into the Batcave after years of not speaking to Bruce. It appears that Wayne Manor and the Batcave security need an overhaul. There is an interesting element here where Bruce is forced to confront the impact that his war on crime has had on people who were not directly in his crosshairs. In this case, a young Adalyn watched as her father was crippled by Batman. Yes, her father was a gang member who was trafficking weapons, but seeing her father get beaten like that has to have a residual effect on a child. The impact of this moment isn’t explored further in this issue, but it potentially will be in the next one.

The cover teases an “all new Scarecrow” which implies that this isn’t Johnathan Crane dusting off his old costume. Conventional wisdom at this point would suggest that Adalyn is being built up to be revealed as the new Scarecrow, but I’m hopeful for a twist. Given how often comic book covers misdirect readers regarding the contents inside, I don’t think it’s beyond the realm of possibility that we see something different happen.

Just like the last issue, the art here is quite good. Robin’s costume design is done really well and doesn’t clash aesthetically with the Batman Beyond suit. I think the green parts on the arms and legs could be a little bigger to break up the black, but otherwise, it’s perfect. The Scarecrow design is similar to the one most readers are familiar with but a key difference is the straw behind the mask to resemble long hair. Some readers will also enjoy Conrad’s rendering of the original Batman in his classic suit. Baron uses the blue and grey color scheme to give it even more of a classic feel.

Final Thoughts: An unevenly paced issue with continuity errors that continues to build the suspense for the conclusion.