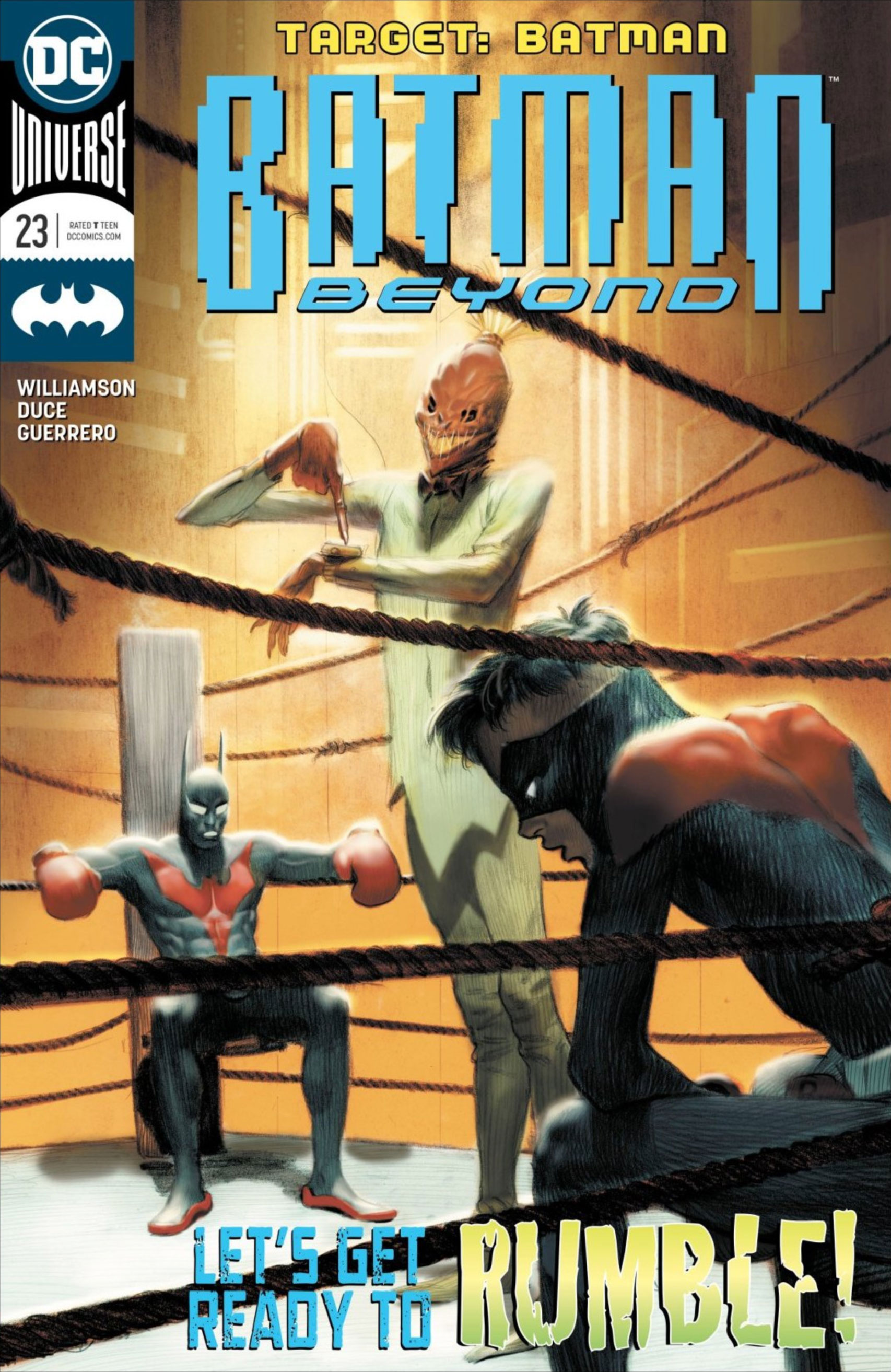 Overview: Batman is joined by his brother Matt, the new Robin, as he faces off against the Scarecrow, whose identity is revealed as the city continues to turn against Batman.

Synopsis (spoilers ahead): The issue opens with a twenty-one seconds ago flashback of the new Robin, Matt McGinnis, piloting the Batmobile as Bruce Wayne gives him instructions on how to handle the crowd attacking his brother.  The story then cuts to the present with Batman and Robin surrounded by a crowd of citizens, forced into attacking by the influence of the new Scarecrow.   Batman orders Robin to leave, as Robin tells him that there is a plan.

Back in the Batcave, Bruce and news anchor and former Creeper Jack Ryder talk as Bruce works to figure out how this new Scarecrow is making its citizens fear Batman.  Scarecrow orders the mob to continue their attack, and as they swarm them, Robin releases gas pellets that put the crowd safely to sleep.  The Scarecrow tosses a little girl over a balcony, forcing Batman to dive after her, and the Scarecrow escapes.  Batman and Robin return to the cave as Jack Ryder leaves, off to go find his friend, Adalyn Stern, who in the last issue was revealed to have witnessed her father being brutally beaten by Batman.

At the News 52 building, the Scarecrow fiddles with a machine as the citizens of Gotham continue to riot, all except Melanie Walker who is curiously unaffected.  Jack finds Adalyn cowering in the newsroom and tries to calm her as Batman and Robin fly through downtown Gotham looking for air samples to try to find out how Scarecrow is influencing the city.  They notice that the advertising screens on the building are filled with a strange static as the Batmobile is suddenly shot down by a fear-influenced Barbara Gordon.  At the Batcave, Bruce begins to feel there is someone in his head while in Gotham, Robin starts to call Batman a monster and attacks him in midair.  The issue ends with Jack Ryder discovering that Adalyn is the Scarecrow as Robin disables Batman’s flight suit and Batman begins to fall out of the sky.

Analysis: I think part of the challenge of a concept like Batman Beyond is that there’s always a danger that it will come off feeling like the cover band version of the original and I have always preferred it when the book comes up with new villains rather than giving us the “Batman Beyond” version of Batman’s rogue’s gallery.  That being said, I like this new version of Scarecrow.  So much of the focus of Batman stories is in dealing with Bruce’s childhood trauma and how this drives him to make sure what happened to him doesn’t happen to anyone else.  There’s something very interesting about having Batman, created to inspire fear in his enemies, be the unwitting cause of someone else’s childhood trauma, and I think that Adalyn Stern has the makings of a great Batman villain.

While I like the concept of this new villain, I do feel that this story arc has stumbled in its execution.  After the reveal in the last issue that Adalyn witnessed her father being crippled by Batman, to having Scarecrow work on her machine at the new building, the story telegraphs pretty early on who the new Scarecrow is going to turn out to be, and the reveal in this issue is anticlimactic.  I think that the story would have been better served to hold off on Adalyn’s origin until she’s revealed as the Scarecrow or at least throw in some alternate suspects to throw the reader off of the big reveal, because as it stands, really, who else was it going to turn out to be?

I think that this introduction of this Robin continues to be well handled.  I have to hand it to writer Dan Jurgens for using Scarecrow as the villain since Scarecrow was also the big bad in Tim Drake’s first appearance in his own Robin Suit (1990’s Batman # 457, go read it.  It’s great).

Will Conrad does a decent job with the art.  There are a lot of crowd scenes in this book which are always a lot of work for an artist and I thought they were well executed.  As a note for the art on this series in general, I do wish the artists on this book would change the current design of Batman’s eyes.  As it stands they seem too Spider-man-esque and I find myself wondering why Batman always looks so surprised.

Final Thoughts: Despite some structural issues with how this book was put together, an interesting take on a classic Bat-villain had me enjoy this issue quite a bit.