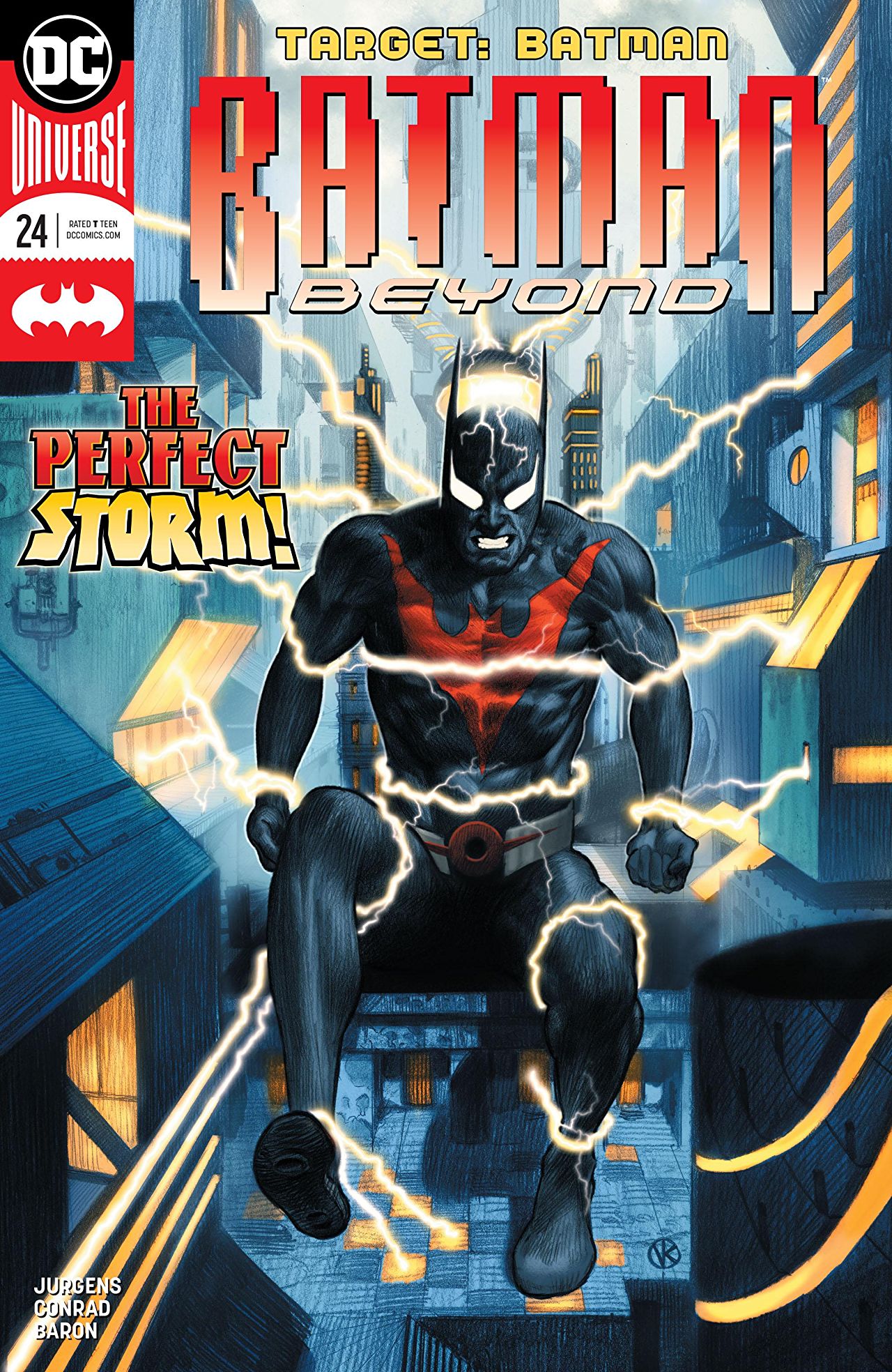 Synopsis (spoilers ahead): As Batman falls through the air after being shot down by Commissioner Gordon, Bruce tries to get Terry to wake up. Bruce tries to get Robin to rescue his older brother but it is apparent that he is under the effects of the Scarecrow’s fear toxin as he tells Bruce that he must kill the demon, Batman. The whole city beneath Terry is crying out for his death as they believe him to be a monster.

Before Batman slams into the street, he is rescued by Melanie Walker, AKA Ten, dressed as her alter ego and flying on top of her trademark playing card. She agrees to help Batman and soon finds herself teaming up with him to subdue Robin. Matt ignores Bruce’s orders to see through the fear toxin. Meanwhile, Bruce attempts to deduce the solution to countering the fear toxin now that he realizes Melanie is immune to it.

Across town, Jack Ryder attempts to reason with Adalyn who has revealed herself to be the Scarecrow. Jack tries to convince her that fear is not the way as he once fell to that as well alluding to his time as The Creeper. She does not listen and tries to use the toxin on him. Jack is able to patch in Bruce to show that, it is indeed, specialized tech being used to spread fears toxin.

Bruce lets Terry know the toxin’s carrier method and begins to try and jam it. As Batman and Ten lose time fighting Robin, Terry unmasks himself so that Matt can see and hear past the hallucinations. He is able to gain control of himself just as Bruce jams the fear toxin’s signal which stops the mass hysteria and the police from bombing the city.

The group heads to take down the Scarecrow herself but Ryder begins to fight Terry. He reveals that he is not under the influence of the toxin but wanting to keep Batman out of Adalyn’s life. He explains that she witnessed Batman beating up her father and was emotionally scarred by it.

After Adalyn is sent to Arkham, the group meets in Wayne Manor to discuss Terry’s identity revealed to Ten, a known criminal. Melanie states that she will help and Jack vouches for Melanie’s rehab. Ryder then criticizes Bruce’s mission as the fear he instilled as Batman went beyond just criminals.

The issue ends with Adalyn muttering to herself in her room at Arkham about how bad Batman is. A voice in a neighboring cell announces that he will do something about the Batman.

Analysis: Having not followed the last few arcs of Batman Beyond, I thought this was a pretty good conclusion to a Scarecrow story. It dealt with a darker side to Batman’s mission and its potential effects beyond its primary goal.

We get to see a very damaged villain in this issue where the primary cause for her psychosis can be traced back to Batman. Some of the better stories of Batman shine a light on to his mission and make you question if what he does is for the betterment of all. Although we know he saves Gotham City time and again, it can’t be overlooked that his crusade to make criminals afraid of him can have collateral damage. Jurgens does a good job crafting a story that makes you know Batman is still a hero but we can still feel sympathy for the villain. Adalyn just had the misfortune of having a criminal father and being a witness to his brutal arrest at the hands of Batman. She was too young to understand what was happening so her deep-set fear of Batman is justifiable in her eyes.

The reveal of Terry’s identity in front of Melanie will make for a new, interesting dynamic as the Batman Beyond Team gets a little bigger. Terry seems to be getting more of a “Bat-Family” of the future so it will be nice to see where Jurgens takes this.

The artwork was good and Will Conrad is delivering a look to these characters that I am looking forward to seeing more of. I liked how he depicted “dual vision” panels where we see Jack Ryder’s The Creeper look looming over him as well as the monster versions of Batman and Ten from Robin’s view.

Final Thoughts: Overall, I am pleased with the direction it’s going and the bigger themes that Jurgens seems to be wanting to tackle in regards to Batman’s mission.