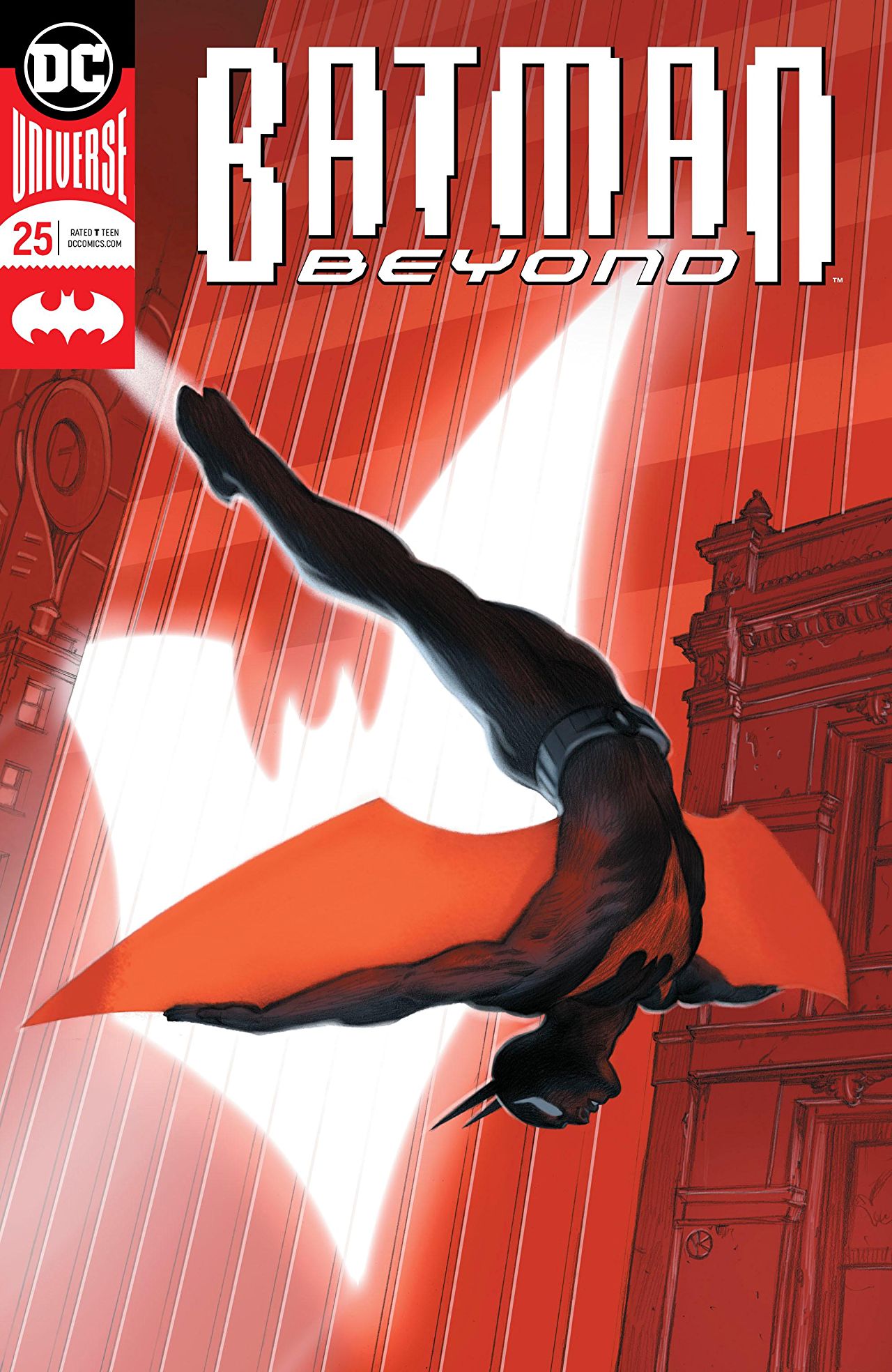 Overview: Just as the new Batman and Robin begin to learn their new dynamic, an old villain of Bruce’s returns to bring down his legacy…beginning with Barbara Gordon.

Synopsis (spoilers ahead): The issue opens on a train heading to Neo-Gotham. Dick Grayson, now mayor of Bludhaven, discusses with his daughter how much the city has changed over the decades since he used to be Robin. He talks about the dangers that seemed only to be adventures at the time. All of Gotham’s advancements, according to Dick, can be attributed to the actions of Bruce Wayne.

Meanwhile, Terry and Matt continue to build their relationship as crime-fighting partners as well as brothers. Matt is certainly juvenile and demonstrates this at a crime scene where Commissioner Gordon shows the duo a grisly murder of a number of Jokerz. She ends their meet up with asking about the ceremony that afternoon.

It is revealed the ceremony is for the grand opening of the Wayne Family Center which had been a passion project of Bruce’s for years to help the families of Gotham in the way that his parents would have wanted. The site of the building is even above Crime Alley to honor their deaths.

While Bruce opens the ceremony, a shadowed figure hijacks a high-speed train after murdering the conductor and runs in straight into the building. Luckily, Terry and Matt are able to suit up and stop the train from destroying the family center. However, they are unable to stop it from damaging multiple other buildings.

Hearing the nearby explosion while investigating even more Jokerz killings Barbara rushes to her office to call the White House for support. The issue ends with Barbara walking into her office only to find the apparent Joker from her crime-fighting days seated in her chair and announcing that he is not only alive but that Bruce knew all along.

Analysis: I find myself on the fence regarding the beginning of this arc. While bringing the Joker back in this Neo-Gotham is certainly a compelling plot point, it definitely feels like retreading of an already completed story. It probably does not help that I watched Batman Beyond: Return of the Joker about a month ago. With that story fresh in mind, the entire issue felt like a poor retelling of the iconic animated film.

As far as positives go for this issue, I have to hope that the potential of this story to do something different than the animated film certainly gives me hope that the creative team will take an interesting concept and expand on that seed of an idea. With decades of Batman stories, there are bound to be redundancies in plot line and so forth. However, with the last story told eighteen years ago and its immense popularity among fans, this all feels a little too on the nose and a retread. Again, the potential for surprises is great and I am excited to see what changes they will make from the original story. The Joker teased at the end had a different look about him which could have been due to the artwork but maybe could be alluding to some other plot point regarding the Joker’s physique and age.

The redundancies in the story and the retelling of the Batman Beyond origin from Dick Grayson’s perspective made me check the issue number to make sure they did not re-number this as a #1 to attract new readers. They even have Dick go as far as to hint at the Joker’s death and its calming of the criminal underworld for a time which also seemed to be an aspect of the animated movie thought told by Barbara Gordon in that story.

Final Thoughts: In the end, the issue was fine but its apparent retelling of an already established story makes me nervous for this arc. It is really going to depend on the creative team’s ability to go in a different and fresh direction to this return of the Joker.