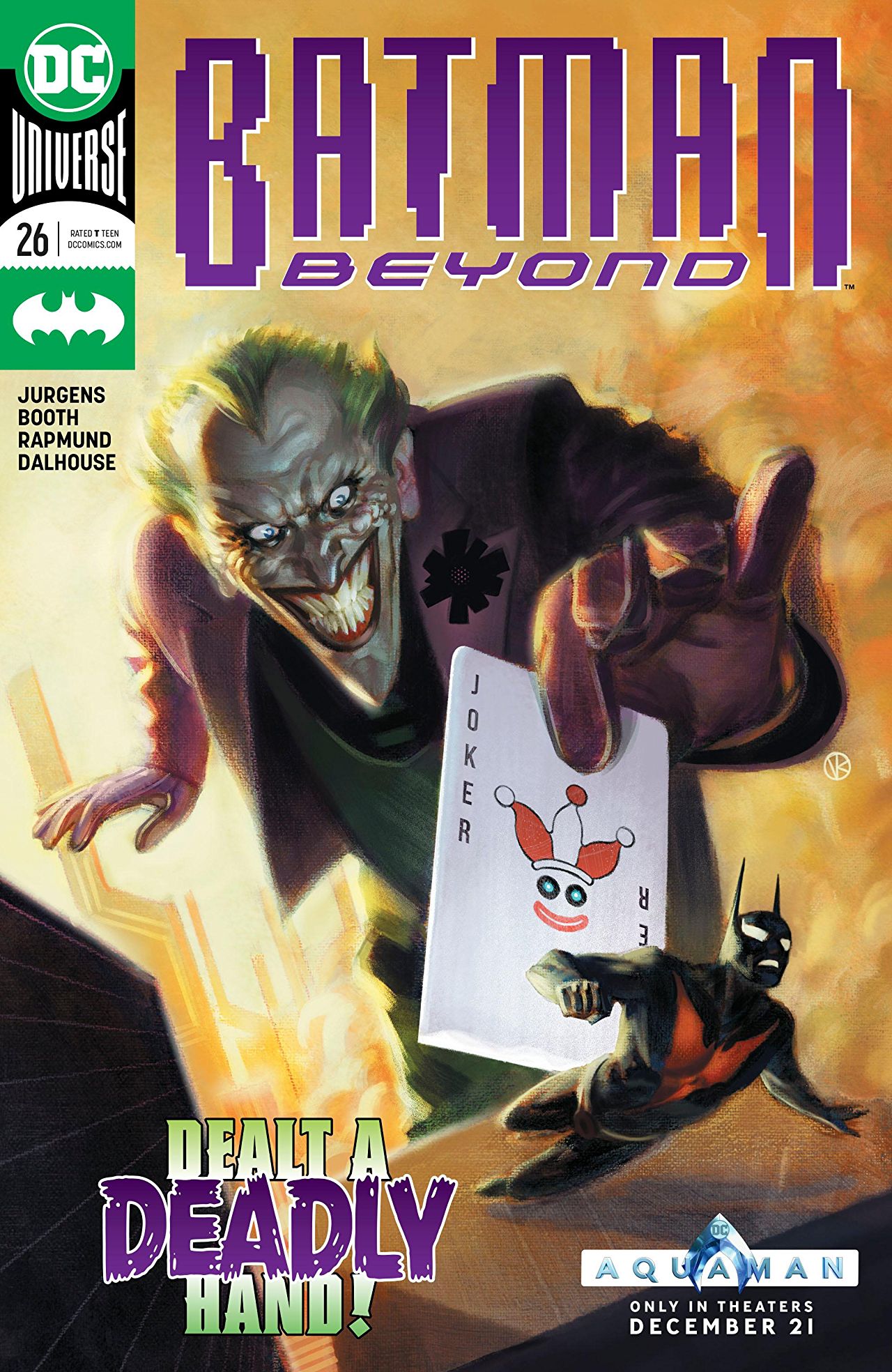 Overview: While Terry and Matt try to regroup following the bombing of the Wayne building and rescue as many people as possible, Barbara faces off with the Joker that the Bat-Family remembers all too well.

Synopsis (spoilers ahead): Picking up in Commissioner Gordon’s office, the issue begins with Barbara immediately trying to survive her reunion with the Joker. Utilizing her old skills and former training, she is able to stop the Joker and send him out her skyscraper’s window. The Joker is revealed to have survived as a floating car was waiting for him.

At the site of the train crash in Wayne Tower, Batman and Robin are attempting to save as many citizens as possible. They are able to rescue Bruce and Dick in a falling elevator. After the duo rushes off to find more survivors, Dick begins to read the riot act to Bruce regarding the induction of yet another young boy as Robin into the Bat-Family. Bruce makes an offhand comment about the suit being more protective and that Matt is very safe. Shortly after the heated debate between the two, the media arrives looking for a comment to which Bruce refuses but Dick decides to make a statement. Dick warns everyone of the new danger to Gotham as the train derailment was clearly the work of an intelligent, deranged person.

Watching from his floating car, the Joker gleefully realizes that there is a new Robin in Gotham. He flies away stating that the new costume makes for a good target.

Back at the crash site, Batman and Robin fly through Old Gotham to mixed reactions to the residents. Some feel that Batman does not spend enough time cleaning up the older streets on the lower levels. Terry admits to Matt that he could do more for the older parts of Gotham. The two go on to save more survivors.

The pair is met by Commissioner Gordon who tells them to assemble all members of the Bat-Family. She alerts them all to the resurgence of the “real” Joker. She also suspects that this Joker is the one behind the murders of the Jokerz seen throughout the city recently.

In an underground lair, the Joker discusses the sequel to his killing of the second Robin as he looks upon a displayed crowbar on the wall.

Analysis: Although we do not get any additional information regarding the origin of this Joker or how he came to be in this future, we still get an interesting issue showing off the funny and dark dialogue of the prince of crime. The back and forth between him and Barbara is definitely the standout for this issue. That being said, the actual scenes with Terry and Matt somewhat take a back seat to this huge development in Neo Gotham’s crime scene. Terry does have a line about paying more attention to old Gotham so hopefully, this is a plot thread that Jurgens intends to pick up and build on in later arcs.

My only slight problem with this issue was Dick’s argument with Bruce over involving a new Robin. It seems to be almost a trope now for someone to bring up Jason Todd as a reason to not have a Robin. If someone who knows Bruce is going to make this argument, they should at least stay true to history and bring up Damian’s death as well as the near-death moments of Tim Drake and Duke Thomas.

The artwork in this issue was an improvement over recent issues and I felt that Booth captured the two character designs much better in this issue. I really got a sense for Barbara Gordon’s physicality and her action presence in this issue. The line work on her face indicate an older Barbara but she still retains her skills as a crime fighter based on her fight with the Joker. Additionally, the Joker seems to be an updated, more modern look of Jim Lee’s traditional Joker.

Final Thoughts: Overall, a solid issue and I am definitely interested in reading more.