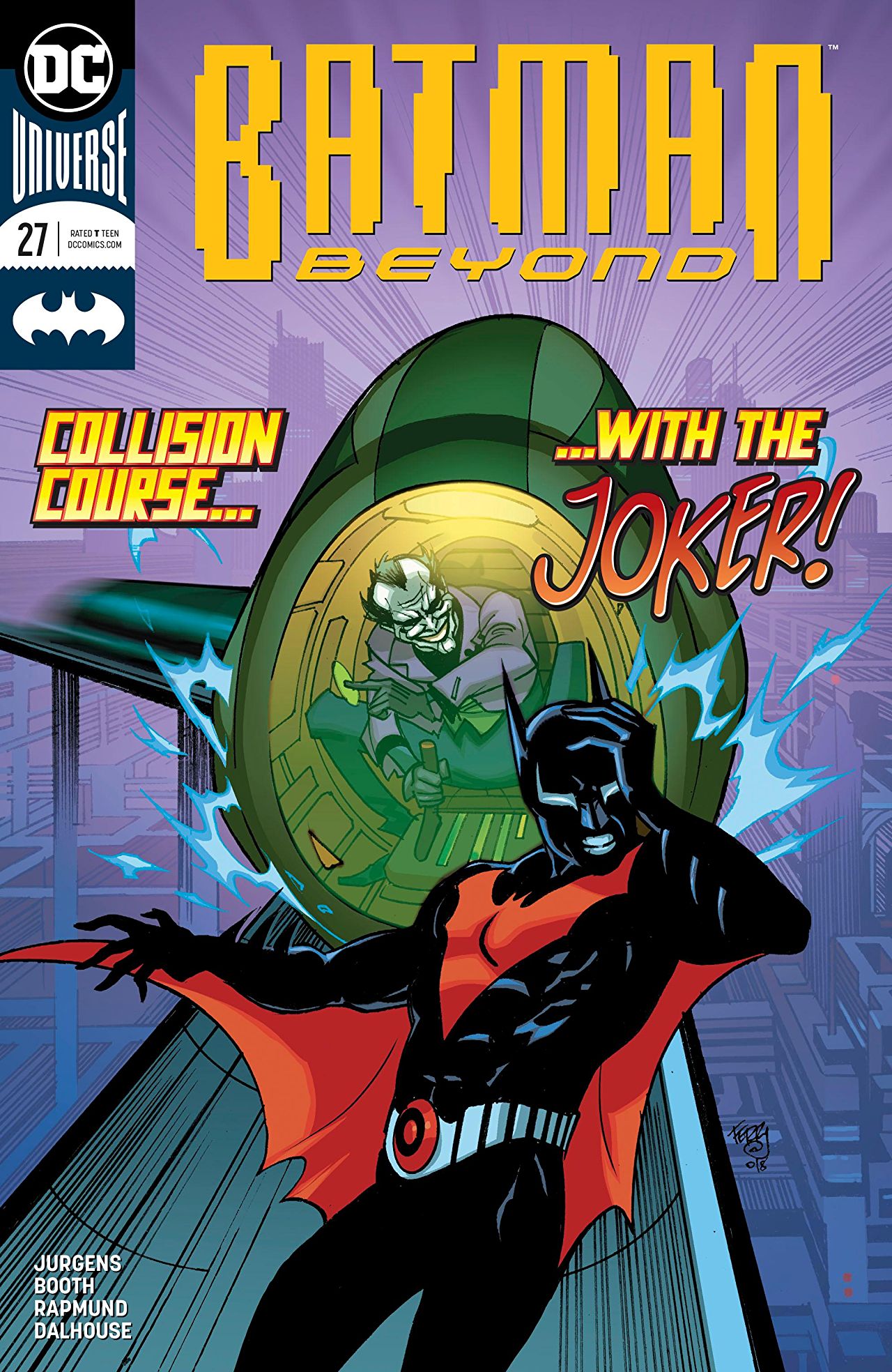 Overview: After searching tirelessly for the Joker following the destruction of the new Wayne Tower and killing thousands, Terry takes a moment to reconnect with Melanie & discuss their relationship. After another bombing, Terry and Matt are called to action and come face to face with the new cybernetic Joker “Beyond”.

Synopsis (spoilers ahead): After days of looking for the Joker, Batman feels as if he has searched the entire city. He decides to take a moment to spend time with Melanie. The pair mentions their history together and Melanie reaffirms her goal of continuing down the straight-and-narrow path away from her past criminal activities. The romantic moment is broken with the sudden arrival of Robin stating that another bombing has occurred by the hands of the Joker.

Prior to Robin’s arrival, a random joker known as “CC” walks into a joker novelty shop and reveals that he is on a suicide bomb mission for the Joker. To the horror of Bernie, the owner, the Joker via view screen tells him that he has to go because he has insulted the image of the Joker with his dressing up the Jokerz gang.

Following the explosion, the Joker is with his “Throwback” gang and discusses his disdain for this Neo Gotham and the Batman Beyond. He expresses his need and desire to bring back the dark and gritty Gotham he remembers even if it means evolving his methods. Using a knife, he murders one of his gang due to his boring name (John) and assures him he will be helpful in his grand plan.

Back in the present with Terry and Matt, they head across the city to investigate the suicide bombing. While in transit, the pair is attacked by the gang of Joker’s “throwbacks”. During the fight, Matt tries to pursue one of the gang into a building but is violently knocked back. Arriving at his side, Batman is shocked at the introduction of a cyborg hybrid mixed with the corpse of the joker “Johnny” announced by the Joker as Joker Beyond.

Analysis: While a less action-packed issue this month, it was nice to take a moment to explore Terry’s relationship with Melanie (even if just for a few panels). It could be very easy to leave out that plot line to make room for more action so the effort by the creative team here to bring us more quiet moments for the hero to balance his crime-fighting life with his personal life is much appreciated.

Jurgens explores an almost time-displaced Joker which brought up some disturbing tactics. I say “almost time-displaced” as we still have not gotten additional information as to how the Joker is present in Neo Gotham at the same age as we are used to seeing him. That would be my only minor nitpick in that it would be nice to get some hints dropped as to how he is there. Again, a very minor critique of an otherwise solid issue.

The artwork by Brett Booth really helped bring the Joker’s manic nature and behavior to the forefront and central focus of this issue. You can really feel his rage turn to gleeful joy in an instant even transitioning between two side by side panels. He also handled the quiet moments between Terry and Melanie very well in showing their intimacy and feelings for each other.

Final Thoughts: Overall, this issue was much more enjoyable compared to the last few of this arc. It captured the psychotic nature of the Joker brought into the future Gotham. Although not a lot of action nor any additional details into how the Joker is present in the future, it felt true to the characters ever-changing mood.