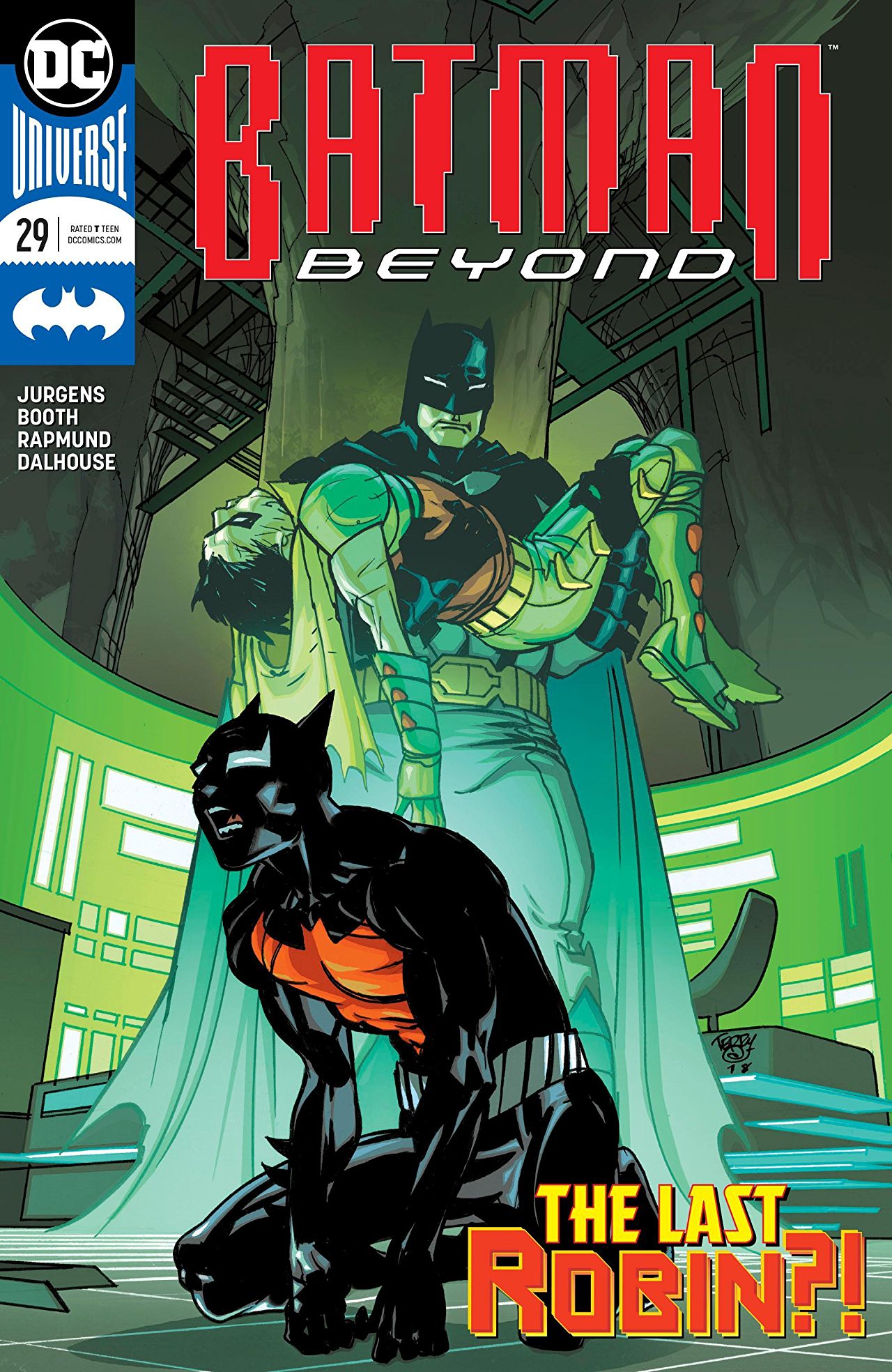 Overview: After kidnapping Robin, Joker sets the stage for a showdown with Bruce in the Batcave. Even in his old age, Bruce is able to hold his own until Joker has an apparent heart attack.

Synopsis (spoilers ahead): While popping a number of pills, the Joker is speaking with Robin detailing his murderous and violent exploits over the years. He tells Robin that he is going to broadcast himself killing him, but that he wants to know who the “Bruce” was that he was commutating with over the radio during the last fight.

Meanwhile, over the city, Terry and Dick continue to look for Robin but Bruce informs them that Matt’s tracking signal was short-circuited when the Robin suit was damaged. They eventually pick up the broadcast from the Joker as he stands over a casket. Batman and Dick are able to fight their way through a room of Jokerz, but discovers that the casket is empty.

The broadcast turns out to have been recorded and the Joker had used the distraction to gain access to the Batcave. He also reveals that Matt confessed and he now knows that Bruce was Batman. He tells him that he is not there to play his usual game, but solely there to kill Bruce. The pair begin to fight and despite Joker’s clear advantage physically, Bruce is able to gain the upper hand. Before the fight can come to a true end, the Joker begins to have heart trouble and eventually collapses, apparently dead from heart failure.

Analysis: Well, with another action-packed issue it’s clear we did not get the slowdown I was somewhat hoping for in this arc. Despite the indication that this is a “conclusion” of sorts, it certainly feels as if there is still more to come. With the good writing and excellent set pieces illustrated by the art team, I did thoroughly enjoy this issue even though the arc itself does not feel like it had the depth that it could have.

We do get to see Bruce and Joker square off, but in regards to the initial questions asked, either directly or indirectly, about the need for a Robin or the inclusion of young heroes in the dangerous mission of the Batman did not feel like it was resolved or even touched on. I hope that these topics get a little more flushed out during the next story of “Last Rites”, presumably a funeral and closing of the Joker’s story in Gotham.

However, with the ending of this issue being set up as a conclusion, I was really feeling the “Dark Knight Returns” vibes with Joker popping pills at the beginning of issue then collapsing at the end during the fight with Bruce. This felt like a set up for another arc, either the next one or in the future, for the Joker to be revealed to have faked his death much in the same way Bruce did against Superman in TDKR. If they don’t bring him back, I will actually be disappointed we did not get a backstory for how Joker seemingly stayed youthful over the years or what he had been up to at all.

Final Thoughts: Overall, the arc was just a big action set piece that, unfortunately, did not dig deeper into the relationship between Joker and Bruce nor did it establish any real connection between Terry and the Joker. I’m not saying the Joker had to kill Robin to create an impact on Terry but, compared to the Batman Beyond: Return of the Joker film, we see close to zero development between the current Batman and the original Joker. It makes me continue to appreciate that film that much more. Hopefully, the creative team has plans for this arc diving further into issues of the need for a Robin in a war on crime going forward.