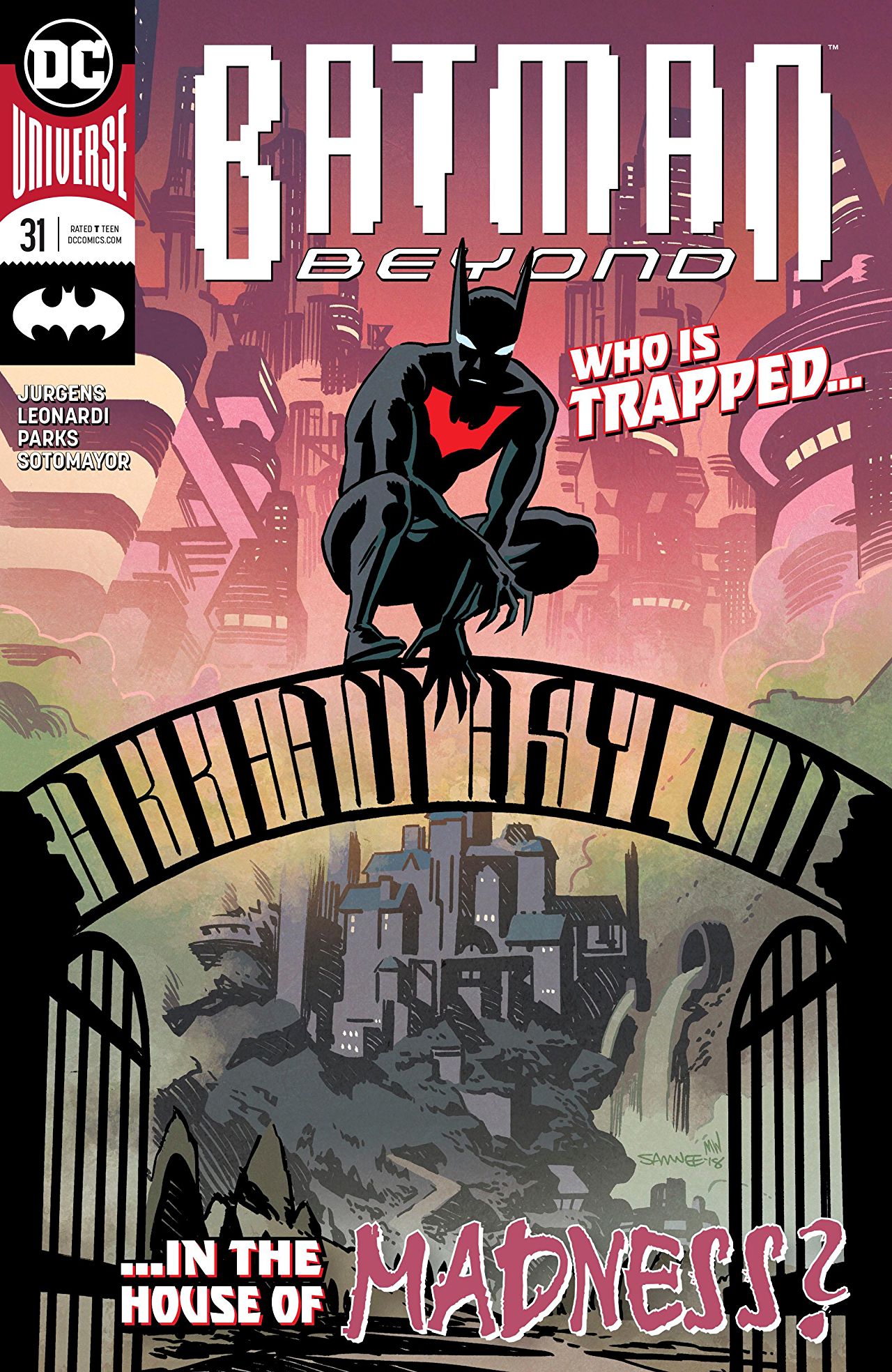 Overview: While Terry investigates a series of illegal tech advances, he comes face to face with a new villain. Bruce, meanwhile, appears to be different since his last visit to Arkham.

Synopsis (spoilers ahead): The issue opens with Bruce walking the halls of the newly reformed Arkham Asylum. He is being escorted by a doctor who has to remind Bruce that there are better practices in place to fully rehabilitate the patients of Arkham rather than hold them as a prisoner. Bruce is having to adjust to calling the residents of Arkham as patients and not inmates. During the tour, there is a quick blackout that causes Bruce to be alarmed. No sooner do the lights go out than they switch back on again only to reveal Bruce seemingly at the other end of the hallway. The doctors pay this no attention and finish the tour with Bruce. Getting back in his car, Bruce uncharacteristically pours himself an alcoholic drink.

Back at the manor, Terry chastises Matt about failing a test due to his Robin activities. Following the thread from previous Joker arc, Terry reminds Matt this is why Robin was “retired”. Bruce arrives home and the boys begin questioning his behavior but paying it little attention as they continue their investigation into the illegal advances in certain companies’ technology development. Bruce seemingly discovers the boys and his home are part of the Batman crusade. Once down in the Batcave, the boys put together a few clues so Terry decides to take the suit out and analyze further.

Once at the Powers building, Terry begins to fight a new villain, The Splitt, who is able to split himself into two separate people. Back at the cave, Bruce is no help to Matt or Terry. During the fight, the Splitt is able to gain the upper hand but eventually begins to weaken from the strain of staying apart. They trap Terry and the issue ends with Terry caught on a gravitational platform which threatens to crush him.

Analysis: After all the action from the previous arc, it was nice to have a slower mystery-based plot. There is a fight scene that feels like something out of the animated series and the overall mystery of Bruce (although it is most certainly not Bruce) are shaping this up to be an engaging story.

Jurgens gives us a relatively simple premise of a new villain in town that may be in league with big corporations and Terry has to stop him (them). With the Powers company being brought into the story, it is definitely possible we will get the evil Powers family to emerge. The power set of the new villain seems unique and I was left at the end of the issue very curious as to the villains origin and motivation. This has not always been the case with recent stories.

As a side plot, we see that Bruce has most likely been switched out with someone in Arkham. This may push Jurgens to kill off this other villain as they will know Bruce’s secret identity along with Terry and Matt but it certainly introduces tension and suspense which will keep me turning the page. We may get some interesting character development into Bruce being trapped in Arkham. Being borderline insane himself, Jurgens could develop some time with exploring Bruce’s psyche in this more modern Arkham which is centered around rehabilitation much more than the original facility.

Final Thoughts: Overall, I am intrigued by the storyline and mystery behind it. The artwork did not jump out to me as a standout but the story and dialogue balanced the issue out. It is a solid starting point without relying too heavily on the ending of the Joker/Harley cliffhanger from the previous arc.