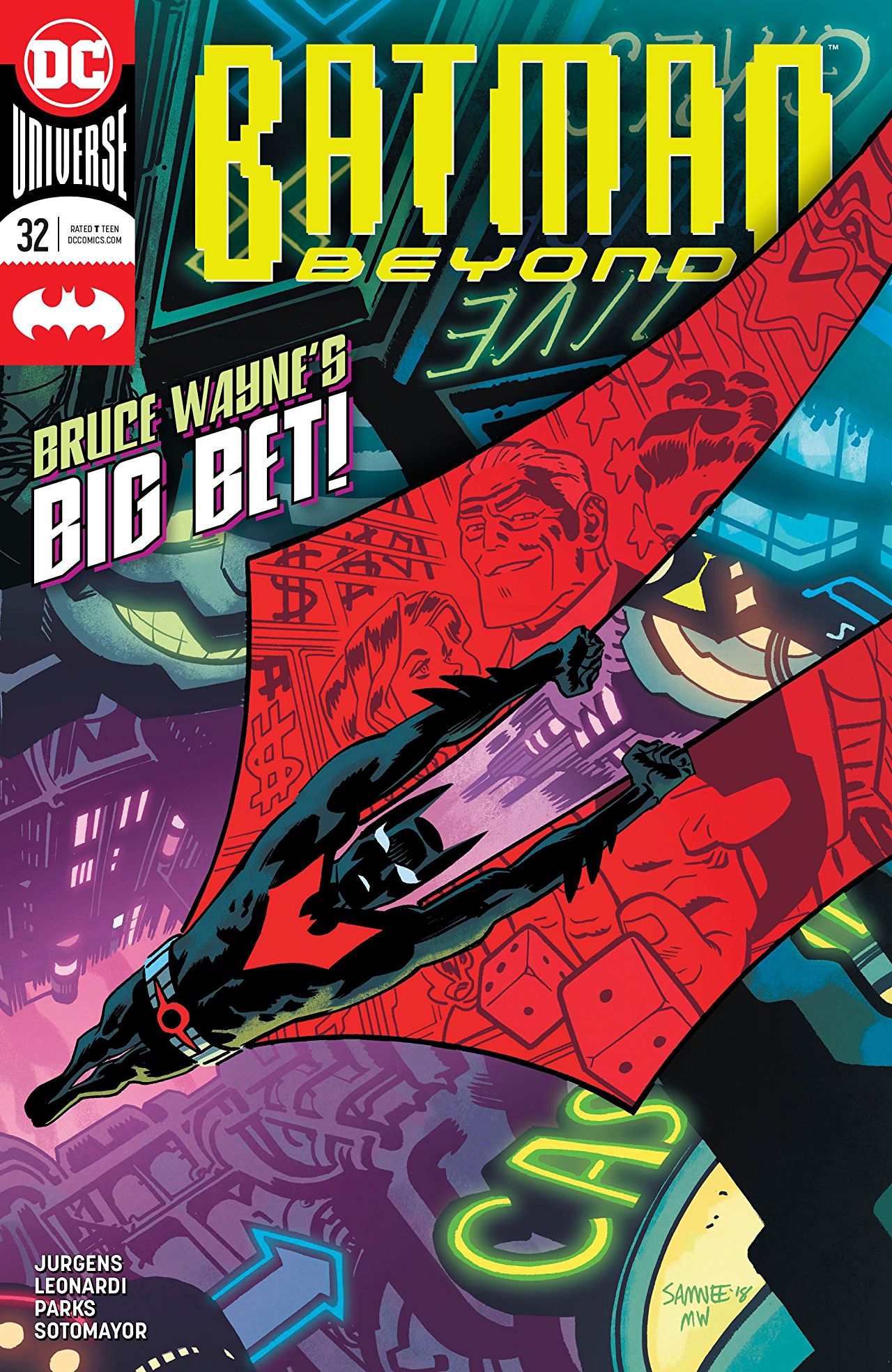 Synopsis (spoilers ahead): At a Powers black site, Terry is trapped by a gravity generator that is pulling his body thru the floor. He has only seconds to live.

Matt and Bruce monitor the situation from the Batcave. Bruce acts like there’s nothing they can do, but Matt uses the computer to access Power tech systems and shut down the generator, saving Terry.

As Terry heads back to the Batcave with his suit in need of repair, he says that Splitt is a teleporter that can divide into two, because they’re two people fused together, and he also believes that the two are brothers. Rather than stay and help investigate, Bruce says he’s going to bed and says Splitt can wait until tomorrow.

Splitt arrives at a boat and one half of Splitt, Adam, seems upset that the other half, Caden is alright with seemingly murdering Batman. Caden’s reasoning is that they have to do whatever they have to in order to survive. They are pleased they have acquired the Powers stabilization unit as shown in the last issue.

Back at the Batcave, Melanie offers to help Terry as the Batsuit is being repaired. Terry declines her offer. Terry says that Splitt is gathering specific items developed by Powers Tech black sites and that he’ll go check out the second site. Matt asks Alfred to wake Bruce, but Alfred says that he left almost two hours ago but won’t say where he went.

Bruce heads to a casino to gamble for the first time…..ever. Melanie uses the GPS to see that Bruce has gone to the casino. He gambles and acts like he could care less about Terry while making sexist remarks towards a woman.

Terry arrives at the second site, an old abandoned dry cleaner. He finds a heat source under the floor, but is attacked by Splitt as he tries to burn his way through the floor. Terry quickly discovers that Splitt is also a speedster, as Splitt hits him hundreds of times with only his armor keeping him alive.

At Arkham Asylum we see a bound, masked inmate saying he doesn’t belong there, and the guards call him “False Face”.

Analysis: I begin reviewing Batman Beyond on part two of this arc.  I’ve been reading the book previously though, and it’s just refreshing to me to be in something new.  A new villain. Not that the Joker arc was bad, but I really didn’t want or need another Joker/Robin story.  Even if it was decades in the future.

Splitt is an interesting villain.  I’ll admit that when I first saw him, I thought he was Deathstroke, decades in the future. Well, he’s not.  He appears to be a meta of some sort that is part speedster and can also teleport. He also is two people fused together that can separate into two, who are named Adam and Cain.  So, my first question is this. Is Splitt one person with a “split” personality that becomes the multiple personalities, or are they possibly twins that can fuse together? If it’s the latter, I think it could lead to a variety of interesting plot opportunities.  Adam and Cain seem to disagree on their methods, and if they should cross the line and murder to achieve their goals. This infers that there is a good twin and a bad one. Being an identical twin myself, I’ve been asked countless times – “who’s the good one?” While incredibly insulting, it’s also absurd to think or joke that if there’s a set of twins, that one is good and the other isn’t.  I think Jurgen’s will go this route and have the two brothers battle it out to see which one will be the dominant one.

Secondly, what are they trying to do with the tech that they are stealing?  I’m assuming they need it to sustain themselves as they seem too tired if they are “split” for too long.

Thirdly, why is Bruce acting so strangely?  He goes to sleep instead of investigating. He goes to a casino to gamble for the first time ever while Terry is engaging Splitt.  He also uses a very derogatory comment towards women while at the casino. Essentially, everything he says or does is the complete opposite of what Bruce would normally do. Factor in that the inmate at Arkham that says he doesn’t belong there, and the guards calling him “False Face” leads me to believe that an inmate captured Bruce while he was at Arkham in the last issue and is now impersonating him. But why?

These aren’t necessarily groundbreaking methods of comic storytelling at all, but it actually works to an extent.  The Splitt part of the story I find interesting, and I’m interested in who is portraying themselves as Bruce, but I don’t think there’s a doubt in anyone’s mind that the real Bruce is the one in Arkham.

The art by Rick Leonardi is very solid. I’m not very familiar with his work, but look forward to seeing more of his stuff.

Final Thoughts: A solid issue. We continue the story while adding to the intrigue of who Splitt is, and why Bruce is acting so strangely.