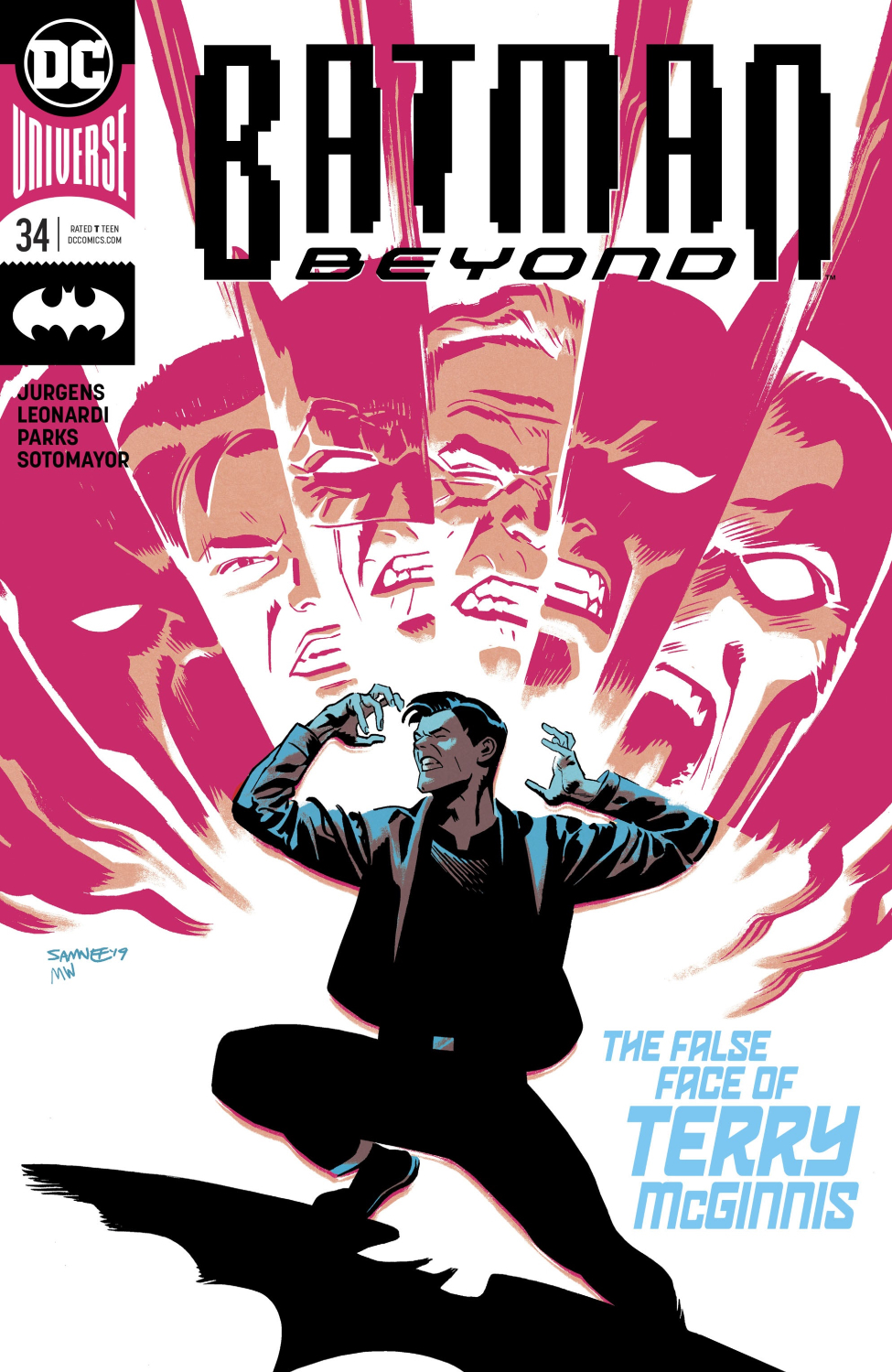 Overview: As Splitt continues to steal items, he’s given a strange proposition by Terry. Or is it Terry?

Synopsis (spoilers ahead): As a ship flies overhead, it’s stabilizers are offline and it’s going down spewing smoke. Terry flies by, calling them morons for getting in his way, and better luck next time. Terry is actually the villain “false face” and damaged the ship for getting in his way.

Terry then breaks up a robbery/kidnapping in progress, gets overly violent and throws one of the kidnappers off a building. He flies down and catches him remembering that he can’t kill him because he’s a “good guy”. Terry drops the kidnapper in an alley where the “real” Terry is stumbling around not knowing who he is.

At Wayne Manor, Bruce is back with his memory intact and he explains to Matt and Melanie how and when False Face attacked him. Terry surprising flies right in the front door near Bruce, Matt, and Melanie. Bruce admonishes him for not entering through the cave, and that he could have been seen. Melanie reads a report of Batman killing the kidnapper, and Bruce tells Matt that if true he’ll never wear the suit again.

Matt and Melanie then fill Bruce in on who Splitt is and that he’s been robbing Powers Research sites. Terry asks Matt to guide him to the last research site that Splitt hasn’t robbed yet.

Terry (False Face) is led to the waterfront where he sees Splitt attempting to download something. Matt suggests he use his gas pellets to disable Splitt. Terry comes face to face with Splitt and throws the pellets but Matt says they were actually explosives. Bruce wonders what Terry is doing since he almost killed Splitt. As Terry fights, Splitt’s Caden again wants to be more violent than Adam. Terry swings his wings/cape and cuts both Adam and Caden badly. Caden really wants to kill Terry now, but Terry says that he wants Splitt to join him, and they’d all get everything they want.

Bruce realizes that Terry isn’t the real Terry and he should have realized it earlier.

After being knocked out by the hit to the face by the kidnapper with the gun, Terry wakes up to find the diner worker dead and the gun in his hand, with the police on their way.

Analysis: So, we’re at the end of the fourth issue of this arc and I’m kind of at a loss for words. After four issues what do we actually know about the new villain Splitt?  We know he’s a meta human that can split into “two” and a speedster. We also know that Caden is more violent than his brother Adam and that they’re stealing parts from Powers research facilities around town. It’s not as if we know absolutely nothing about them, but after four issues we don’t know what Splitt is stealing the parts for and what the general reason behind their villainy is. Matt said probably to “make something”, but hat’s really going out on a limb.

Jurgens probably could have written a whole arc featuring either Splitt or False Face. Having the two together in the same arc isn’t really working. The Splitt part of this arc is just not up to par.

With that being said, we really don’t know much about False Face either, other than he can take identities while leaving his victims with no memory of who they are. We don’t know his real identity or name and don’t know what his goals are either. Other than he wants to team up with Splitt for some reason.

Maybe I’m being too impatient. But when you look at the sales for the series, it seems a shift should have happened at this point. Maybe I am just expecting too much.

The art in the book has been the bright spot for me despite a few inconsistencies with the size of the Bat symbol.

This series has such good potential. I’m holding out hope that when Batman Beyond is used by Brian Michael Bendis in the upcoming Millennium mini-event that it gives either this title or a new one featuring Terry the shot in the arm it desperately needs.

Final Thoughts: After four issues of this story, the focus on two villains at the same time has taken its toll on the overall arc. Hopefully, something changes before the arc ends.