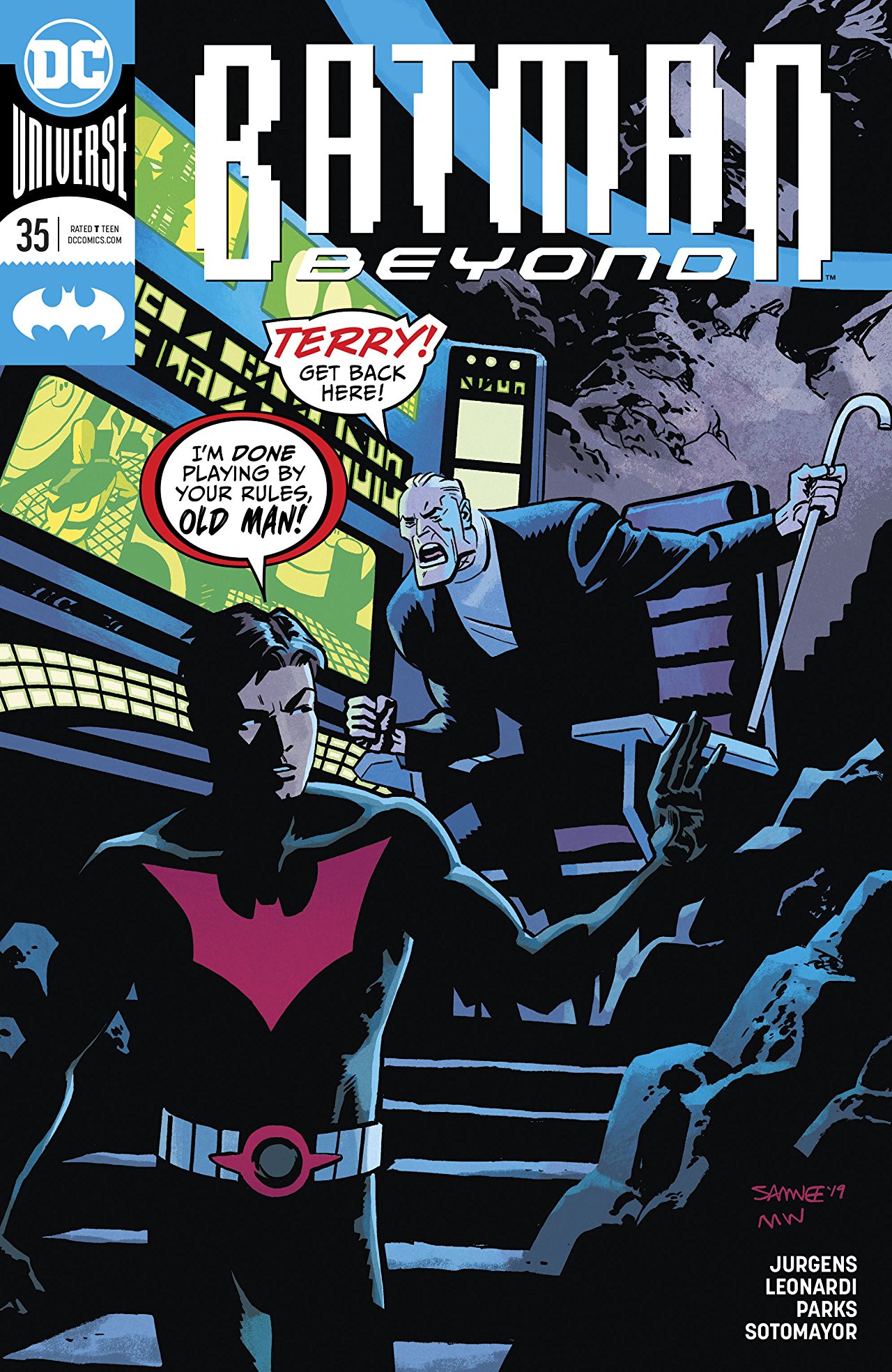 Synopsis (spoilers ahead): Decades from now, Bruce Wayne and Matt McGinnis look on from the monitors in the Batcave as ‘Batman’ (revealed in the last issue to be False Face having stolen Terry’s identity), having encountered Splitt, propositions them into joining forces with him. The brothers, believing the offer to be a setup, attempt to take down the Bat who, though still winging his way with the suit’s tech, handily overpowers them and manages to convince the two that he’s not pulling their leg; he’s got a long con that’ll benefit them all.

Though Caden still doesn’t trust Batman, Adam reveals that they’ve been after equipment that’ll permanently separate the two, because their shared powers are killing them. We are then given the villains’ origin story:

The boys’ mother had died giving birth to her son (yes, singular), Caden. Their father not only struggled to make ends meet financially, but also to raise his son, who was abnormally demanding. This would only be explained years later, when Adam literally stepped out of Caden’s shadow, revealing the boy (now a pair) to be a metahuman with not only the ability to merge together, but also with superspeed. The boys had no control over their powers, however, and their father turned them over to Powers Tech to be exploited by Derek Powers and a reluctant Warren McGinnis, where they would be kept until Derek Powers disappeared and they were able to make their escape.

After their story is told, the twins merge again, having fatigued themselves from their separation. They then tell ‘Batman’ that not only does the superspeed burn up their individual energy while separated, but also physically ages them. Though appearing to be in their twenties, they are actually only six years old!

‘Batman’ offers them help (in the form of Bruce Wayne and the Batcave) in exchange for their partnership. Bruce, looking on from the Batcave, explains to Matt that False Face means to heal them only to take on their identities, and powers, for himself.

Melanie, now dressed in her Ten garb from her Royal Flush days, prepares to confront False Face and Splitt. After a little hesitation, Bruce gives her a utility belt from Terry’s old costume, explaining that she is likely more savvy with its contents than False Face, thereby giving her the advantage. She then leaves the Batcave on her playing card glider, more readily equipped to face the villains.

Matt worries about Terry, and Bruce places a call to ‘someone special’. Across the city, Terry, sleeping on a bench, is awoken by some police officers. After explaining that he can’t remember who he is, an officer scans him and a warrant for him pops up for murder. They attempt to seize him, but Terry’s muscle-memory literally kicks in and he manages to escape.

Meanwhile, ‘Batman’ and Splitt race towards the Batcave. False Face taunts Bruce and Matt on the comms before Melanie surprises him from behind and quickly puts the utility belt gadgets to work. As she tosses some explosives towards him, however, Splitt rushes in and returns the volley, causing the pellets to knock her from her card instead, and is knocked unconscious as she hits the ground. ‘Batman’ stands Ten up and offers Splitt to kill her, which gives the twins pause and deliberate inside Caden’s head.

In the Batcave, Matt is anxious to help Melanie. As Bruce reassures the boy, a figure speeds into the cave and, after a little bitter banter, rushes out to help.

Splitt continues to deliberate killing Ten when Bruce’s mysterious speedster ally zooms in and retrieves Melanie. The villains look on in shock as the figure is revealed to be the Flash!

Analysis: There’s a lot of interesting identity work going on here. Let’s talk about Splitt’s origin story a little. We have Caden born as a single child, with his shadow-self Adam locked inside. Adam is the gentler self, compared to Caden’s more ask-questions-later type. I’m no psychoanalyst, but this reminds me of the Freudian concepts of the Id, Ego, and Superego. Adam would be the equivalent to the Superego here, being more concerned with the moral consequences of their actions…and also literally the voice of conscience inside of Caden’s head when they are merged. Caden is the one driving the body though, ultimately. I also find it interesting that Adam (Hebrew; ‘man’) is the name given to the ‘shadow self’ that is locked inside the body of Caden (Welsh; ‘spirit of battle…but also Arabic; ‘companion’), which indicates on a deeper level that Adam is the truer ‘identity’ of Splitt, while Caden is more of a vessel. This, then, might expand to the other villain in the story: False Face. This character seemingly has no outward definition; he’s just mimicry of whomever he wants to be. His inner self is an opportunistic villain willing to do anything and everything to get what he wants. Everything about False Face suggests that he/she is pure Id.

The art is great, and I love the definition of the outlines as well as the attention to body movements I noticed, especially in Terry’s fight scene. I always enjoy different artistic stylings when it comes to flashbacks, and Splitt’s childhood scene used a more simplistic approach compared to the edgier adult timeframe. Now that we have that origin story, I can appreciate Adam’s suit colors, given that he’s the ‘shadow self’(speaking of that, I also can appreciate Adam’s translucent speech bubbles for the same reason). I also like that Splitt’s color scheme contrasts Melanie’s Ten costume. I do have one little thing with the art, and it’s not bad so much as it got my hopes up: when we see Terry woken up by the GCPD, on the left panel we get an outline of a purple-and-black figure that I anticipated was a Spoiler costume. It turned out to be the officer’s partner, though, and I’m guessing the violet color was supposed to be an effect of lighting, but my hopes for a Stephanie Brown appearance were raised for a few moments. Ah, well….*hint hint*….

Final Thoughts: Initially this seemed to be a sort of ‘throw-away’ story for me. I had found the False Face angle to be mildly interesting, and I hadn’t really cared at all about Splitt. But this issue has switched that around for me. While I’m even less interested in False Face, I’m actually intrigued to see what happens with Adam and Caden. Also, I really wish that had been Stephanie Brown standing over Terry. But overall, this was enjoyable.