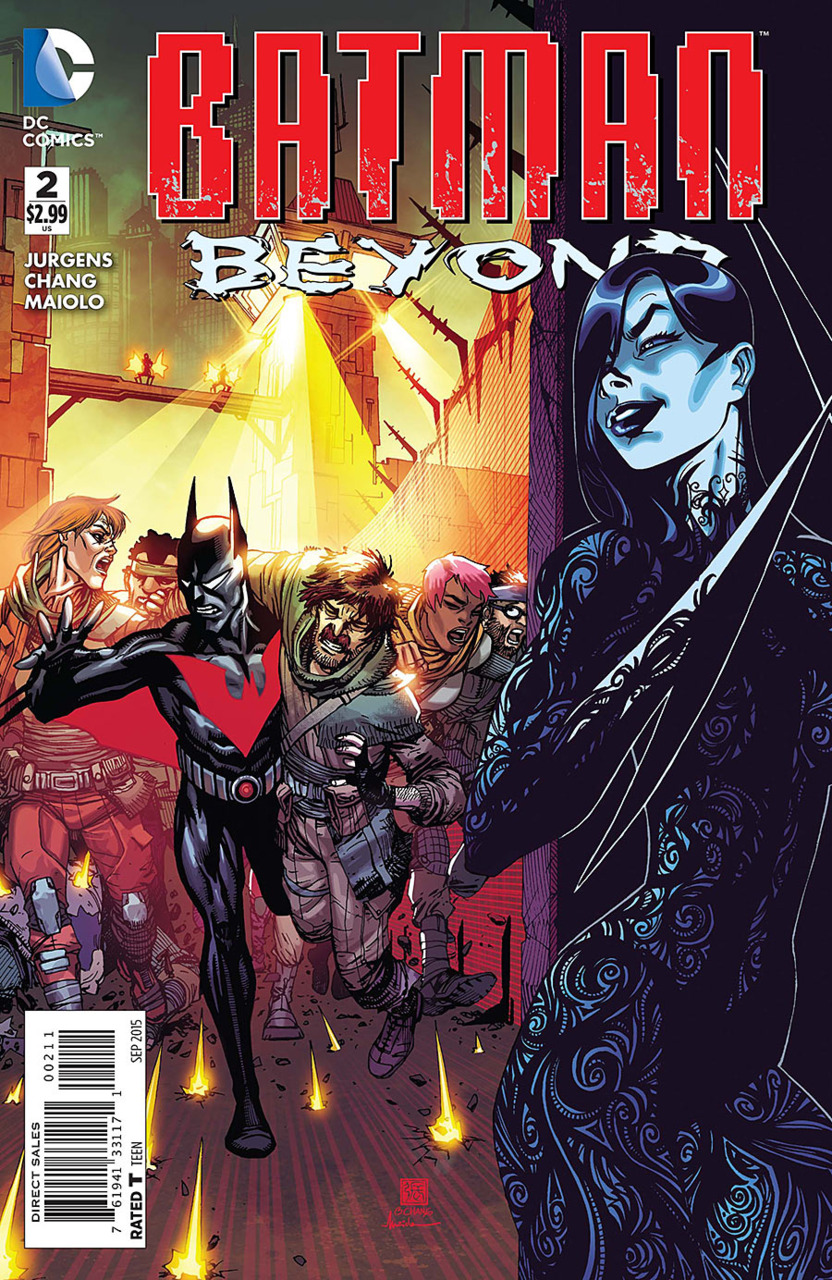 Brave New Worlds Part 2 opens with Tim, Barbara, and Max trying to avoid the processing at the Lodge. We see other humans being taken down by drones. Only Tim, Barbara, and Max escape while Tim chastises Barbara for leaving the others to whatever fate awaits them. He says that the Barbara Gordon he knows would never do that. Barbara responds that she would if she was a prisoner here.

The three come across three individuals. One has a creepy smile on his face while the other two have no face at all. All they say is that the lodge is happiness and home. The three are able to escape into a hatch. While on their journey they encounter other brainwashed people.   Barbara questions Tim about his lack of aging. He disappeared decades ago and only appears to have aged a few years. Tim recounts his failed attempt to destroy Brother Eye in the past after Terry’s death. Max and Barbara recount the years of Brother Eye infiltrating the networks to rebuild the world as it sees fit. The Lodge was created to mine the human mind; the only thing Brother Eye is unable to access. In the processing, Brother Eye uses drugs to empty the victims mind. The people with the happy expressions on their faces are stage 1. The blank faced people are the result of stage 2 while stage 3 is becoming cyborgs of Brother Eye. The Justice League have fallen to stage 3 which we have seen earlier. The three are discovered by a drone and in the rush to escape Max is taken by a Victor Stone, Cyborg Brother Eye Cyborg. The priority is to keep Tim alive because they think he has the way to free them. Barbara speaks of urban myths of the return of Batman. Tim reveals to Barbara that he is the new Batman.

At a control room, we see a woman in shadows. She is being told that six prisoners have been gathered for processing. The only hitch is that one of the prisoners, Tim was replaced with an unknown woman, Max. The mystery woman needs to find out where and who the missing man is.

Tim tells Barbara that the suits power supply was exhausted when he was fighting the Superman Cyborg and he needs to power up. He is still not exactly sure how the suit works.

Max is going through the processing. While she is being processed the mystery woman probes her mind to discover who the mystery man is. We see that the woman is Inque in humanoid form and she knows that the man is with Commissioner Barbara Gordon.

Tim and Barbara are discovered. Barbara orders Tim to run while she keeps them busy, Tim refuses. Barbara is grabbed by Inque. And Tim comes up the hole to find himself face to face with a hulking Brother Eye cyborg. Inque is really after Tim and the pairs go into fighting mode. In the fight Tim taps into the cyborg’s power supply and A.L.F.R.E.D. and the suit are reactivated. Batman attacks Inque freeing Barbara. Unfortunately Tim has no knowledge of Inque’s strengths and weaknesses and the fight does not go well for Batman. A.L.F.R.E.D. reports to Tim that water has had some effect on Inque in the past. Tim gets overconfident and attempts to use a water hose which Inque avoids and then is able to attack Batman from behind. Barbara is quickly taken out by Inque. While Batman is down he sees Max but it is quickly revealed that she has finished stage 1 of processing. We end with “Let’s process the Batman”.

This was a standard issue for me. The story progressed in that in between avoiding the villains both Tim and Barbara with Max were able to catch up on each other’s stories.

The only main action scene here is the fight in the end which ends in a cliffhanger that makes me want to see what will happen next. Is it too late for anyone who has been processed by Brother Eye? It certainly appears that it may be for those that have become the Eye’s cyborgs, which is bad news for the Justice League. What about stage 1 and 2. Is it too late for Max? Only time will tell.

Overall, it is a good issue but I was left with wanting more which may be what the creators are hoping for.