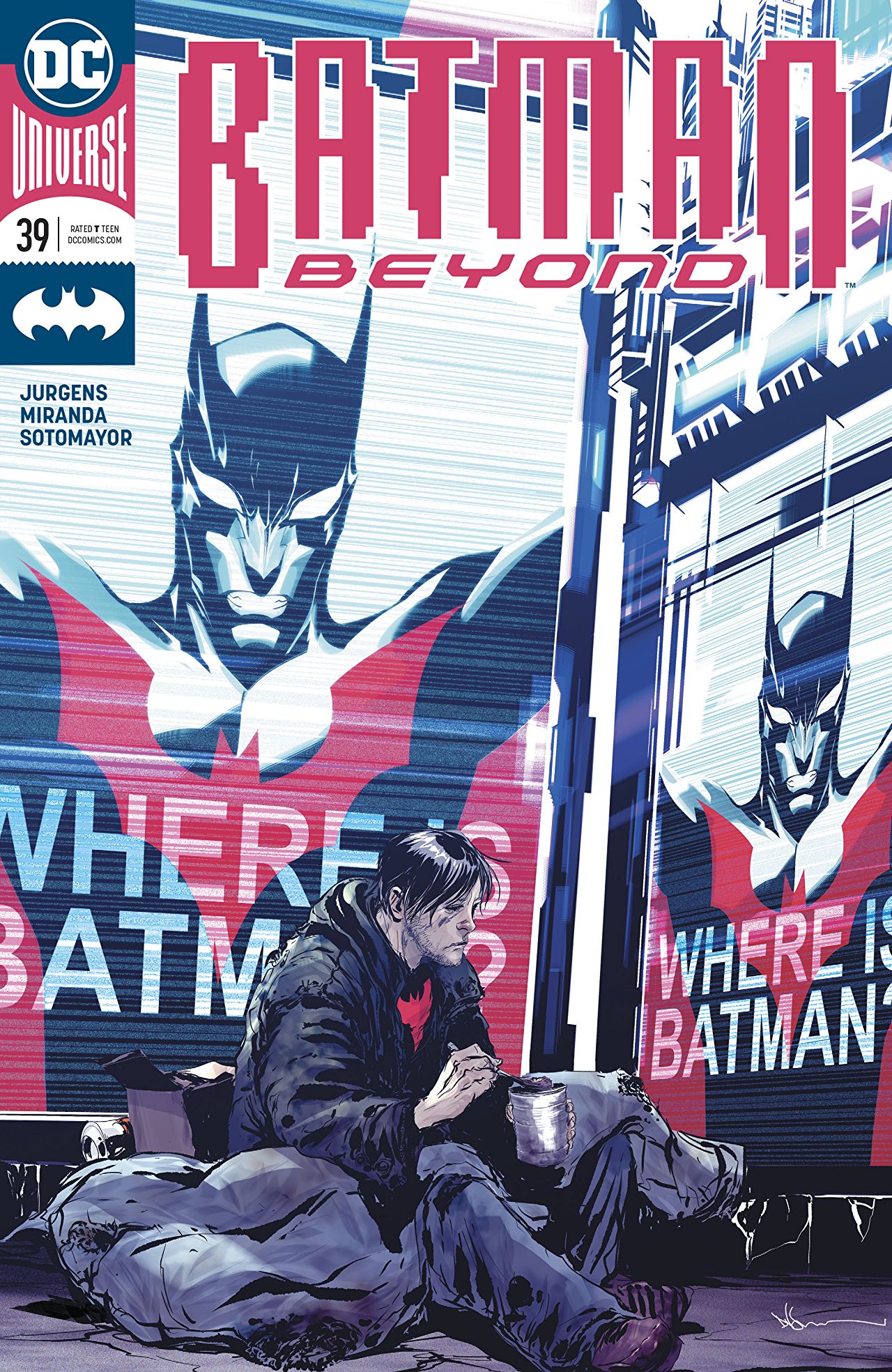 Overview: Batwoman and Blight face-off (so to speak) while Constance learns something new about Terry AND her old boss.

Synopsis (spoilers ahead): Decades from now, Batwoman regains consciousness after the events of the previous issue. From behind, a voice taunts her choice to replace Batman. Batwoman struggles to recover, and the figure grabs her throat. Alfred, the suit’s AI, informs Batwoman that her radiation levels are spiking. She then deduces that the figure is none other than Blight reborn.

Through exposition, Blight reveals that when he ‘died’ as Derek Powers on the sinking submarine, the radioactive portion of his being survived and was freed, becoming more powerful. Engaging in combat, he also reveals that he knew that Batman had been Terry McGinnis and that he, himself, was the reason Batman existed at all.

In the Batcave, Bruce Wayne and Matt McGinnis listen in on the happenings, and Bruce explains how Derek Powers had been responsible for the McGinnis father’s death. He also vows that Blight would never hurt anyone again.

While Bruce and Matt deliberate on the skills and identity of the mysterious woman in the suit, Batwoman and Blight continue their battle. While capable of keeping up with the radioactive man, her best shots only serve to crack his suit, thereby increasing her chances of contracting radiation sickness. She seems to be fighting a losing battle.

Meanwhile, in the Lower Levels of Neo-Gotham, Constance and the amnesiac Terry McGinnis squat in a derelict building, eating the stolen goods from the supply truck. Terry suggests that while his memory loss leaves him with nowhere else to go, at least Constance should have something, and somewhere, better to go to. She reveals that she’s no better off than him. After a whistleblower reported her unlawful experiments, she had been effectively ruined. It was because of Warren McGinnis that she was ruined, but at least he couldn’t be a nuisance to her anymore, since he was murdered not too long after.

Constance pulls out her retina scanner and tells Terry that she should be able to place a name to his face now, as long as he was on file somewhere. She scans him and finds out that he is, in fact, Warren McGinnis’ son. Stunned that her new partner is the son of the man who ruined her, she decides to keep the information to herself for now.

Elsewhere, Blight has gotten the better of Batwoman. Telling her he’s going to demask her and then burn off her face, Batwoman notices that Blight’s own face is slowly dissolving. He reveals that he needs to find another host body in order to retain himself, and she’s the lucky one to provide one for him. Before he can transfer, Batwoman detonates an explosive between them, saving her for from Blight, but also, unfortunately, destroying the one remaining support column of the building, which causes the roof to cave in on both of them.

Bruce and Matt look on in horror, but the Batsuit’s sensors activate. They witness Batwoman fly safely away. What isn’t apparent to them or their sensors, however, is if Blight survived.

Beneath the wreckage, the radioactive villain arights himself, having been sealed safely inside his containment suit. While still not down, he remains in danger of being soon out. Now in desperation, he makes a phone call.

Terry and Constance are taking a stroll on the lower levels when Constance receives a call. It’s from Derek Powers! He tells her of his plight and that he needs a new host body immediately. Constance tells him she has just the person for him and leads Terry to their new destination.

Far away from Neo-Gotham, Batwoman descends from her flight to a cabin in the woods. Deactivating Alfred, she mentally recovers from her battle with Blight. Exhausted, she removes her cowl and plops down on her couch for a well-deserved rest.

Analysis: This issue has two covers, and while I think the variant depicting Batwoman is beautifully done, I’ve got to say I like the original cover better. It shows a homeless Terry McGinnis (wearing a Batman Beyond shirt) sitting against what appears to be electronic billboards asking ‘Where Is Batman?’ It reminds me of Total Recall, and it made me chuckle a bit.

This arc ramps up as we take even more steps closer to unraveling the mysteries surrounding Batwoman’s appearance and Blight’s return.

While most of our Batwoman time is involved in her battle against Blight, and we get the same arguing between Bruce and Matt as the previous issues on whether she is Barbara Gordon or Melanie Walker, we do finally get the promise of a reveal when she removes her cowl at the end of the issue. Attached to the cowl, of course, is a wig of the familiar red hair we know as Kate Kane’s Batwoman. The base of operations she runs out of is so minimalist that I’m led to believe she’s just recently acquired it or that the training and experience she refers to has molded her into living with only the barest of necessities. While I’m still convinced that the new Batwoman is NOT Barbara Gordon, I’m also beginning to doubt my notion that it’s Melanie. Her speech doesn’t seem to mesh well with the ex-Royal Flush gang member, and while we don’t get to see much of anything of the face beneath the cowl, it seems by that she either wears her hair short or bald. Her inner monologue also doesn’t exactly fit the character we’ve come to know. It’s almost too disciplined, and I’d expect her to be someone from the military or League of Assassins.

Blight’s new plight is introduced in this issue. While he is far more powerful than he had been before the submarine incident, it comes at the cost of his own dissolution. This is reminiscent of the Preston Payne version of Clayface, even to the point of needing a containment suit (is that a Lex Luthor suit?) to keep himself whole. I think this new status quo can open the character up to new, more interesting storylines in the future.

And then there’s Constance. She and Terry have seemed to hit it off pretty well thus far, and it seemed as if they were really going to develop a true friendship by the end of the arc, but with the reveal of his identity as the son of the man that brought her to poverty and the reintroduction of the boss she looked up to, it now seems as if her intentions are even less altruistic and more devious. After all, she plans on having her boss absorbed into the body of her new friend.

The art in this issue is wonderful and consistent with the work Miranda and Sotomayor have been using. Its very reminiscent of the cartoon (the fight between Batwoman and Blight) and the more detailed works of the modern comics industry (the wrinkles on Bruce Wayne’s face, for example). I also appreciated the framing of the flashback sequences, in which the panels were bordered by a glitchiness that fits the title’s futuristic tone.

Final Thoughts: Jurgens and the team continue to spark interest in this arc by adding something new to each of the running storylines. I’m worried that with the reveal of Batwoman’s identity next issue, we are just going to wind down our time with her. I fully expect to see Terry back in the suit again within the next arc or two, but I hope we don’t lose this character. Jurgens has done a wonderful job expanding this universe to include continuity with the events of the mainstream Bat comics, but I worry that when the arc ends, so will the story of this Batwoman (just as we seem to have lost sight of Damian).