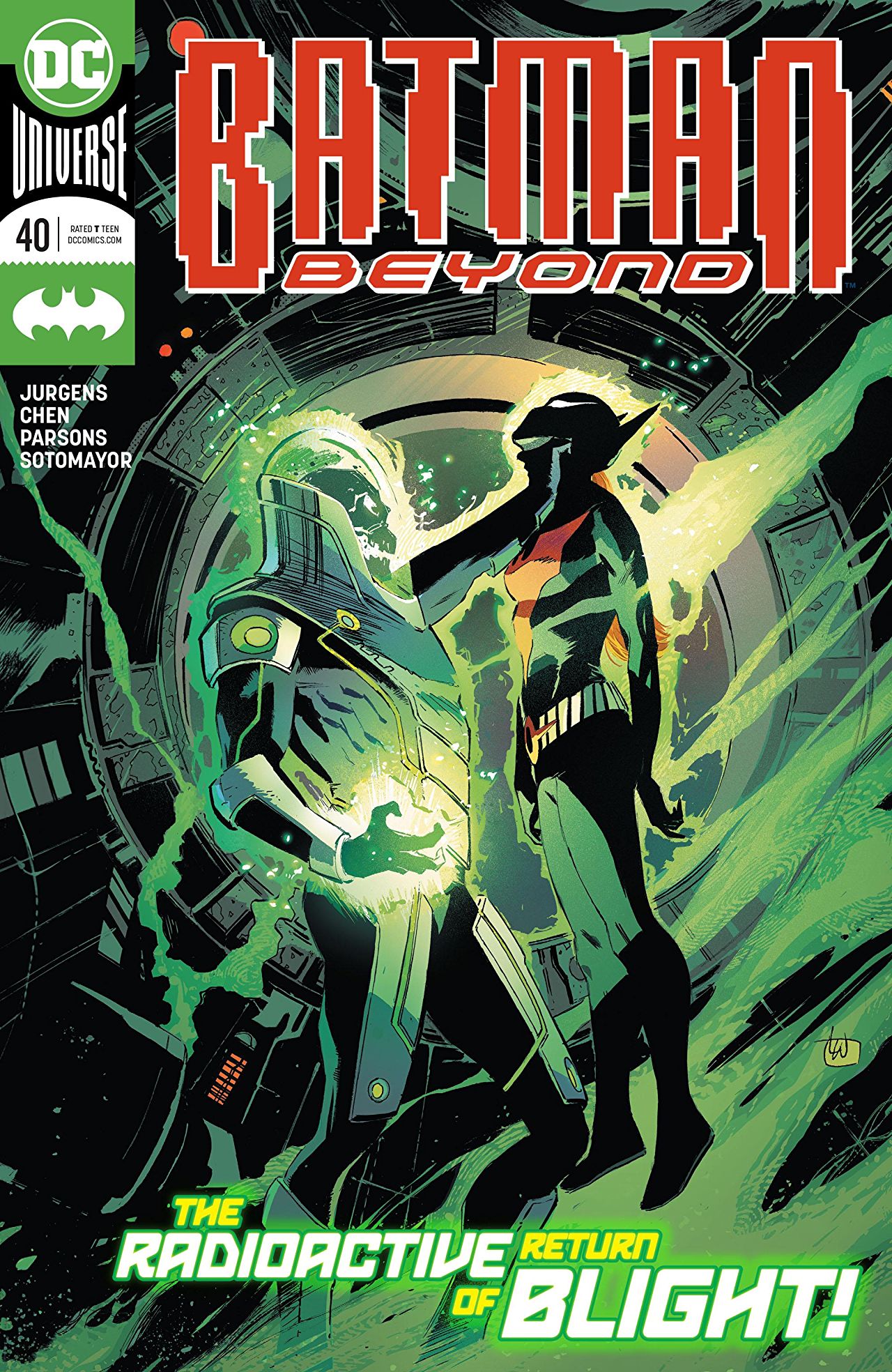 Overview: With Batman missing in action, Blight has returned to stake his claim but finds that a new challenger has arrived in Neo-Gotham.

Synopsis (spoilers ahead): The issue opens decades from now. Derek Powers, now going under the moniker of Blight, is seated like a radiated monarch on a makeshift throne. Our hero, Terry McGinnis is reportedly missing in action due to False Face stealing his memories. Nevertheless, Constance appears before Blight with Terry in tow. Constance explains that she found Terry wandering about and brought him to Blight in the hopes that Terry may be able to obtain some type of employment. Derek Powers is happy to oblige Terry in that it will allow for his revenge to be extracted on Bruce Wayne. With Terry seemingly having no memory of past events, let alone also being charged with murder, it puts our hero in a rather dangerous position. Seemingly unaware to Terry, Blight is his father’s killer.

We cut to a female donned in a similar costume to our future Batman. She is in the midst of trying to save someone from a building that is about to be destroyed. This Batwoman runs into a couple of cops who are fleeing the area due to the building apparently being consumed by something not yet known. It does not take long for Batwoman to decipher that a device is the reason for all of the calamity. She spots a female cop above her and is able to retrieve her just as the ground crumbles from beneath her feet. As Batwoman flies away, she suspects that the culprit of this destruction is none other than Derek Powers.

As if on cue, we are then rejoined with Blight and Constance in a sinister conversation. It is revealed that while Blight’s suit protects those around him from the radiation that consumes his body, the radiation itself is destroying his body at a rapid rate. Because of these developments, Derek and Constance are seeking a candidate to become Blight’s new host. Their unsuspecting volunteer in this medical experiment comes in the form of one Terry McGinnis.

Back at Wayne Manor, Melanie, Barbara Gordon, Bruce Wayne, and Matt McGinnis are debating the identity of Batwoman. Just as the conversation becomes something of a stalemate, the alarms are sounded as Wayne Manor is under attack. The security cameras reveal Blight’s men arriving to offload the same device used to destroy the building from earlier. It is now known as the Devourer. Bruce Wayne’s suspicions as to the mysterious identity of the Batwoman of Neo-Gotham are put in a wringer when Batwoman shows up. She evades Blight’s arsenal of attack, suffering non-fatal injuries. The Devourer is halted when Nightwing shows up on his sky cycle and disarms it. As Nightwing attempts to assist with Batwoman’s injuries, the latter takes to the sky abruptly.

The issue ends with Nightwing asking for Bruce’s help in regards to the apparent disappearance of his daughter, Elaina.

Analysis: The cover of this issue depicts Blight in grand and dramatic fashion. It is good to see Derek Powers in this role. It instantly draws the reader into the storytelling within the issue. Overall, the art team did a good job of presenting the world of Neo-Gotham and its inhabitants.

Although I did find some of the dialogue in this issue to be a bit hokey, the story is interesting enough as it is straight-forward in its introduction to a lot of intriguing elements.

It is neat to see a seasoned Nightwing, and I honestly would not mind if this book potentially was renamed to Batwoman Beyond at some point in the future. I understand that may be an unpopular opinion, and I am fine with that. I just find the Batwoman Beyond character to have some good potential because of the creative decision to make Batwoman Dick Grayson’s daughter. I like this aspect and thought it was a nice touch by writer Dan Jurgens. It adds not only to Dick Grayson’s legacy, but it also gives the Batwoman persona more depth.

All in all, I like the potential world-building going on here in Neo-Gotham. I find that this area of the DC Universe remains largely untapped.

Final Thoughts: With lots of action and an interesting story to boot, it will be interesting to see how this all shakes out.