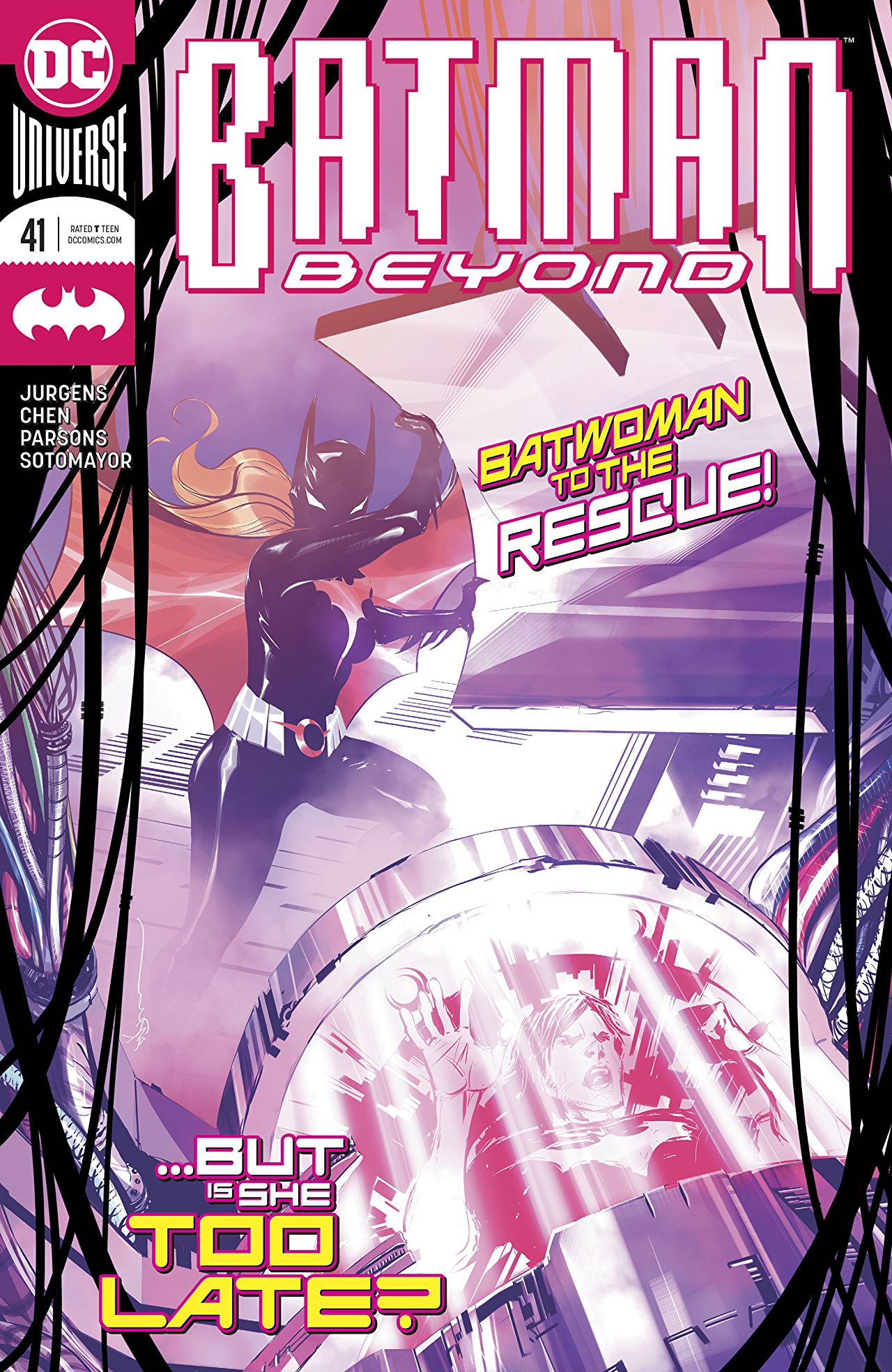 Overview: The Bat-Family discover the new Batwoman’s identity, while Terry falls into Blight’s trap. It’s up to Batwoman to rescue not just his body, but his very consciousness.

Synopsis (spoilers ahead): Decades from now, a still-amnesiac Terry McGinnis expresses his gratitude to Constance for getting him a job with Derek Powers, former CEO of Powers Industries. Entering a secured lab, they are greeted by Powers. Terry, eager to begin working, asks what his first task is. Constance, up until recently his literal partner in crime, knocks him unconscious with a heavy piece of equipment. Powers berates her, worried that she may have accidentally murdered his ideal host body. Constance reassures Powers that she’s got him covered and helps him across the lab to begin the transfer.

Meanwhile, at Wayne Manor, Bruce questions the recently returned Dick Grayson, whose daughter Elainna is missing. Matt deduces that Elainna must be the new Batwoman, and the rest of the group agree she’s the only logical choice, given the circumstances.

We learn that Dick had always been transparent about his life as a vigilante, with the goal of steering Elaina away from the life. He tried redirecting her sense of heroism by enlisting her into the military, where she obtained the skills necessary that would eventually lead her to follow in her father’s footsteps.

After an appropriate amount of self-deprecation and some reconnect with Barbara, Dick is ready to track his daughter down, while Matt interjects that Terry needs to be their top priority.

In her isolated lair in the woods, Elainna suits up as Batwoman, readying herself to head to Blight’s likely location. She decides against using the suit’s full capabilities, not wanting to attract Wayne’s computers.

In the lab, Terry wakes up to find himself encased in a translucent, though claustrophobic, chamber. He pleads with Constance to let him out. She, along with Blight, who is connected to the chamber by wiring and tubes, explains to him that he’s going to transfer his consciousness into Terry’s body. When Terry asks what will happen to him once Blight takes over, he is told that he will die. Again, Terry pleads with Constance, but she is all on board for the transfer in order to be with her lover once more.

Constance begins work on the transfer but soon runs into a block. Evidently the amnesia caused by False Face needs to be figured into the equation. Terry remembers everything as Constance restores his mind before she’s able to wipe it. Before she’s able to continue the wiping process, however, the power shuts down.

Batwoman suddenly appears and incapacitates Constance. As Batwoman prepares to engage Blight, Terry catches sight of her and mistakes her for Batgirl, and Elainna recognizes him as Terry McGinnis. There is no time for explanations, however, as Blight moves in for the fight.

Constance regains her composure and, desperate to see her lover restored, continues the transfer process. Unfortunately, she uses too much power, and the containment capsule begins to overpower, racking Terry with pain. Blight commands Constance to shut off the power, but she rebuts that this is the only way to distract Batwoman enough so they could flee. Batwoman, however, extends her claws and severs the electrical wires joining the container to Blight. Elainna rips the door off, lifts Terry out, and flees towards the Batcave.

Blight, meanwhile, begins to emit a dangerous amount of radiation. He resolves himself to die, but not before assuring himself that Bruce Wayne will die along with him.

Analysis: Events and mysteries are getting tied up pretty quickly here toward the end of this arc. Constance’s betrayal is revealed. The Bat-Family learns Batwoman’s identity and motive. The amnesia trope is finally resolved, far earlier than I thought it would be, actually.

Bringing Dick back into the fold, for the time being, is fun, and I enjoyed the under-the-surface connection between him and Barbara. It felt appropriately bittersweet.

It was a little jarring that it was Matt McGinnis, the least experienced of the group by far, who put together that Batwoman was none other than Elaina. Dick was far too shocked at the revelation, after realizing that a new character was running around in a Batsuit, of all things, as soon as Elainna turned up missing. It was a little funny, though, later on when everyone else is ready to search for Grayson’s daughter, Matt’s own concern for his brother seems to be fully ignored.

I do like Elainna’s pseudo-origin story, though. Growing up the child of a former super-hero and being unintentionally pushed into training to follow those romanticized themes. She even creates a base for herself far outside her ‘jurisdiction’, a la Wayne Manor.

Constance gets to me a little bit. For half of this arc and the entirety of the others since getting to know her, she’s developed a rather close relationship with Terry. They depended on each other and became a sort of Bonnie and Clyde team. The moment Powers returned, her entire personality dropped, and she’s written as almost an entirely different character. She then seems to be relegated to a scientist-thug characterization. I wish the previous relationship had held at least some organic leftovers. That side of this story would’ve been more interesting if she herself had some inner conflict to resolve.

At the end of the issue, Blight swears to take vengeance on Bruce Wayne. This seems a little odd, and honestly, by this point, his vendetta seems a little bit off. He’s far more obsessed with punishing Wayne than he is in trying to not die himself.

The art is pretty solid, but I was thrown quite a bit early on in the issue. Bruce Wayne looks a lot younger than I’m used to seeing, and there are a couple of times Dick Grayson seems to be drawn as if he’s about to sneeze. The guy’s missing his daughter, but I think the former Nightwing wouldn’t look as haggard as he’s depicted here. Other than that, the issue looks pretty sleek. I still love the Batwoman’s design, and I hope this arc doesn’t end with her stepping out for good.

Final Thoughts: We’re wrapping up this arc, and I worry that with Terry’s memory reinstituted, we may lose our newest hero. I’ve enjoyed the story thus far, and I don’t want it to tie itself back up into the old status quo, as we’ve seen before. Overall, though, not a bad issue. It was action-packed but didn’t neglect to keep storyline interest with revealing information.