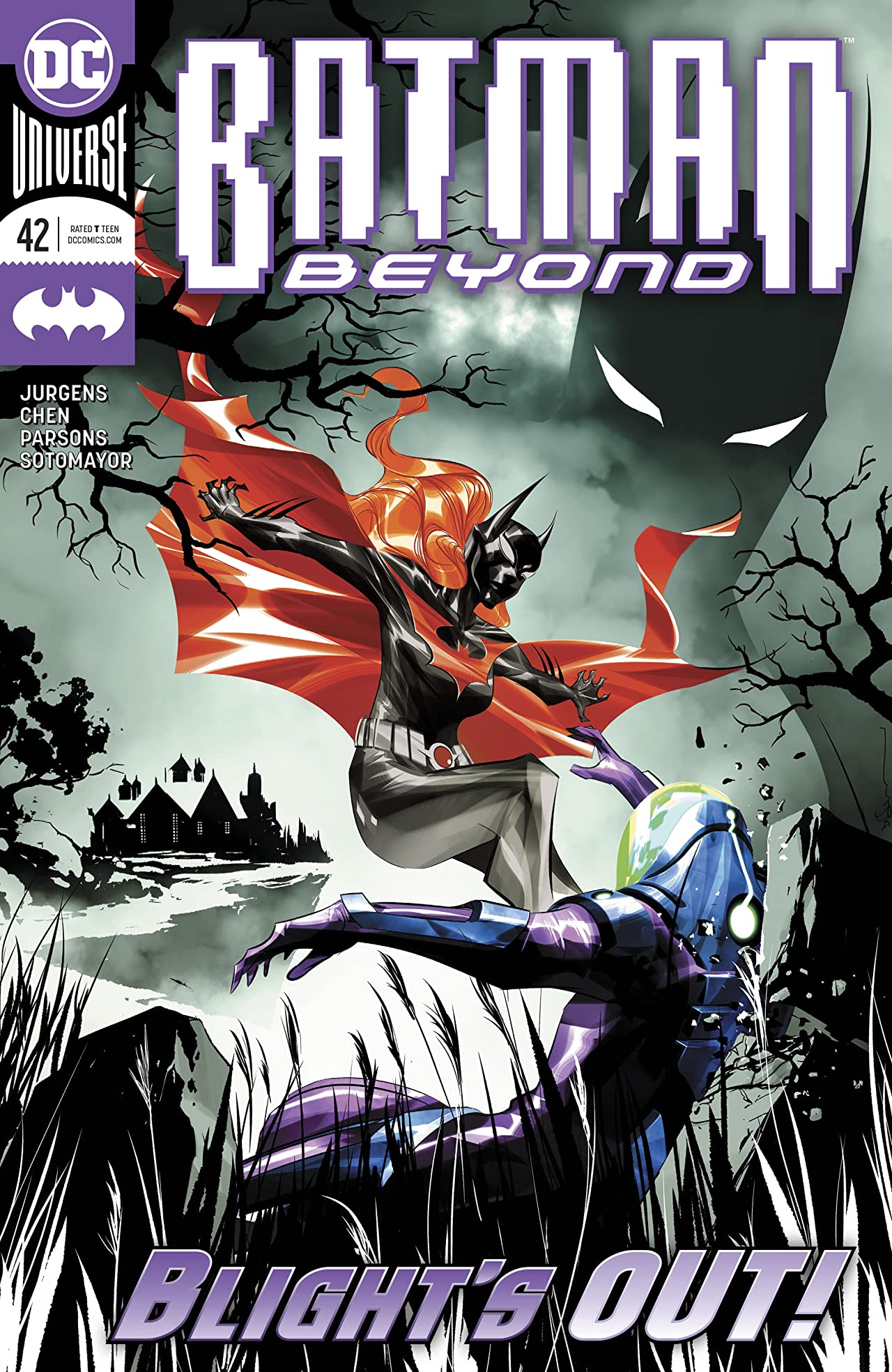 Overview: With Terry’s memories back, are he and the new Batwoman enough to stop Blight for good?

Synopsis (spoilers ahead): Decades from now, Derek Powers, more Blight than man, approaches Wayne Manor (specifically the Batcave) on an armed hovercraft to destroy Bruce Wayne before he, himself, disintegrates from his rapid radioactive deterioration.

Meanwhile, Bruce, Melanie (aka Ten of the former Royal Flush Gang), Matt McGinnis, Commissioner Barbara Gordon, and Dick Grayson head down to the Batcave, discussing the revelation that Batwoman is Dick’s own daughter Elainna. They brainstorm on ways to try to contact her after her battle with Blight but are interrupted by the radioactive man standing victoriously atop the current Batmobile. Blight begins his attack on Bruce by launching a missile at the older Batmobile, with our heroes dodging the explosion just in the nick of time.

In the night skies over Gotham, Batwoman carries a renewed Terry McGinnis toward the Manor, explaining everything but her own identity. Terry fills her in on Blight’s foiled plot to transfer his consciousness into Terry’s body. Upon nearing the access portal to the cave, they discover that Blight must have infiltrated the cave and, realizing Derek Powers’ desperate gambit to take Bruce Wayne down with him, press hurriedly on.

Blight stands over Wayne, declaring his victory while a downed Bruce mocks him, buying enough time for Batwoman to tackle Powers away and into the wrecked Batmobile. As the rest of the party members regain their senses, Terry McGinnis sprints down a corridor and finds a sealed vault that spells good news for him and the rest of the Bat-Family.

Though Batwoman’s surprise attack kept Bruce alive, Powers soon gains the upper hand on Elainna and, his radioactivity growing more powerful as his body decays, threatens to burn Batwoman’s skin from inside the suit.

In an instant, however, the radioactive man is once again blindsided by a bat; this time by Terry McGinnis in an older version of the Batsuit who, fueled by anger, pummels Blight and sends him crashing into a display case.

Elainna assists Terry in trying to take down the increasingly powerful Blight, only managing to slow him down until Dick Grayson retrieves a pack filled with a hardening gel (once used on Firefly) and envelopes Powers inside. Bruce warns that the effect will only be temporary.

As the gel begins to weaken under Blight’s power, Terry pilots the Batmobile, captures the intruder in a winch, and races off with Powers in tow out into the waters below. Blight taunts Batman that he’s already proven that he can’t be drowned. Terry knows this already, and it’s not his plan to drown Blight. He engages the self-destruct on the Batmobile as Dick and Bruce look on in horror, realizing that Terry plans on burying Blight and himself on the ocean floor forever.

They shield their eyes from the Batcave monitor as they watch the blinding blast of the explosion. Bruce calls for Terry with no response. Alfred cannot locate his signal. Matt begins to berate Bruce for allowing his brother to sacrifice himself when a battle-torn Terry reemerges into the Batcave, having barely survived the destruction.

As a warm reunion takes place and Elainna explains her role to her father, Bruce has one question: who will continue on in the Batsuit?

Analysis: I really liked the main cover to this issue, which depicts Batwoman crashing down onto Blight, shattering what appears to be a tombstone on a foggy night some distance from Wayne Manor. In the skies watching from above is a shadow of the Bat. Besides being a beautifully drawn cover with a nearly old-school horror feel, it also showcases the issue: Blight’s approach to Wayne Manor, the rematch with Batwoman, and the shadow above, indicating two things; one, that Elainna is trying to live up to Batman’s name, and two, Terry’s return and assistance in taking Powers down. The caption, ‘Blight’s Out!’ also lets the reader know what they’re in for. It’s a nice, refreshing change from the majority of covers I see that seem to give somewhat inaccurate details about what’s inside.

I’ve got to admit that I’m still confused about Derek Powers’ obsessive need to destroy Bruce Wayne, so much so that he absolutely NEEDS to sacrifice his final moments pursuing Bruce. This is even after understanding that he knows that Wayne was the former Batman. He manages to get a small amount of revenge by destroying the older Batmobile, again driving home the point that it’s Bruce he is after. It seems that he too quickly scrapped the body-snatching experiment that was moments from working.

Blight: “Killing the original Batman makes me far more than that.” Bruce: “Whoever that man is, it won’t be you.”

I also like it when “classic” villains and gadgets pop up in this book. The weapon that Dick uses to temporarily hold Powers in a sort of cement glue had been designed for Firefly. I always enjoy little Easter eggs like these. Although I am curious how Bruce wore that bulky pack when he used it. Seems like it wouldn’t be compatible with his cape.

Burying the radioactive man in the depths of the sea is a good immediate solution, but I wouldn’t think Bruce would be too content with that being a permanent thing. A body always needs to be accounted for, and I hope this is resolved in a later issue. I also would like an explanation as to how Terry escaped the self-destructing Batmobile.

I’m glad the story wrapped up here, but it did seem a little rushed. Terry came back to full form pretty quickly, and it seemed like he came in a bit too all-knowing. I wish the comeback was a little bit more exciting.

This also leaves me worried about Batwoman. Her story was my favorite of this arc. With Bruce’s question of who wears the suit tomorrow, Elainna telling Terry earlier that she was just filling in for him and the fact that one suit is destroyed – I’m afraid we may not get to keep her. Now we’ve lost a potential Robin in Matt and seemingly Batwoman in Elainna.

Final Thoughts: This was a surprisingly mediocre ending to an arc that I had been really enjoying. The buildup of Batwoman seems to have quickly ebbed out, and the convenient return of Bat McGinnis makes things appear to be going back to the status quo.