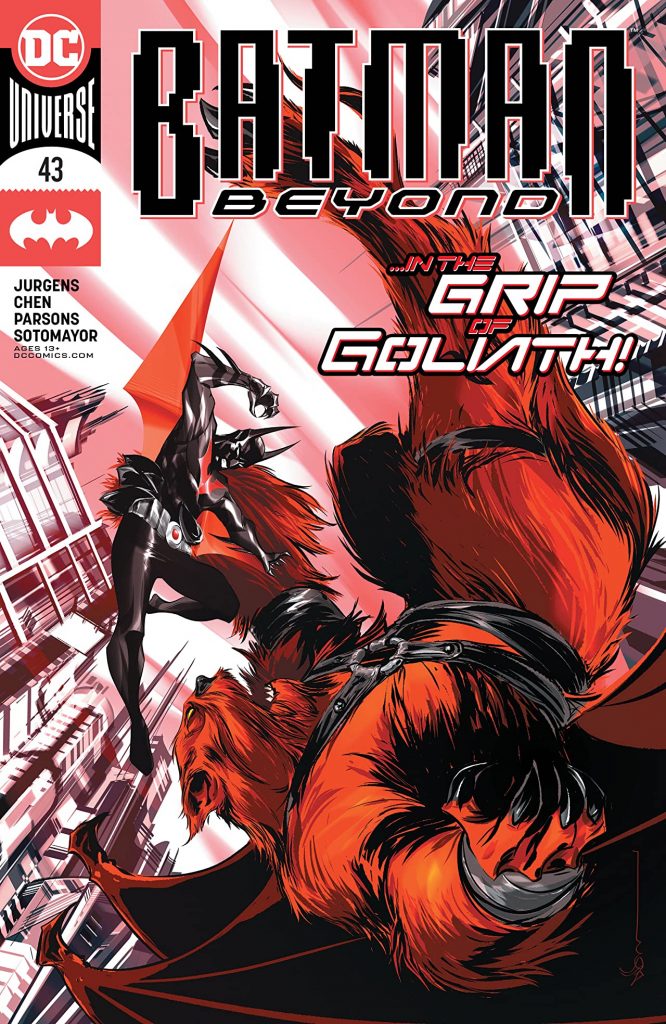 Synopsis (spoilers ahead): “The Eradication Agenda opens in the Himalayas to a chant of “ZEH-RO.” We see a figure approach the compound of the League of Assassins and open the gates. The figure’s sword is dripping with blood. As he approaches the crowd inside, he removes his hood, revealing grey hair with the statement: “The deed is done.”

We see his front. He is a man wearing goggles and a green cloak much like the Demon. He declares that their destiny is theirs to define.

Doru approaches with his cloak in his hand offering it to replace Zeh-Ro’s, which is soiled with blood. Zeh-Ro accepts it with the statement that the bastard son of the Demon is gone. Now the true witches of Ra’s al Ghul will be realized.

In Neo-Gotham, Batman is in the skies of a stormy night. He is fighting thugs. In midst of the fight, Batman swoops in to catch the two thugs and deposits them on a roof. It is stated that the two are stealing data from a flying disposal team.

The scene changes to a park. We walk into a conversation between Elainna and her father, Dick Grayson. Elainna is sitting on a park bench next to Barbara Gordon. Dick and Elainna are arguing about donning the costume to fight crime as Batwoman. Dick is set against her doing this, stating that it only leads to tragedy. Elainna insists that taking the mantle is what she wants to do and walks off in frustration. Barbara steps in to talk to Dick. She tells him that Dick needs to let go and allow his daughter to be the woman she wants to be. Barbara further tells him that he needs to support her choices. Barbara then follows Elainna. Elainna immediately thinks that Barbara is going to support her father’s arguments. Barbara just says that Elainna knows her better than that. Barbara reminds Elainna that Dick was raised by a man consumed by his tragedy and as a result set himself a life devoid of peace and tranquility.

Over Neo-Gotham, we see a flying car heading to the new Batcave. Matt calls this the “Batsuite,” much to Bruce’s chagrin. Bruce owns the immediate buildings that surround them, and they are outfitted with holographic projectors that obscure the activities of the suite. They are also surrounded by “windows” that are really protective, translucent energy shields that will allow entry. An alarm sounds, and there is trouble at the Gotham government building. Slamjackers are attacking. These are the same guys that Batman fought earlier. They are on a quest to gather every bit of information. Batman passes through the window and appears to pop out of a concrete wall.

Terry tells us that the rain is cold, and Bruce increases the suit’s thermals and reduces those tactile sensors. Bruce also calibrates Batman’s optics to account for the pouring rain. Batman finds the Slamjackers and engages. Terry pulls out the razor-edged Batarangs. Bruce questions the tactic, but Terry retorts that after what he has been through, he wants to make sure that he is not victimized again. Bruce tells him that he is not authorized to use this level of force. Terry responds that it is time the criminals learn that Batman is done messing around. Bruce tries to warn Terry as we see a large hand grab Terry from behind. The hand belongs to Damian Wayne’s monster, Goliath. We quickly see that Goliath is not attacking Batman, rather he wants Batman to follow him.

Batman follows Goliath into a building where Goliath has the battered body of Damian Wayne.

Analysis: It is hard to critique this story as it is only the beginning and not much was revealed. We do not know who this Zeh-Ro is, but we can assume that he is highly skilled in combat if he can defeat Damian Wayne.

Since most of the issue was punch and run, my favorite scene was in the park. I liked the exchange between Elainna, Dick, and Barbara. I believed that Dick really wants the best for his daughter, and at the same time, she wants to become her own person and follow her own wishes. I did find it interesting that Barbara, despite her criticisms of Bruce recruiting children, is supportive of Elainna becoming Batwoman. The difference here is that Elainna is a young woman in her twenties like Terry is at this time. She can make her own decisions, where a child the age of Matt is only concerned with the adventure and not at all thinking about the dangers of this life.

I liked the art in this issue. It really looked like it was raining and at the same time, the action could be easily visualized by the reader. This issue even included three splash pages. The first was the initial scene of Batman fighting the Slamjackers in the beginning. The second splash page was the reveal of the Batsuite. I particularly liked the detail. We see a car on a pad, a Harvey Dent for mayor poster, and what definitely is the replacement of the giant dinosaur, a giant mechanical penguin. We even can see what could be the Tumbler Batmobile from the Dark Knight film trilogy. We also see glass cases, which contain only batsuits, and what I presume is a Batgirl costume next to it. The last page is the scene of Batman finding Damian’s body. The one complaint is it definitely looks like Damian is unconscious, but I would have liked to have seen some blood added showing how injured he really is.

Final Thoughts: It is hard to rate the story, but the art does make this an enjoyable read. I am interested to see where this is going. I would like to see more Batwoman and more of a partnership between Terry and Elainna that I hope does not become a love interest for the two characters.