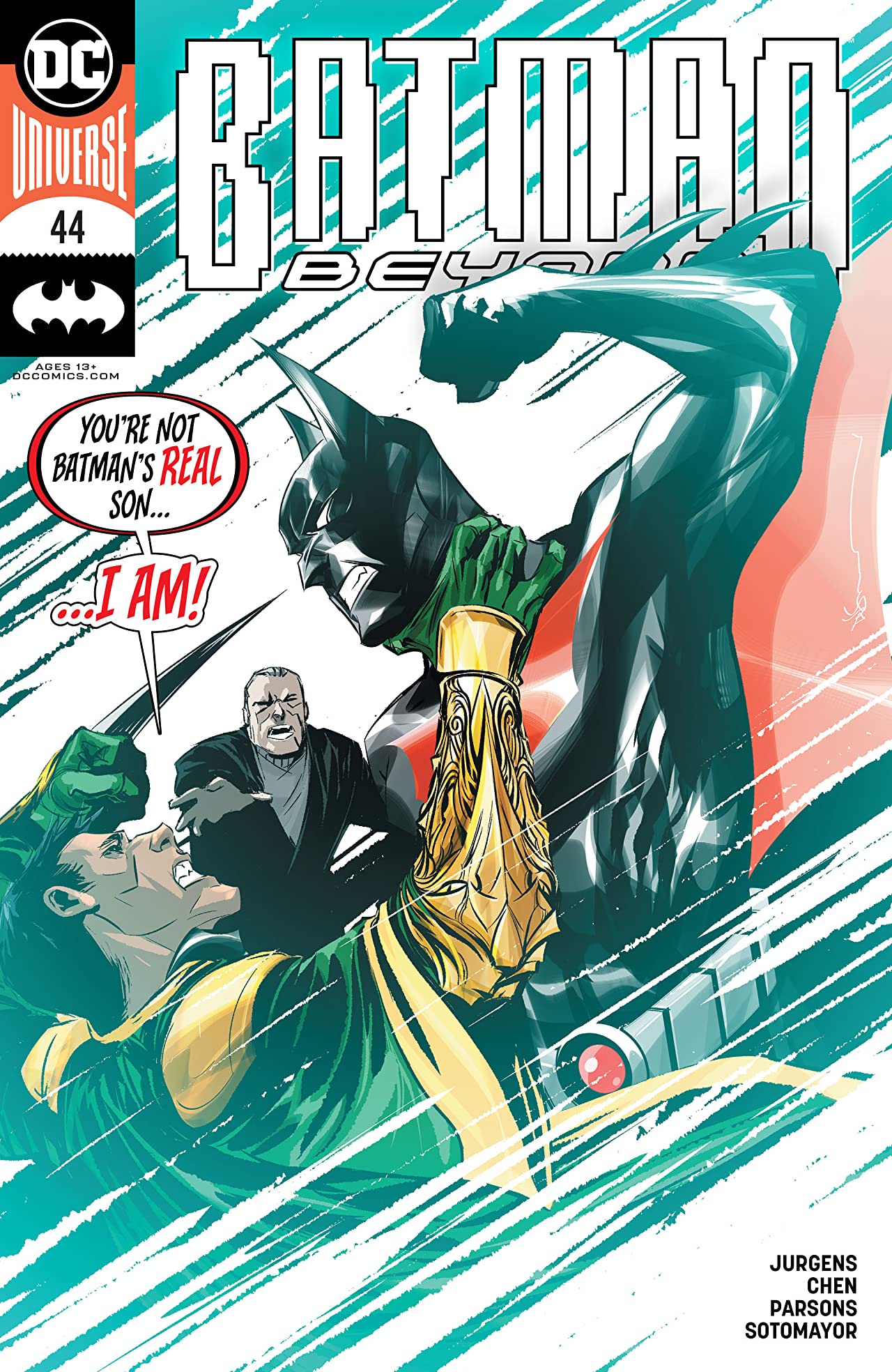 Overview: Batman gets Damian to safety, and we learn what Zeh-Ro’s plans are. Elaina continues her journey to become the new Batwoman.

Synopsis (spoilers ahead): “The Eradication Agenda Part Two” opens in the Himalayas. Zeh-Ro is telling his followers that the fraudulent one has been deposed, but this fraudulent one must die. The League’s best are on their way to kill Damian Wayne.

In Gotham, Batman and Goliath are taking to the skies with the unconscious Damian. Batman is heading for the hospital, but Bruce has other ideas. He wants them to bring Damian to the Batsuite, so he can be placed in the recovery pod. It will diagnose and treat Damian. Batman and Goliath change direction, Bruce suddenly picks up that the assassins on their way. As Bruce warns Terry, they attack.  Terry asks Goliath to get Damian to safety, but Goliath does not know the way to the Batsuite.

At Wayne Manor, Elaina, Barbara, and Dick enter the Batcave. The three find whatever it is that they are looking for, and Dick takes the controls. Something rises, but we do not know what it is yet.

Meanwhile, the fight over Gotham continues, and Bruce activates the cannon pods on top of his building. The cannons knock the assassins out, giving Batman and Goliath the opening to get to the Batsuite. The two fly through the hologram barrier and arrive in the Batsuite.

Damian is put into the recovery tank. Bruce can tell that the internal injuries are minimal. The fluid in the tank consists of a couple of key components for Ra’s al Ghul’s Lazarus Pit. Once immersed, the subject often wakes in a rage. Damian’s hand grabs Batman’s throat. Batman does not want to fight. Bruce talks Damian down, and the two hug after Bruce says that Damian is home.

Damian then tells Bruce and Terry that Zeh-Ro or Mr. Zero was a sworn lieutenant to al Ghul. He overthrew Damian because he wants to implement al Ghul’s more extreme ideas. He wants to leave the Earth devoid of life. The plan is that Zeh-Ro and his people will leave the planet, so the world can be repaired. The Himalayan retreat is actually a launch platform, which will carry the League to space. It will be from space that they will launch a new ice age.

Analysis: The main point of this issue was to get Damian to safety, so he could tell Batman what Zeh-Ro’s plans are. We also got to see some of the defenses Bruce installed in his tower. There really is not much more to the story, but there are some teases.

We are mainly teased by what Dick, Barbara, and Elaina are after in the Batcave. My guess is that it is a new costume. Elaina, up to now, has been wearing a Batman suit, and I am looking forward to seeing her own look. Dick still has reservations about Elaina’s crime-fighting, but Barbara is supportive, so we’ll see if she can talk Dick into supporting Elaina as Batwoman.

The art here is very good.  I particularly liked the art in the Himalayas as the artist really makes it look snowy and cold. We also see some more Easter eggs in the Batsuite, as the Batwing is on full display on the ceiling. I did feel that the face shot of Elaina when she sees the “suit” is a little off, but it is a small, cut-in panel.

The fight was good, and it was good to see Terry actually trying to develop a plan instead of just punching and flying.  Terry also did not appear as ruthless in this fight as he did in the previous issue. I would like to examine that character trait of Terry some more.

Final Thoughts: I enjoyed this issue, but it is still a set up for a story that hasn’t truly begun.