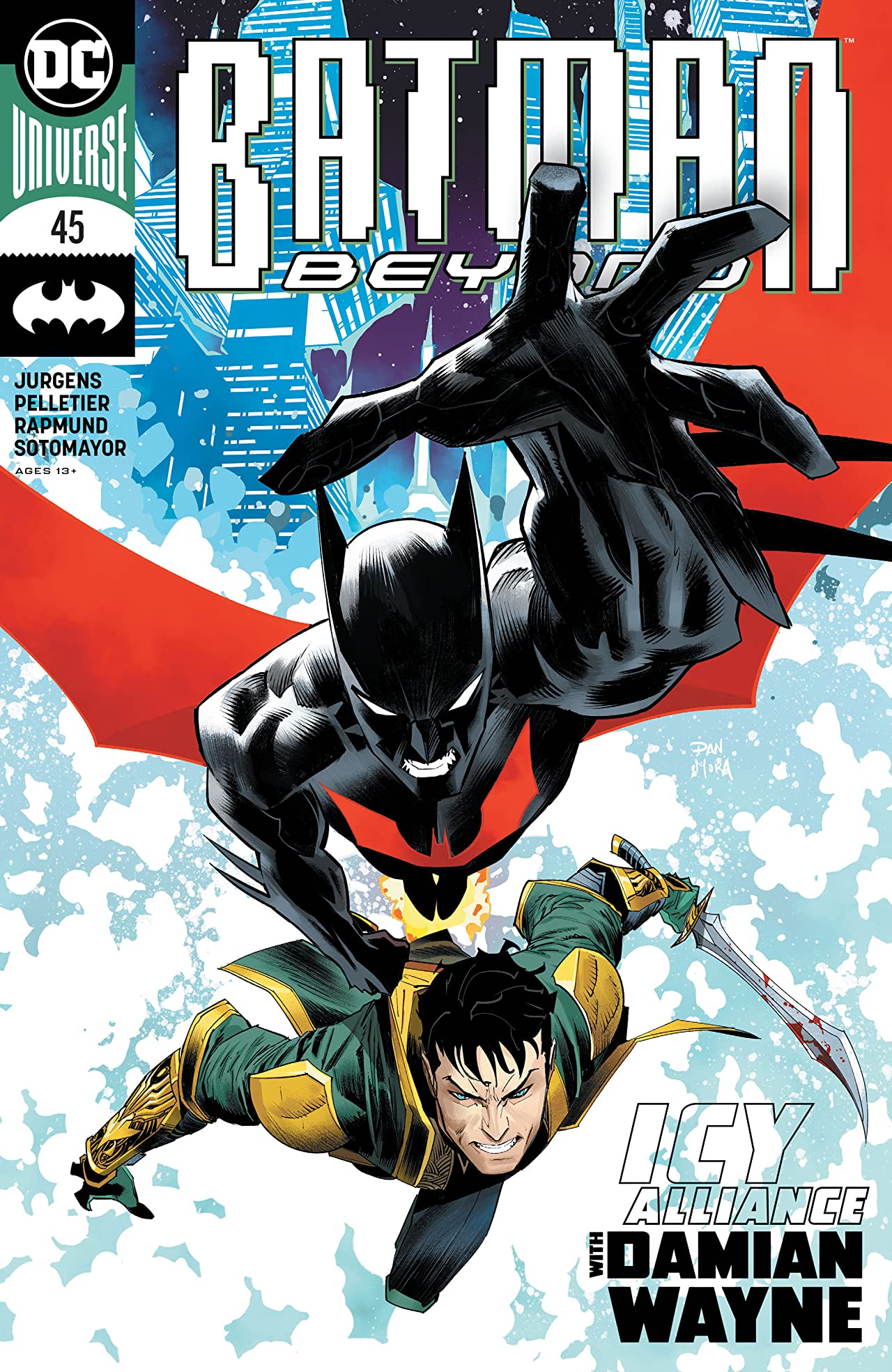 Overview: Batman, Batwoman, and Damian Wayne thwart an attempt by the League of Assassins to destroy Gotham City.

Synopsis (spoilers ahead): This issue starts with Damian Wayne catching the characters up to date on the League of Assassins. We see a conversation between Damian and an aged Ra’s al Ghul. Damian recounts the day, ten years prior, that the Demon shared his plan with Damian. The two debate over the state of the world and whether or not the world can be redeemed. They’re interrupted by Zeh-Ro. Zeh-Ro shares his perfect solution of launching the League into space while Earth is destroyed by a new ice age. Ra’s reminds Damian that they will not be affected by the years in space, thanks to the Lazarus Pit. However, it will not be available for Ra’s. After Ra’s body dies, he will not be able to be revived by the Lazarus Pit.  Zeh-Ro asks if he will be given the resources to speed his research into the plan. Ra’s agrees with the belief that Damian will rule over the new world.

Five years later, Ra’s dies and Zeh-Ro asks Damian if they shall build the star cruisers. Damian gives him permission to start construction. Damian was hoping to buy time to stop the plan, but about a year ago (in the pages of Batman Beyond #11) Zeh-Ro confronted Damian about ending Zeh-Ro’s work.  Damian told him then that he changed his mind. Zeh-Ro declares that Damian betrayed his grandfather; that betrayal will carry a high price. Damian thought he still had time until Zeh-Ro would complete his project, but Damian was wrong. The assassins killed Damian’s bodyguard and attacked him. Damian fought back, but he was overwhelmed. He would have died if not for Goliath.

Back at the Batsuite, Damian finishes his story to Bruce, Terry, and Matt. Their discussion is interrupted by a loud noise. We get a splash page of a giant ship in the skies of Gotham. It looks like the assassins have stopped looking for Damian and now changed their focus to destroying the city. Batman and Damian move to stop the attack. Goliath joins the fight, and with his power and size, it evens the odds. Damian and Batman knock out the ship’s cannons until the assassins deploy sonic weapons that incapacitates the three of them.

Batwoman arrives in her new suit.  Her suit is able to block the sonics, and she takes out the sonic emitter.  Batwoman explains that her suit was originally made for Nightwing, and she figured it might as well stay in the family. Dick Grayson also joins the fight. Batwoman tells Terry that Dick is on board the ship with her.

Bruce realizes that they need more firepower to stop the destruction of the city. He activates the WayneTech satellite. Batman attacks the bridge in hopes of stopping the attack, but Bruce tells him that it will not work. Bruce uses the satellite to attack the ship’s propulsion system, knocking out the ship. The team evacuates, and the ship’s momentum will take it out to sea, saving the city from the crash.

Though the attack has been stopped, the weather has changed. Where it was raining, it is now a blizzard at a time of year that it should be impossible for the change in precipitation. Bruce moves the satellite over the Himalayas and finds that the top of the mountain was blown off, revealing a launchpad filled with space transports.  Zeh-Ro’s plan has started.

Analysis: The main focus of this issue is to catch the reader up on what was going on with the League of Assassins.  As a result I feel that this was mainly a filler issue. We see the relationship between Zeh-Ro and Ra’s, and Zeh-Ro is portrayed as a zealot that really feels betrayed by Damian’s halting of his plan.

The best part of the issue was the fight to save Gotham.  The art really shows the change in the weather well, and I enjoyed the debut of the new Batwoman. I really like the suit. The blue on black is very striking.  Her mask does not have an open mouth, and I like that as a way to distinguish her suit from Batman’s. I also like that they kept the long red hair coming out of the mask, even though that is not Elaina’s hair. It really helps with the secret identity and is a great callback to the 60’s Batman TV series where Barbara Gordon had short black hair but her mask included the long red hair.

Final Thoughts: I am looking forward to the future issues in this arc, and I believe we have gotten past the exposition now. The fight in the end and the debut of Batwoman helped make this issue more enjoyable.