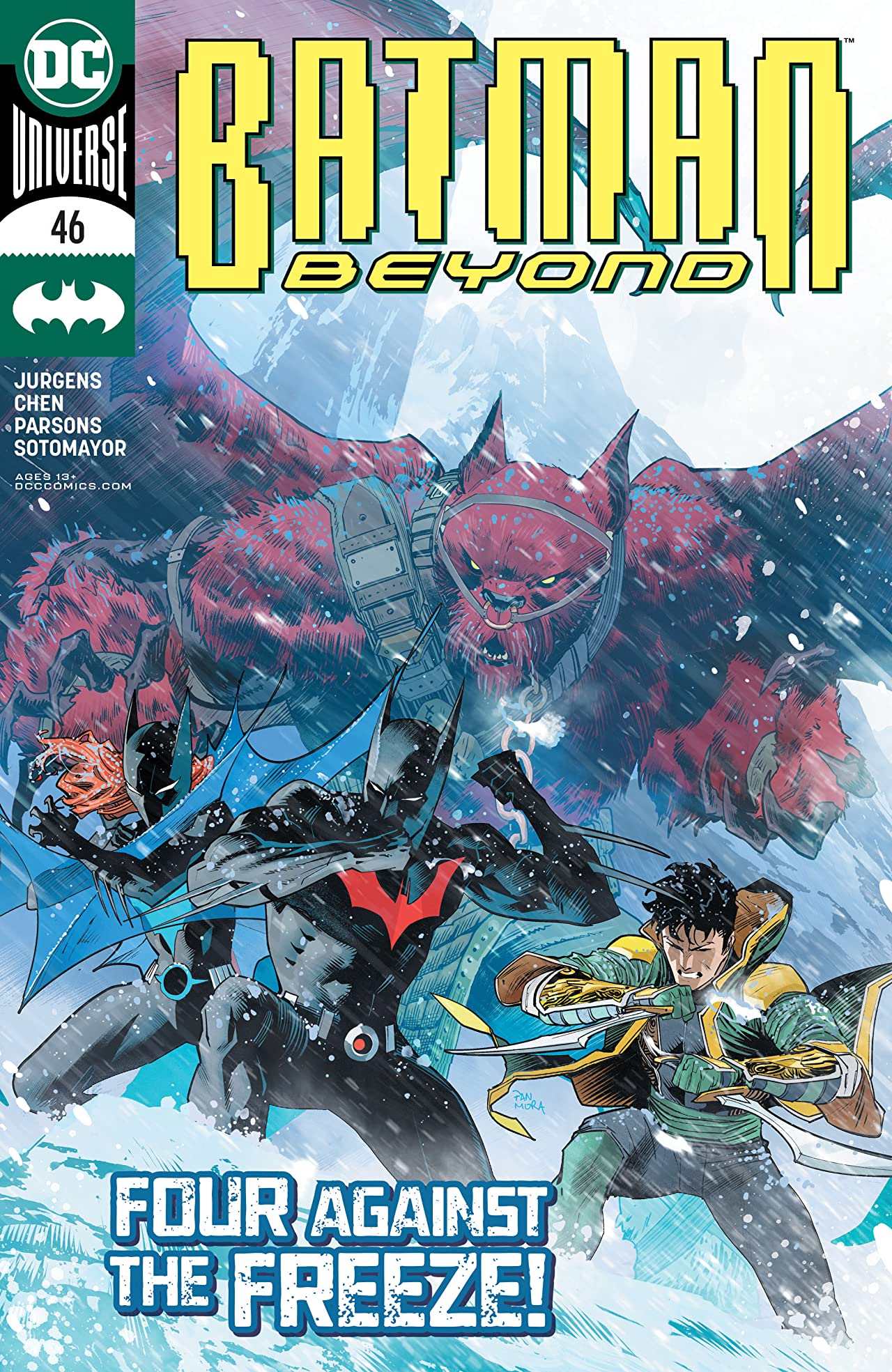 Overview: Half the team heads to space to deal with Zeh-Ro while the rest stays behind in Gotham to deal with the impending Ice Age.

Synopsis (spoilers ahead): “The Eradication Agenda Part Three” begins with the Batwing navigating the blizzard of all blizzards.  We hear bickering from the crew.  Damian and Dick are arguing about Dick’s flying and who was the better Robin.  The crew consists of Batman, Batwoman, Dick Grayson, Damian Wayne, and Goliath.  Batwoman is defending her father to Damian and Batman just struggles with understanding why they are having this conversation when the world is about to be buried under ice.

We learn that the Batwing is over Texas but it looks like they are over the arctic.  They are just above their destination however they cannot find it when they land under the snow.  Batwoman locks in the coordinates and adds a little heat and they see the underground installation.  Damian uses his voice to open the latch and the five descend into the installation.  They find a space cruiser.  The plan is to go into space to stop the League.  Batwoman is in awe that they are going into space and Damian says that she seems intimidated.  Elainna returns that she is not.  Batman states that Ra’s al Ghul prepped for every contingency.  Damian reveals that the installation and the ship are in fact Bruce Wayne’s.

In Neo-Gotham, Bruce, Barbara, and Matt are monitoring the installation Batman and the others are in.  Bruce theorizes that Zeh-Ro has an orbiting platform and that it is deploying small satellites that are in essence forming a screen barrier to block the sun.  Suddenly all of Gotham finds itself in a power outage.  With the temperature being forty degrees below zero, people will die.

Batman, Batwoman, Damian, and Goliath are aboard the cruiser with Batman at the controls to Damian’s displeasure.  Dick will stay in the installation and monitor the mission from there.  The ship is interfaced with the Batsuit so only Batman can fly the ship.  They launch.   Soon they discover the platform and the satellites generating the screen.  The platform fires on the ship.  Batman takes the ship through invasive maneuvers and Damian says the war has begun and he hopes that Elainna is prepared.  She responds that she is prepared given the amount of combat she has seen.  The ship needs to dock with the platform but with the platform firing on them, Batwoman says that they need offensive capability.  Batman tells her that their suits were built to handle the depths of the ocean and that means they can handle space.  Bruce tells them that the suits will not sustain them for long.  Batman and Batwoman fire on the guns disabling them and allowing the ship to dock.  The four of them break through the airlock and enter the station to be greeted by the League of Assassins.  The Bat team engages the League.  Damian starts to go for the kill but Batman tells him not to kill.  Damian thinks Terry is being naïve.  They are engaging the most lethal force ever assembled.  Batman throws gas spheres which nocks the fighters out.  Elainna says that even in war there is room for humanity and Bruce would agree with that.  Damian muses that Bruce has more pressing concerns since they have not heard from him recently.

Bruce does have more pressing concerns with the power outage.  The generator is frozen solid and will not start.  Matt gets the coats and the three put them on just when the backup batteries fail, allowing the screens to go down in essence exposing the Batsuite to the blizzard outside.

Back on the platform, the four Bat team members move through the corridors taking out what little resistance but the platform does have a capacity of 1100 people.  The three enter a room and the door closes.  Damian does not recognize the chamber in the plans Zeh-Ro presented.  A hologram of Zeh-Ro appears and says that he did not show Damian everything. He knew Damian would attempt to gain control of the ship and he could possibly succeed so he built a place that will ensure his failure.  The air is forced out of the room disabling the four and threatening to suffocate them.

Things look dire for Bruce, Barbara, and Matt as they appear to be unconscious and are quickly being buried in the snow. Next issue Death Stars.

Analysis: This issue reveals the plan to stop Zeh-Ro.  It is basically to take the fight to Zeh-Ro in space.  I did find the bickering between Dick and Damian and Elainna’s comments to be a little annoying.  I guess I agree with Batman on that issue.

I did find it interesting that Elainna mentioned combat experience.  We really do not know much about her other than she is Dick’s daughter and Barbara has a relationship with her as well.  It makes sense that she has this experience given her success at replacing Batman by herself when she took up the mantle while Terry had amnesia.  I do wonder what type of experience she has.

I do have a little complaint about the lettering.  Several times Zeh-Ro is spelled as Zero in Matt’s and Terry’s conversations about him.  When Damian mentions him it is spelled as Zeh-Ro.  I do not know if this a mistake or a way of mocking Zeh-Ro’s name.  Either way, I am not that impressed.

The art here looks really good.  It really looks like the world is experiencing an ice age with the snow and the wind lines that make me shiver when I look at it.  It really looks cold.  I do have a little complaint about how Damian is depicted.  He either has stubble or he is clean-shaven.

Final Thoughts: A little too much bickering but the fighting was exciting and the cliff hanger makes the reader want to see what happens next issue.  At least it does with me.