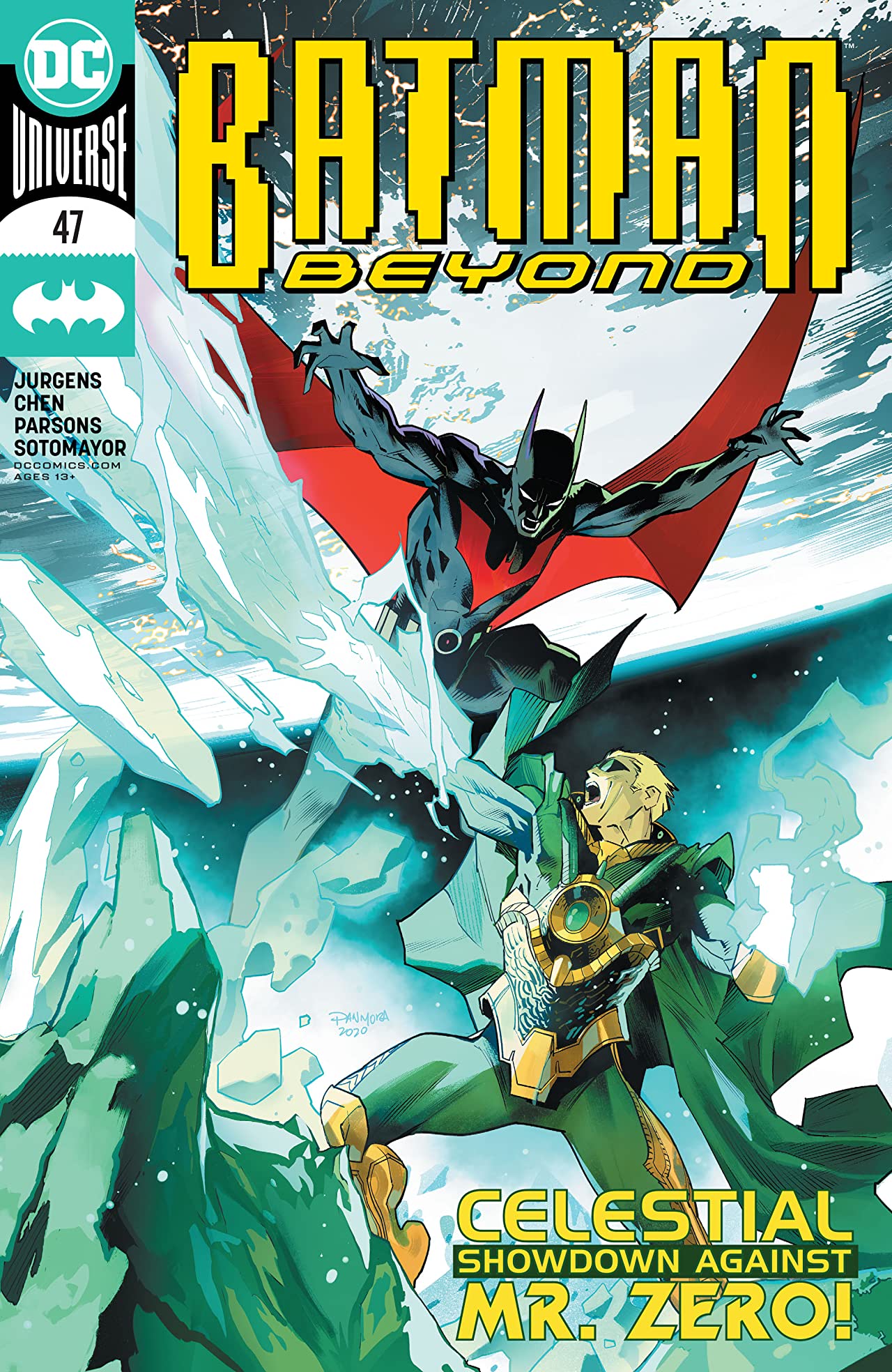 Synopsis (spoilers ahead): Batman, Batwoman, Goliath, and Damian Wayne are sucked out of the airlock of the League of Assassins space platform. Batman’s oxygen supply is gone. Goliath has blocked the vacuum’s pull, preventing Damian, Batwoman and himself from being fully sucked out. Batman orders them to seal the door. Since the controls are offline, Batwoman attempts to access the wiring. Goliath starts to lose his grip, and Batman tries to rocket back to the airlock. Damian grabs the wires to complete the circuit causing the door to slowly close. Batman is too far out and he reaches out. Goliath catches Batman’s hand and throws Batman into the platform as the doors seal.

In Gotham, the situation is dire. The current temperature has dropped to sixty degrees below zero, making human life unsustainable. Bruce is able to dig out from the debris, dragging Matt’s limp body. Bruce hears his name; Barbara Gordon has found the Batmobile and started it up. Bruce carries Matt inside the cockpit and says that he will be fine thanks to the cockpit’s warmth. Barbara takes the controls and flies out to survey the situation. The entire city has lost power, and at the rate of the temperature drop, everyone in Gotham will be dead within hours along with everyone else on earth.

On the bridge of the platform, Zeh-Ro surveys his work. Soon he finds that Batman, Damian and Goliath have made it to the bridge. The assassins attack believing that they have superior numbers. The three heroes immediately engage. The heroes move in to take control of the station, provided that Dick Grayson comes through. Bruce had weaponized his communication satellites. Dick takes control and fires on some of Zeh-Ro’s satellites. Dick cannot take them all out.

Damian moves to engage Zeh-Ro. The villain pulls a firearm and fires at Damian as Damian leaps over him to the control panels. Batman tackles Zeh-Ro from behind, and Goliath takes out the assassins. Batwoman is outside and taking out more spheres.  The plan is to take out a few that will cause a chain reaction, destroying all the spheres which will put a hole in the screen. Damian, using his grandfather’s override codes, can keep it going. Batman continues his fight with Zeh-Ro, disarming the villain and pushing him into the display screen.

Dick reports that the explosions are getting closer to the platform. Batman, Damian, and Goliath move to evacuate the platform. Batwoman’s job is to clear the airlock, allowing for a quick escape to their ship. Batwoman has cleared the airlock, and the team boards the ship and flies off. The platform begins is blown out of orbit into deep space.  It will live its own ice age in the darkness of space.

The next morning everyone is assembled in the Bat Suite. Power has been restored, and the snow has started melting. Their cloaking tech is also operational. Bruce tells them that the life support systems of the platform are still operational, but it is drifting deeper into space.

The scene shifts to a man in shadow next to a flying device. The man wonders why there is so much snow in the summer. It’s Booster Gold and Skeets; they have a job to do, and if they fail, the future will change, meaning Batman will never exist.

Analysis: This issue is the final issue of the arc. Not much happens on earth, as most of the action is in space and mainly on the space platform. There are some quips that the characters share with each other during the fight, which lightens the gravity of the situation.

The art is good, though there is not much special about it. I do like page eight, which shows Bruce and Barbara in the Batmobile surveying the damage. I like the design of Barbara here better than the animated series. I like that they kept her red hair while aging her (but not too much). Bruce is also not aged as much as he appeared in the series. I also like Dick Grayson’s design. I like the beard and the white hair at his temples.

There really is not much here other than a large fight that is satisfying as it shows a plan to their action and not just punching. I am not sure where this is going to go with Booster Gold. That character is not one of my favorites, so I will wait and see what happens in the next arc.

Final Thoughts: It’s a good ending to the “Mister Zero” arc, but this isn’t really a wow issue in terms of character/story progression.