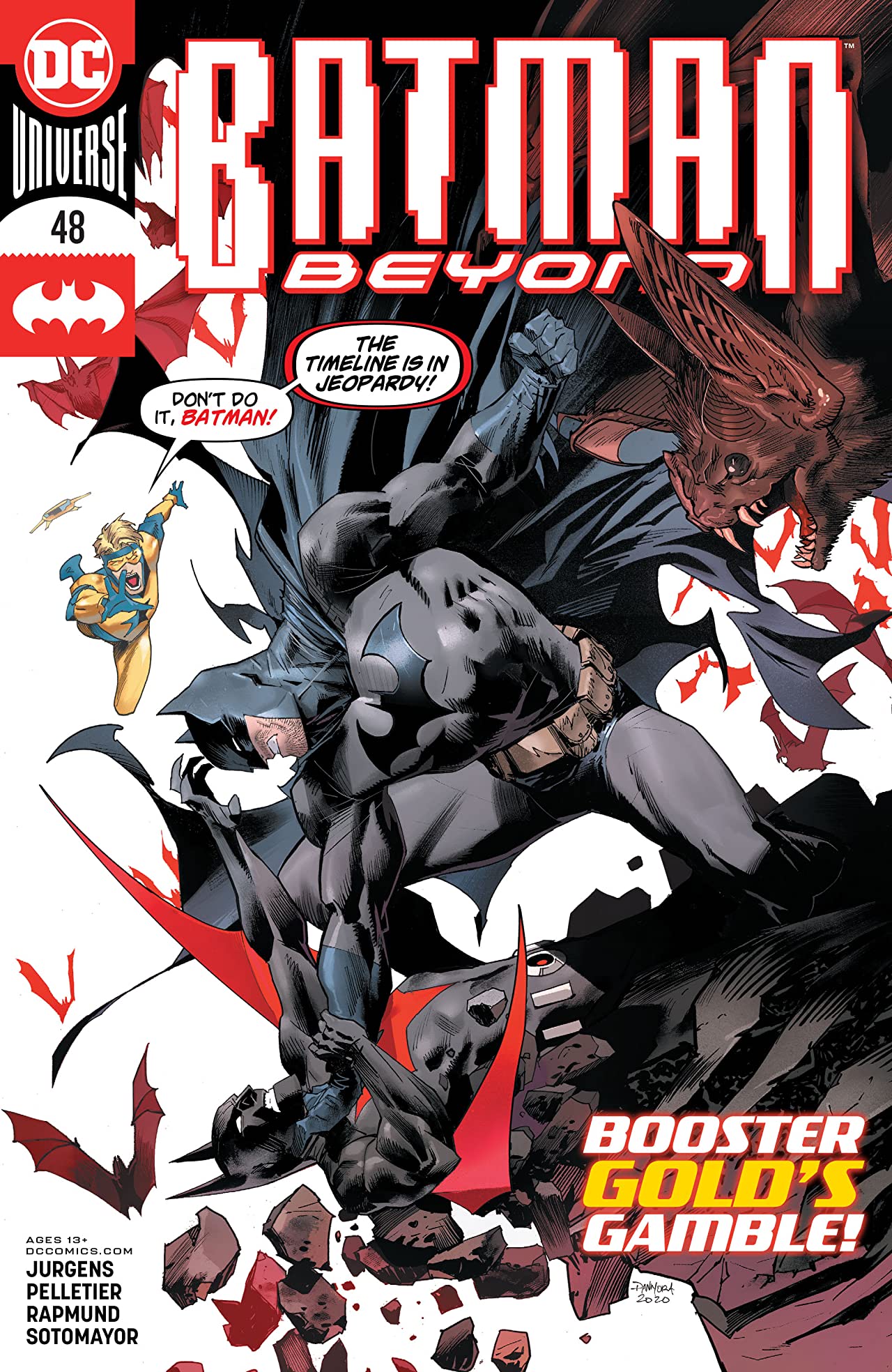 Overview: Booster Gold arrives to drag a reluctant Batman to the past in order to save Bruce Wayne’s future.

Synopsis (spoilers ahead): Decades from now, Batman is flying back to the Bat-Suite. Batman lands as Matt fills us in on what has been happening. Batman has been fighting a group known as the Twilight Rangers. This night, Terry took out thirteen of them. Bruce is sitting at his computer with an intense look in his eyes. Terry takes off his mask and asks Bruce if he had gotten all the rangers.

Bruce turns around, demanding that Terry tell Bruce why he hates him and why is here to attack him. Matt and Terry are shocked.  Bruce tells the two that they are there to kill him. Terry tries to reason with Bruce, but Bruce activates the defense protocols with orders to shoot to kill.  Defense drones streak out and attack both Matt and Terry.  Bruce tells the two that tougher punks than them have tried to kill him and activates more drones. Bruce orders the drones to blow Terry’s head off, and we hear another person in the suite. The voice belongs to Booster Gold. Booster jumps in between Terry and the drone. Batman does not recognize Booster. Booster grabs Terry and flies out of the suite with him.

The drones pursue them outside, and Booster takes them out with his blasters. He tells Terry who has replaced his mask that he is a time traveler from the twenty-fifth century. He talks about becoming a hero in the twenty-first century.  Batman remembers seeing old commercials and realizes that it was Booster Gold in those commercials. Booster tells Batman that his search for funding was all a cover for his real job, which is protecting the time stream. Batman tells Booster that it is his job to find out what is wrong with Bruce.  Booster tells him that he can tell him exactly what happened to Bruce Wayne.

Booster tells Batman that today’s events were keyed decades ago when Bruce Wayne was still Batman.  Bruce was infected with a post-hypnotic suggestion that just got triggered. One of his past enemies planted a seed that popped.  Bruce did not know that it was there. Batman wants to get back to get Matt out of there, but Booster tells Terry that Matt is gone. Batman punches Booster in the face and flies off. Booster Gold calls Skeets, and the Time Sphere materializes in front of Batman. Booster then tackles Batman into the sphere, and Skeets starts calculating the chronal formula for a time jump. Booster tells Batman that he has to go with him into the past to Gotham City of 2020. Batman believes that Booster is conning him, and Skeets assures Batman that despite his faults, Booster is not conning him.

Batman grabs Skeets and asks him what he is. Skeets calls himself a technical advisor and spiritual guide to Booster. Batman tells Skeets to take him back, but Skeets says that would result in Matt’s permanent death.  Booster tries to reason with Batman, and Batman punches him again. Skeets then says that he identified the irregularity in Bruce’s brain that dates back to the day they are now in. It is their job to make sure that the present Batman doesn’t get infected and then Matt would never have been killed. The two hear an explosion.

They take off in the direction and find several houses engulfed in flames. Booster knew that this would happen; it was this event that brought Batman (Bruce) to have his brain infected. Terry realizes that he may see the young Bruce Wayne as Batman. Booster tells him that he has to keep the two Batmen separated or else the timeline could be affected. Now, the two fly off to rescue the civilians in the burning homes. Booster Gold finds a mother and her son, and she recognizes him. Booster is upset that Skeets was not there to record the rescue. Batman (Terry) and Booster meet up, but they are interrupted by a character that says that they are interfering with his art. The adversary recognizes Booster but not Terry. Terry can hear the adversary in his mind. Booster tells him that they are dealing with a telepath. He is interrupted by Blanque, who identifies himself and then throws a house at them.  Booster tells Terry to clear the houses while he fights off Blanque. Skeets reminds Booster that the present Batman is on his way and they need to reach him before Blanque does. Blanque realizes that Booster is a time traveler and throws him into one of the burning houses. Booster finds a boy there, and that boy is grabbed by Terry. The boy, thinking that Terry is the Batman of his time, identifies himself as Warren McGinnis, who would become Terry’s father.

Warren realizes that Batman is surprised and asks him what is with the red wings. He thinks they are cooler than the cape. We see another person running up to them. It is this time’s Batman, and he demands that Terry lets the boy go.

Analysis: I had my doubts about this story when I read the last page of the previous issue. I am not a fan of Booster Gold. I do not like his costume or his character. This issue was surprising to me. It makes sense to have Booster in this arc as it does center on time travel and what had happened in the past. With that said, I am a fan of time travel stories. They have a built-in conflict with preserving the past and fighting to change an event in the future. We, as the readers, are surprised to see Bruce without provocation turn violently on Terry and Matt. It’s so violent that Matt is killed by Bruce off-panel. Whatever happened in the past has to be huge to create this type of scenario. In addition, there is the struggle of the two Batmen possibly meeting each other in the past, which will again change the future.

The story is good, but I am not sure about the art. Terry is drawn to look older than I believe him to be. It looks to me like Terry could be seen as in his late twenties, while I picture the character being in his early twenties. I did not like the ears on the past Batman’s cowl on the last page. They look shorter than I remember other artists drawing this era’s Batsuit.

I did like the detail in the old Bruce Wayne. When we first see him face-on, it looks like something is happening in his brain, and we do not know what that is until he accuses Matt and Terry of attempting to kill him. The intensity that is drawn in Bruce’s eyes is very clear. You can see that something is going on.