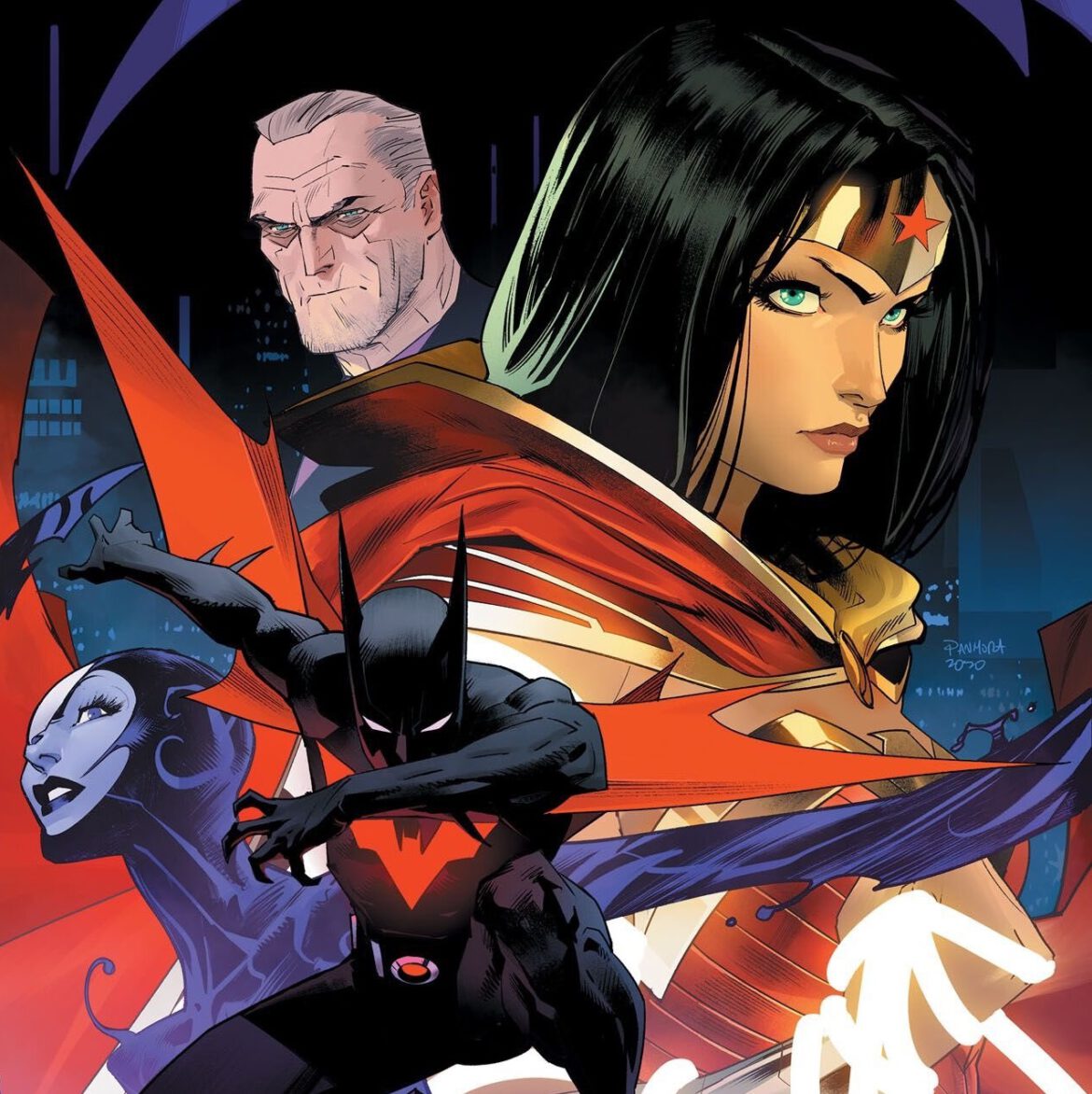 Overview: Bruce and Matt are hurt and Batman is to blame?  Wonder Woman surfaces to give Batman an offer.

Synopsis (spoilers ahead): The story, “Curtainfall,”  begins with a cloaked figure watching airport security footage from a monitor.  The figure is speaking with another which has a power ring.  The footage shows Batman speaking to airport security about a Wayne Enterprises crate he believes is part of a smuggling operation.  Suddenly Batman kills the officer by impaling him from behind.  It appears that the new young Batman is a killer.  It is decided that this cloaked figure needs to check this person out.

On cue, a police cruiser flies up.  Batman is wanted for questioning.  Batman does not have time for this, he rockets off with the police in pursuit.  It is serious because the police are willing to open fire immediately on the fleeing Batman.  Batman activates his cloak and disappears before the eyes of the police.

At the hospital, Terry runs in looking for Bruce Wayne.  He is directed to the emergency room where he finds Dana, Barbara Gordon, and Melanie, the former Ten.  Dana immediately tells Terry that Bruce and Matt were at Wayne Technologies when they were attacked by, according to the security footage, Batman.  Terry immediately realizes that is why the cops were looking for him.  Everyone in the room knows that Batman did not attack anyone but it is worse.  There is security footage showing Batman killing an airport security guard.  Terry is not concerned about that right now, he wants to find out about Bruce and Matt.  Again on cue, Matt walks in.  His arm is in a cast and sling indicating it is broken.  Terry hugs him as Matt tells him the story.  Someone dressed as Batman came into the lab at Wayne Enterprises looking for something then he turns on them.  He sent Matt flying with a backhand but Wayne stepped in.  Barbara says that the attack on Wayne Enterprises occurred shortly after the airport incident.  Wayne actually was not hurt in the attack, he suffered a heart attack.  The imposter then took a device and left.

Terry then turns to Dana.  He starts to tell her that it has been a long time since they last talked and then things were tense.  She interrupts him and says that they are good.  Terry tries to respond but she puts her finger on his lips and tells him that Bruce would like to see him.  Terry turns to go to the ICU to see Bruce.  The staff is prepping Bruce for an immediate heart transplant but the nurse leaves to give Terry some privacy.  Terry tries to find out who attacked but Bruce is only able to knock the glass of water off of the bed table.  The cloaked individual appears at the door thinking that Bruce knocking the water off was his way of trying to tell them something.  The woman reveals her cloak and reveals her identity as Wonder Woman.  She wants to check on an old friend and perhaps make a new one, identifying Terry with his name.  Terry realizes that Diana knows that he is the new Batman.  Terry immediately tells her that he is not responsible but Diana immediately tells him that Bruce’s behavior makes it clear that they are to trust him.  Terry questions that but Diana suggests that they find a more private place to talk.

The two take to the skies outside and Batman asks her what she meant by the term “we”.  Diana tells him that the “we” are her associates.  The associates are gratified that someone else took over the mantle of Batman.  The two land on the roof of a building and Diana assures Batman that Bruce is conditioned to fight.  But Batman says that no one lives forever, ironic that he says this to an Amazon who looks like she has never aged since her time with the Justice League.

In the operating room, the transplant begins.  Elsewhere, at Wayne-Tech R&D, Batman and Wonder Woman are looking for something specific.  Batman suggests that based on the footage makes it look like they are dealing with a shape-shifter, one composed of a black liquid.  Batman and Wonder Woman are then attacked by Inque.  She will not let Batman prevent her from saving herself.  Wonder Woman immediately asks for a briefing on their enemy.  Batman quickly relates her story and her power set, saying she can solidify into almost any form she wants, including as Inque herself demonstrates, Batman.  Wonder Woman immediately understands the security footage.  Inque says that Bruce Wayne would not have let her have what she needed to live.

In the surgery, Bruce flatlines.  Wonder Woman attacks Inque but she flows into the floor drain to escape.  Batman sees that Inque took the stabilizer cube and a power source.  The cube will be able to put any substance into a type of stasis.  Inque attacks the two heroes again and moves to smother Wonder Woman.  Batman goes for a fire hose as he gets a communication from Matt telling him that the surgery has gone bad.  Inque attacks Batman, water is not going to work on her again.  Barbara takes the phone and reports that the implant did not take.  Batman attempts to use sonics to get her into the cube.  Inque screams that she does not want to die.  Wonder Woman questions if Batman wants to kill her.  Batman only wants to allow her into the cube to buy someone time to find a way for her to live outside of the cube.  Inque goes into the cube.  Wonder Woman tells Batman that he could have just let her seep into the floor and die.  Batman tells her that it is not his style and even though she is a killer, she did not have to die herself.  Wonder Woman suggests that the two return to the hospital to check on Bruce.

The second implant was successful.  Bruce Wayne will survive.  Bruce asked Terry where is Inque.  He is told that she is trapped in the cube and Bruce will have plenty of time to research options for her.  Terry tells Bruce that an old friend of his gives him her best and she is outside now.  Bruce immediately knows it is Diana and it is about time he met her.  Now is a time for a new beginning for everyone.

Outside, Batman meets Wonder Woman.  She asks him if Bruce will be okay.  It will take more than a heart attack to do Bruce Wayne in.  She suggests the two go for a quick flight.  The associates were watching and they too want to meet the new Batman.  The Justice League is not complete without a Batman.  This is definitely not the end for Batman Beyond.

Analysis: This issue was interesting but I do not believe it was a great issue.

The story is just a simple story involving an easily solved mystery and a single battle scene.  It seems to me, that the point of this was for Diana to see the new Batman in action and thus see Terry’s character.  Basically, this was an audition for this Batman to join the Justice League.  Diana, herself in the fight, was not very effective at all.  She might have been killed if not for Batman which really in my opinion diminishes the character and power set of Wonder Woman.

The reveal that the figure in the cloak was a failure because of the cover.  It is obvious that this beginning scene is in the Justice League’s headquarters, wherever that may be.  It is obvious to me that the cloaked figure is Wonder Woman and she is more than likely talking to a Green Lantern with the reference to the ring.

What is successful is the demonstration of the character of Terry McGinnis.  We see that Batman is not going for blood which is refreshing.  In some of the earlier issues, it seemed to be looking at an instability within Terry, making him a little more violent than even Bruce would like.  Here it is obvious that Terry is not that, as he demonstrates his love for family and his desire to not kill, even when dealing with killers himself.

The art here is good but not very exceptional.  Diana is drawn exactly as Diana would be drawn in her own book or the Justice League.  She really looks good in her old age.  My favorite panel in the book was the end of the Inque fight where we see her real face as she screams that she does not want to die.  I liked the detail on her face, as she looks terrified. I did not like how the frown lines on Dana’s forehead looks like a tattoo of some kind when we first see her.

This was a good issue, not a bad issue, but no real wow factor.  Batman Beyond ends with a murmur in my opinion.