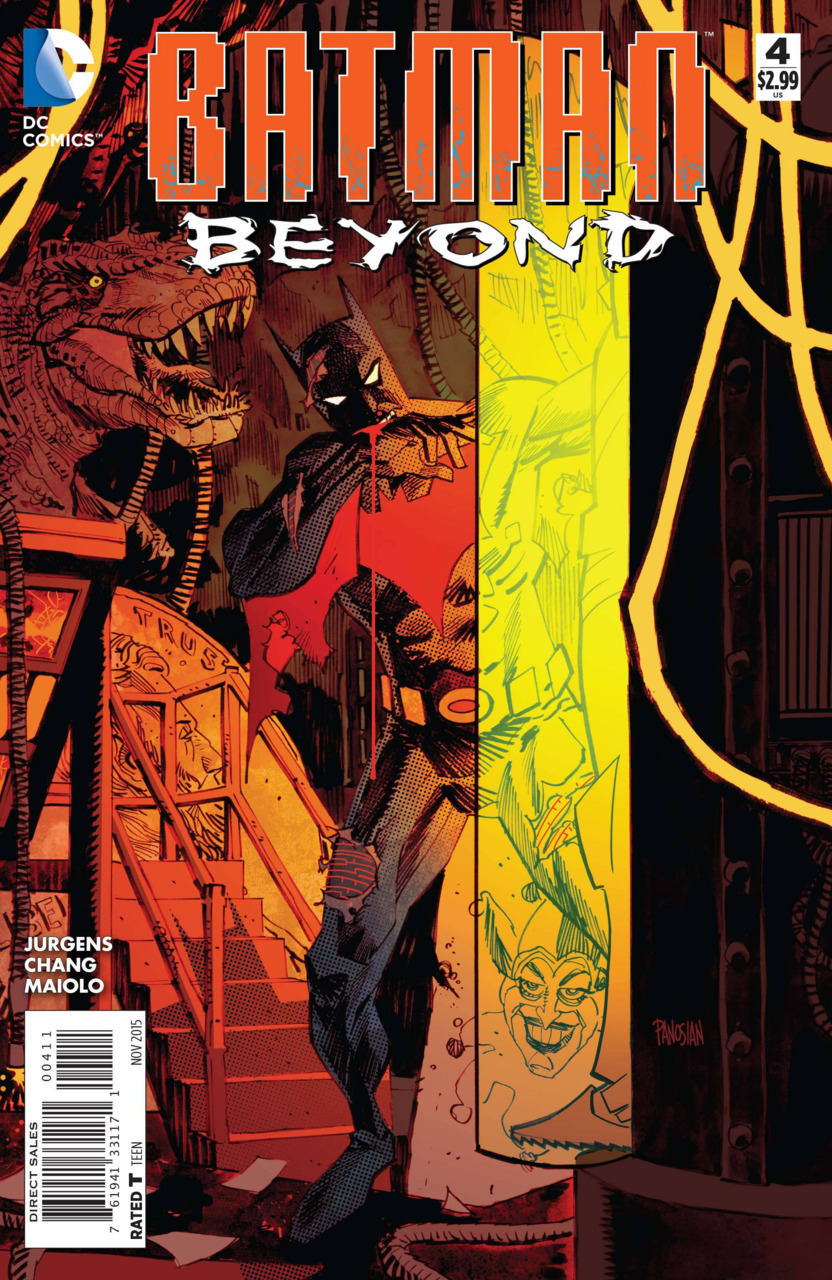 “Brave New Worlds Part 4” opens at Neo Gotham. Batman, Barbara, and Micron are on the roof looking at hordes of Brother Eye’s drones descend on the city. After a quick exchange where Micron learns that Batman is not Terry but the replacement for the dead Terry McGinnis, the battle starts up with Micron growing to match the horde of drones. The Gotham Police soon join the fight on the side of the heroes and the battle begins a la Man of Steel. While the battle continues, we see members of the Jokerz cheer on Brother Eye. Meanwhile, Batman laments that this battle and the possible loss of Gotham is his fault. Barbara assures Tim that it is not his fault and Gotham needs Batman. Barbara called in every cop in the city but she wants the Batman to take the point in this fight.

Presumably, the scene transitions to the moon where Brother Eye is taunting Deanna. All through the battle, the Jokerz are shown wanting to be processed as the drones start to process the populace of the city. This reminds me a lot of the Borg from Star Trek: The Next Generation. Batman strikes, saving a woman and her young baby. Batman is soon fired upon by the drones and he realizes that the drones are homing in on the AI, and orders A.L.F.R.E.D. to turn itself off. The AI cannot as Eye is overriding his own controls. Batman learns that his belt is housing the AI’s brain and is forced to destroy it himself. A large drone grabs Batman out of the air and prepares to process him in the field until a giant Micron crushes the huge drone, freeing Batman. Unfortunately, Micron is hit from behind and goes down.

Elsewhere in the city the police are being overrun by the drones. The Jokerz continue to taunt the cops and welcome the drones until one get clocked in the head with the butt of a rifle carried by Commissioner Barbara Gordon. She opens fire on the drones but is soon overcome only to be rescued by Inque. Inque declares that Gotham is her city also and if Eye takes it, there will be nothing left for anyone. Inque reveals to Barbra that Eye has her daughter and Batman promised to return her. Barbara leaves Inque to help the cops on the line while she goes in search of more fire power. Brother Eye on the moon watches Inque fight its drones and continues to mock Deanna. As punishment for her betrayal, Inque will be forced to watch the processing of her daughter.

Back at the hospital, the patients are being evacuated. Matt is feeling hopeless until one of the evacuators shows him that there are people giving their all to keep everyone safe. Matt specifically sees a feed showing Batman in the fight. We see outside the city the Justice League drones are preparing to attack as part of the second wave.

Micron and Batman continue to fight while the Jokerz look on. Batman is running out of weapons and a female Joker declares how great it is that the Eye is winning. She is brutally processed in front of Batman. Batman is quickly overrun by the drones including the Joker he was talking to earlier. But he is soon rescued by the Batmobile, with Barbara in the cockpit. Batman gets in and the two head to the only place where Batman can reload, the Batcave. Barbara is interested in equipping Tim with battle armor. Next issue, “Deception”

On the subject of Micron, he was not in this issue very much. He seemed to come in and disappear all the time. I do not think that this was part of the story but might have been some holes in the writing. For example the last time we see him is just before Barbara arrives in the Batmobile. He is there in the first panel and then we do not see him again, what happened to him while Batman was being overwhelmed prior to the arrival of Barbara?

I would like to see what the deal of the Jokerz are. Throughout the fights, we see them cheering Brother Eye on and they are the only group I see cheering on the advancement of the drones.

The final reveal of the battle suit would have been cool if the suit was actually the Thrasher armor we saw Bruce wear when the Talons attacked the Batcave. Instead it almost looks like the War Machine armor from Iron Man.