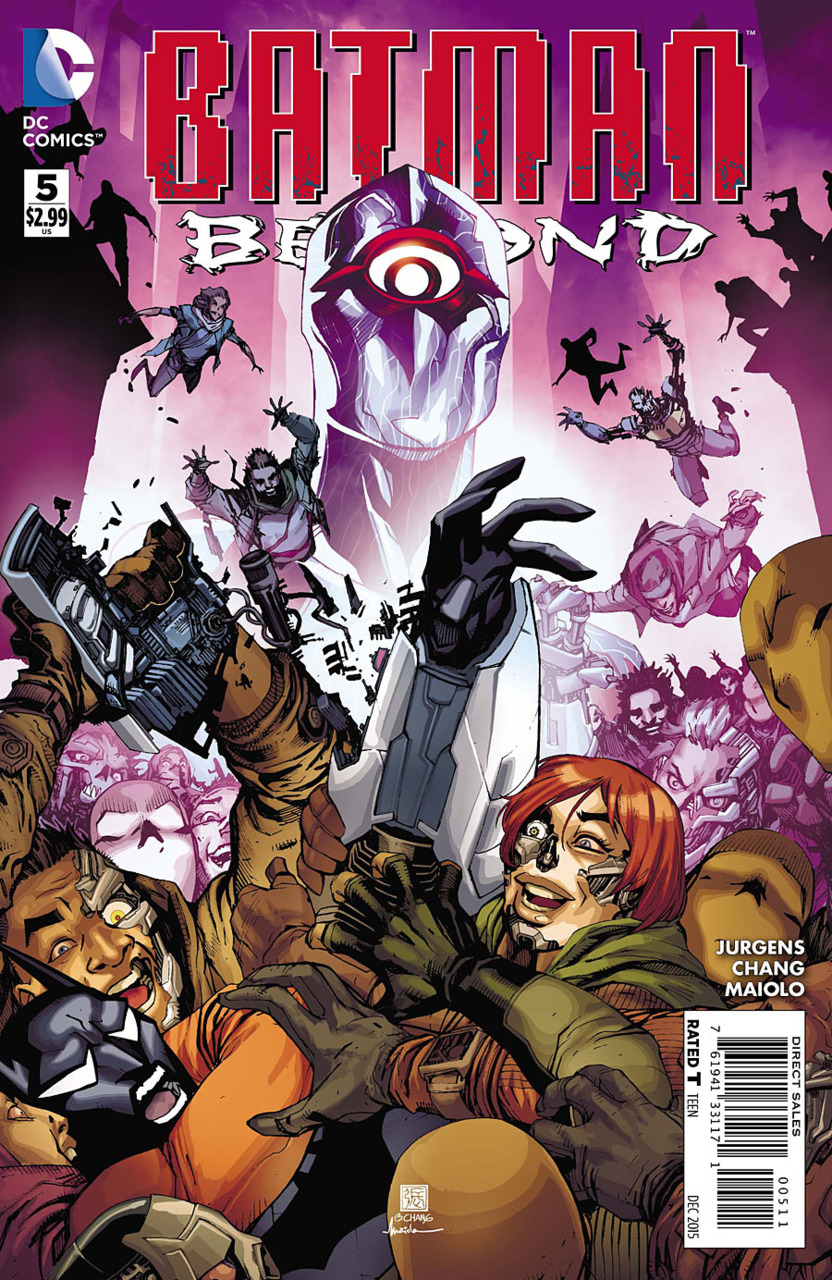 “Brave New Worlds Part 5” continues with the fight for Gotham. Brother Eye’s forces are decimating the police and military resistance but the humans are not giving up. Back in the Batcave, Tim and Barbara are starting to work on the Bat armor. Barbara has run systems checks and recharged the suit’s batteries, she has also disabled the suit’s external communications to keep Brother Eye out of the control systems. The two banter about Dick’s feelings for Barbara and Tim’s ultimate decision to leave Batman and join the Teen Titans. Tim enters the suit and the suit starts to conform to Tim’s build. In the end though, Tim thought he would be the last to become Batman as the suit conforms to Tim and all systems are live. Before the suit is ready to go out, Barbara activates the camouflage tech and changes the appearance of the suit to match the Batman Beyond look. Barbara does this so the Eye will know who he is dealing with.

On the moon, Brother Eye watches the battle of Gotham. His only disappointment is that he cannot locate Tim Drake. Brother Eye knows that Tim damaged his position in the past causing Eye to lose his “more desirable future”. As vengeance, Eye wants to drag Tim Drake’s dead body along the streets of Gotham.

Back at the hospital, the evacuation faces resistance. Nora tries to get Max and Matt onto the evacuation crafts when one the crafts is destroyed by the Borg converted Green Lantern, John Stewart. Batman Beyond is immediately on the scene and engages the Green Lantern, destroying him. Matt runs off to verify that the attacking Batman is really Tim Drake. Batman meanwhile continues to press the attack, his plan is to make Eye thing that he is just reacting to him and not mounting an attack of his own. Batman’s renewed presence has given the cops, military and civilians fighting for their homes and lives renewed hope. We even see a panel showing a couple of the Batman Beyond villains fighting the Brother Eye forces. We also see that Micron is also still fighting the Borgs.

Batman is struck from behind, as the two big guns of Brother Eye have arrived, the Superman and Wonder Woman Borgs attack Batman. Micron sees the battle and shrinks down to enter the Wonder Woman systems destroying her from the inside out. Superman notices Micron as the only one who has eluded the Brother Eye. In response to the Superman, Tim ejects from the suit wearing a Kryptonite ring, he retrieved from the Batcave. Superman is weakened enough, allowing an enlarged Micron to crush him and Tim returns to the suit. Batman takes off from the victory and rendezvous with Barbara in the Batmobile and head to Last Chance Gulch. More specifically the two arrive at Wayne Manor. They are there searching for an item which they do find among artifacts of the Court of Owls. Hopefully it still works because if it does’t, there will be no tomorrow. Next issue will be the conclusion.

This issue can be classified as an action and fight issue. The main thrust here is the fight at the hospital which interestingly leads to the destruction of three of Brother Eye’s heavy hitters, Superman, Wonder Woman and a Green Lantern. I was both happy and sad at the same time. It was nice to see that the Green Lantern used here was John Stewart, my favorite Green Lantern but of course it was sad to see him destroyed but as Tim stated John Stewart was a hero but anything that was Stewart had died a long time ago. It was also good to see Micron back as he just vanished in the end of the last issue.

For the fan who likes character development like me there was a good character moment in the cave. It was refreshing to see Tim and Barbara banter back and forth about the past and working for Bruce as a Robin. Even though this is the far future the Tim Drake fan in me is still excited to finally see him take up his place as Batman. I do not even mind that he is using the Jim Gordon Batman armor. To me it makes sense for a trained member of the Bat family to take up the mantle of Batman and Tim whether or not he was ever considered a Robin not withstanding is a member of the Bat family.

This issue ends with the cliffhanger that may or may not have something to do with the Court of Owls. Could it be a Talon and if so how can Tim trust fighting side by side with a Talon? I guess I will have to wait a month to find out.

As usual Batman Beyond does not disappoint me.