In 1939 the comic book world was introduced to the costumed superhero known as the Bat-Man. Wealthy playboy, Bruce Wayne by day; masked crime fighter by night. His debut in Detective Comics #27 was a mere six pages and titled, “The Case of the Chemical Syndicate.” Originally created by Bob Kane and Bill Finger (uncredited), Batman’s early stories were very dark and sinister. Batman is not hesitant to kill and often does so with little remorse. As the character’s popularity grew, so did the stories. By that, I mean as the year goes on, the Batman tales become gradually longer. With the increase in length, more complex stories were able to be told and Batman’s world was expanded. Batman’s clash with Doctor Death in Detective Comics #29 became part-one of Batman’s first two-part story. His reappearance in Detective Comics #30 also made Doctor Death Batman’s first reoccurring villain.

Over the next few issues we see Batman go overseas, fighting crime outside of New York (that’s right…New York City, not Gotham). In his confrontation with the vampire known as the Monk (Detective Comics #31-23), we see Batman’s first “mystical” foe. We also get the first glimpse of a woman in Batman’s life in the form of his fiancee Julie Madison. By the end of 1939, the writers must have felt it was necessary to give the readers an idea of how Batman came to be, so in a short two-page flashback in Detective Comics #33, we witness the murder of young Bruce Wayne’s parents and see his vow to avenge their death by fighting crime.

Detective Comics #27: In his first appearance, the “Bat-Man” investigates the murder of the head of a large chemical company. The killer turns out to be a former business partner, and Bat-Man stops him and his assistant before they can strike again. At the end of the night, the Bat-Man returns home and it is revealed that he is none other than Commissioner Gordon’s young friend, Bruce Wayne!

Detective Comics #28: The Bat-Man thwarts a jewel heist, only to be accused of being the ringleader himself. After discovering the whereabouts of the gang of jewel thieves, Bat-Man crashes their meeting and subdues the criminals before dropping the leader off at the police station.

Detective Comics #29: Doctor Death sets a trap for the Bat-Man. After recovering from a bullet wound, Bat-Man tracks down Doctor Death and stops his evil plan to poison the city by setting him on fire.

Detective Comics #30: Doctor Death survived the fire and now begins to use his poison as a way to wield power over his targets. Bat-Man is able to stop a diamond burglar sent by Doctor Death, who unknowingly leads Bat-Man to the evil doctor whom he is able to subdue and bring to justice.

Detective Comics #31: Batman’s fiancee Julie Madison becomes hypnotized by the Monk. When she goes on a trip to Paris, Batman follows closely in his Bat-Gyro. Once there, Julie disappears and Batman searches the city for any trace of her, only to fall into the Monk’s trap. Batman is able to escape and goes on to rescue Julie, but he is not done with the Monk, as he is already planning revenge against the mysterious figure.

Detective Comics #32: In Hungaria, Julie is bitten by the vampiress Dalia. Batman captures Dalia, who agrees to lead him to the Monk. Once there, Dalia turns on Batman who is then thrown into a den of wolves. Once again, Batman is able to escape and he kills the vampire and his mistress with silver bullets.

Detective Comics #33: A flashback shows the death of young Bruce Wayne’s parents outside of a movie theater and his subsequent vow to avenge their death as the Batman. In the present, the Scarlet Horde led by Dr. Carl Kruger, causes terror in the streets of Manhattan. Batman learns that Kruger is creating some kind of death ray. Though his attempts to stop Kruger and his army fail the first two times, Batman is able to defeat the Scarlet Horde at the last moment before they are able to slaughter thousands of innocent people.

Detective Comics #34: Batman helps a woman and her faceless brother, who are both being targeted by the villain known as the Duc. Batman is captured by the Duc and is tied to a giant wheel as some sort of sadistic game. After another miraculous escape, Batman chases down the madman and narrowly escapes certain death as the Duc drives his car off of a large cliff.

Now without automatically saying how good this was simply because these are Batman’s first appearances, I’ll tell you straight up: These were really good. I’m not even looking at these stories with different standards like I do with most old comics, they were that good. There’s a reason that Batman became so popular early on and the fact that these initial stories hold up after so many years is an indication of the quality. The other aspect that surprised me was the tone of the stories. I must say that I knew these first few years of Batman are “pre-camp” and are a whole lot darker than the 50’s and 60’s, but I was still expecting it to be a little more lighthearted. 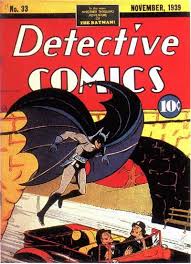 The moment I knew I was wrong was when Batman begins killing people. No, Batman is not causing people to die indirectly or letting someone be killed when he can save them, he is actually going around killing people. In fact, he’s even threatening bad guys with death. For example, in Detective Comics #29 when Batman so kindly declares to the criminals withholding information from him, “Tell me! Or I’ll kill you!” That’s pretty straightforward, and I’m pretty sure he means it too. I guess we learn early on that Batman is not one for small talk, but the point is that Batman kills (or attempts to kill) someone in nearly every one of these first issues, whether it be by snapping a neck, kicking into a vat of acid or throwing off a building. In fact, he even shoots the Monk with a gun (Wait, does he count? He IS a vampire). Later in Detective Comics #29 after setting Doctor Doom ablaze, Batman seems to relish his victory exclaiming, “Death…to Doctor Death!” Oh Batman, you’re so funny.

In these first eight appearances, we see a lot of different things that have stuck around with Batman for years and I’d say have even come to define him. First of all, the detective aspect is very evident here (though not gone into in depth because of the short stories), as well as the idea of Batman lurking in the shadows and picking off his prey. The utility belt with all of its gadgets is introduced in Detective Comics #29 and we even see batarangs in Detective Comics #31. The Bruce Wayne vs. Batman dynamic is not really touched upon very much except in Detective Comics #31, when danger hits close to home, but I would attribute that to the limited page count and would expect more when Batman receives his own book in 1940.

To be honest, these early Batman stories were a very pleasant surprise. Reading these for the first time, my expectations were that Batman would be a completely different character, maybe a prototype with only similarities to the character we see today. Not to say that there haven’t been changes over the years, but for the most part the Batman of today is not so dissimilar to Bob Kane and Bill Finger’s dark vigilante of 1939.