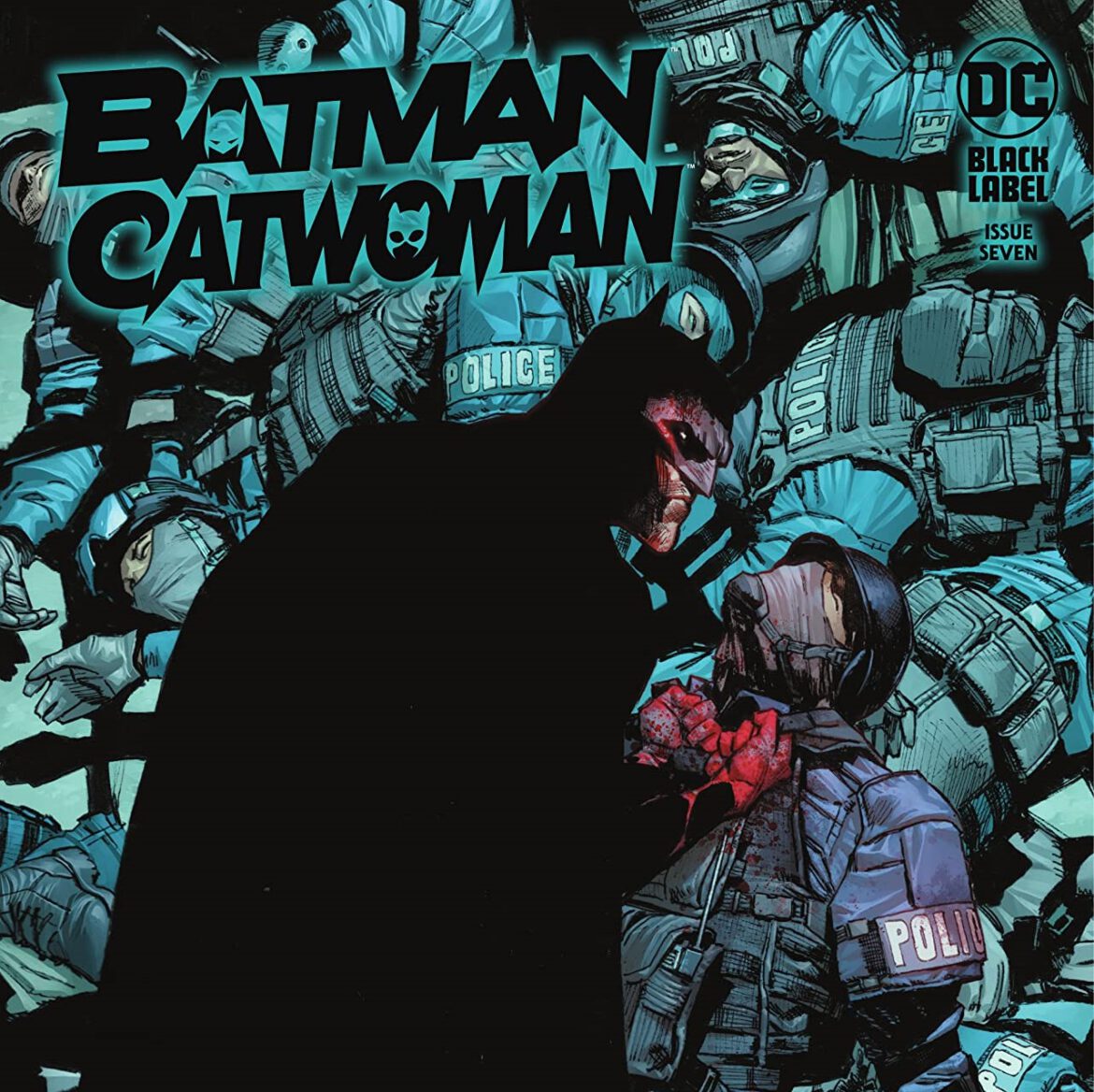 Overview: In Batman/Catwoman #7, Bruce Wayne awakens from being knocked out and makes his escape from a bank vault. Meanwhile, Selina Kyle is arrested by Commissioner Dick Grayson and Batwoman.

Synopsis (spoilers ahead): Batman/Catwoman #7 begins in the past, as Bruce Wayne and Selina Kyle make love while “O Come All Ye Faithful” plays. Bruce awakens from this vision in the present. He’s naked and locked in a vault in the Bank of Gotham, or so a note pinned to the wall tells him. It was written by Catwoman, and it informs Bruce that she and the Phantasm are going to kill Joker. Police sirens blare in the distance.

In the future, Commissioner Dick Grayson asks for a status update. One of his officers notes that there are snipers and National Guard waiting, as well as S.W.A.T. personnel scattered around Wayne Manor. Dick thanks the officer but notes that it’s not enough. He then rings the doorbell of Wayne Manor.

Selina Kyle answers, pretending to be surprised by Dick’s visit. Dick breaks the news that he’s come to arrest her for the murder of the Joker, then asks her how badly this is going to go.

Dick and Selina walk down the hill from Wayne Manor, and Selina tells a story of when she asked Batman why he made Robin wear the yellow costume. Dick tells her that it was because wearing black would allow him to hide, and the yellow made him rely on his skills and know his vulnerabilities. Selina then tells Dick that that’s not what Bruce told her, that it was to make the Joker laugh, so he wouldn’t kill Robin.

In the past, Bruce and Selina lie naked on a couch in Selina’s apartment. Bruce tells Selina that he knows the Joker was here. She skirts around it by telling a joke, one that Bruce already knows. Selina then swings back around to the Joker, telling Bruce that he’s a murderer, suggesting that Batman should take a different approach to Joker.

The police arrive at the Bank of Gotham, informing Bruce from outside the vault that they have the place surrounded. Bruce cuts his own forehead and smears his face with blood as the police prepare to bust the door open.

As Batman/Catwoman #7 continues in the future, Helena Wayne talks to one of her father’s old Bat-suits in the Batcave. She tells him that she turned over enough evidence to put Selina away for a long time. She feels guilty about it, but she presses on, asking the suit, a stand-in for her deceased father, why he would marry someone like Catwoman, especially since she’s so different from Bruce and Helena.

In the past, Selina tells Bruce that the Bat-signal has been lit. Bruce gets dressed and tries once more to ask Selina where the Joker is. She, once more, refuses to tell him.

Back in the present, one officer tells another that there’s carnage down near the vault. The police found a crazy man covered in blood, and he’s beating them all up. The first officer tells the other that he left because his shoulder has been injured. Once the second officer fixes the first one’s dislocated shoulder, it’s revealed that this was Bruce Wayne in disguise. He knocks out the officer and steals the ambulance in order to make his getaway.

In the past, Batman investigates yet another murder caused by the Joker. Commissioner Gordon is there, and he tells Batman that Joker stuffed a chimney full of Santas. There was a note, too. The note reads, “What does Santa feel going down the chimney? Claustrophobic.”

Gordon tells Batman that the Joker is some kind of devil sent down to punish everyone and that he has to be stopped — permanently.

In the present, Bruce arrives back at the Batcave, and Catwoman stumbles in, bleeding from her stomach. Bruce asks her how it happened, and Catwoman tells him that Joker whispered something to Phantasm. This led to Phantasm stopping for a second, then slicing Catwoman with her scythe. Phantasm dropped a smoke bomb, and after the smoke cleared, both Phantasm and Joker were gone.

In the future, Selina Kyle pulls a pin out from within her foot at the police station. She’s ready to make her escape.

Analysis: Liam Sharp takes over art duties in Batman/Catwoman #7. The style differs greatly from Clay Mann’s, who provided art previously, but there’s a darker, harder edge Sharp brings to Batman/Catwoman that works for this book. Sharp’s depictions of Selina Kyle and Bruce Wayne are more world-weary and exhausted. There are more lines in their faces and an intensity behind their eyes, especially Selina’s in the scene in which she’s brought into GCPD. Considering this issue finds our main characters separated and at their most distant from each other since this series began, it’s a grittier touch that emphasizes the moral gray that writer Tom King is playing within his story.

As far as the story goes, puzzle pieces are finally falling into place. Whatever happened between Catwoman and Joker that destroyed their relationship in the past and ultimately led to Selina murdering Joker in his retirement home, obviously has something to do with the Phantasm. Earlier issues would have led readers to believe it was directly connected to Joker having murdered Andrea’s son, but by the end of Batman/Catwoman #7, Catwoman suffers a wound from the Phantasm, after Joker whispers something in Phantasm’s ear. It’s unknown as to what Joker whispered, but this scene seems crucial to Catwoman’s evolution into how she finally resolves to do something about her former friend.

We’ve seen throughout flashbacks in this series that Catwoman often encouraged Batman to deal with Joker more permanently, though she wouldn’t directly involve herself. Like with everything in her life, she kept her involvement at arm’s length. She suggested ideas to Bruce, knowing full well that he had his code, and she would feel guilty about some of Joker’s crimes, which she would alert Batman to. That said, by the time Phantasm has come to town, something is clearly different, and this time, Selina even betrayed Batman by offering to help Phantasm kill Joker. That didn’t go well, and Selina suffered dearly for it. Not only is Selina wounded, but she locked Bruce in a bank vault, without clothes, and set off the alarm. She put her relationship, once again, in jeopardy, and she failed to accomplish the motive behind such a risk. Either the Joker is going to retaliate with something even more sinister than we’ve been seeing in the pages of Batman/Catwoman, which will negatively affect Batman, or Batman will have to do something out of character that may harm Phantasm or more permanently damage Joker in some way. Either way, we’ve been led to believe that something happens to Batman or changes within him that presses Catwoman to act — eventually.

In the next few issues, something is breaking — that’s a given. There are clues pointing in a couple of different directions, as evidenced by the events of Batman/Catwoman #7 and previous ones, as well as everyone around Batman trying to convince him to kill the Joker. In this issue, it’s Commissioner Gordon who tells Batman that something has to be done to keep Joker from murdering more people.

One interesting side note — it feels like we finally get a moment inside Helena Wayne’s mind. Much of this series has been so Catwoman-focused, and it’s nice to see more of the turmoil Helena must be feeling in having to turn in her own mother for the sake of upholding and honoring her father’s code of justice. Though fleeting and a small point in the overall events of this issue, it’s a welcome addition to the Bat-Family inner workings.

Also, this series thus far has been rife with sex scenes between Batman and Catwoman. When he’s not out solving crimes, either he’s in her bed or she in his. It feels gratuitous, especially since we don’t see much of Bruce’s view of this relationship in this series. It feels like these scenes could be better utilized as some kind of lure for Bruce, but at this juncture, it comes across as unemotional and mostly done for the sake of it being a Black Label book.

Batman/Catwoman #7 feels like it’s finally going somewhere, though as to where, we’re still in the dark. Liam Sharp takes over for art, and his style works well with Tom King’s more serious Bat-yarn.