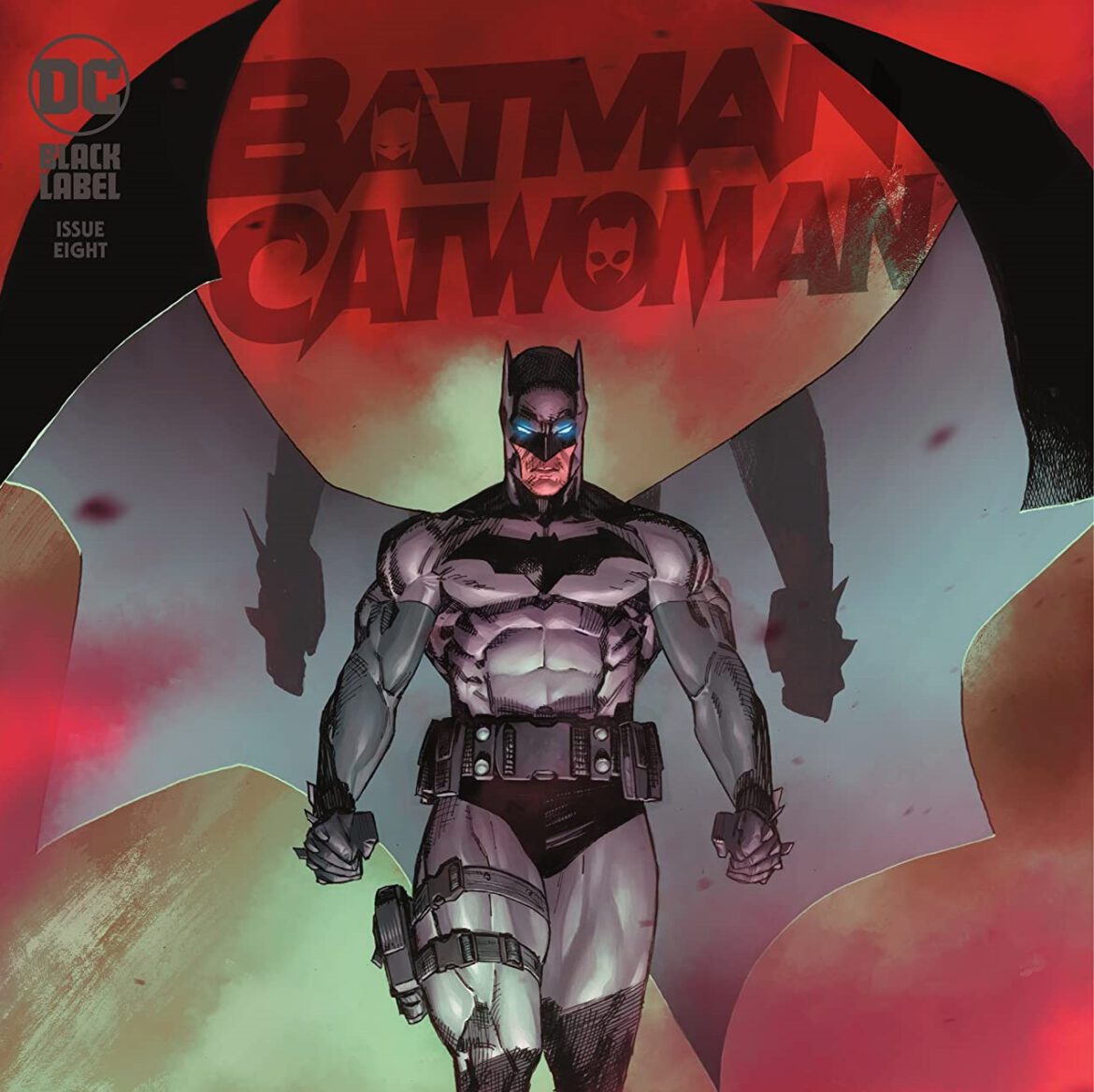 Overview: In Batman/Catwoman #8, Batman and Catwoman hash out their relationship. Meanwhile, Joker and Phantasm pay a visit to an unsuspecting special family.

Synopsis (spoilers ahead): Batman/Catwoman #8 begins in the present, as a man by the name of John Covington answers a ringing of his doorbell as his child tries to guess at the presents nestled under the Christmas tree. Upon opening the door, John is greeted by the Joker and the Phantasm.

In the future, Helena Wayne, in her Batwoman getup, meets with Commissioner Dick Grayson on a rooftop. Grayson has picked up smoking a pipe, saying that he gets why Gordon did it all the time, knowing full well that it’d eventually kill him. Dick tells Helena that he once asked Bruce Wayne why Bruce chose Selina, and Bruce told Dick that Selina was “the whole garden.”

In the past, Batman chases Catwoman. The two are arguing, with Selina telling Bruce that he is the one having problems choosing, not her. Bruce can’t let her go, and he insists that she join him in his crusade.

Later, Batman and Catwoman come upon a man on a bridge who is covered with blood. Batman placed a tracker on the Joker, but the Joker inserted it into this man, who warns them not to come any closer because Joker will murder his family. Catwoman tells the man that his family is most likely already dead. Batman tries to reason with the man, who insists on relaying a joke he is supposed to deliver. Before Batman can save the man, the man falls off the bridge. Batman leaps into action, but it’s too late. The man has passed away from the wounds inflicted upon him by Joker. Joker cut the man’s neck and shoved the tracker down his throat. Catwoman, meanwhile, hangs back. She is bored.

In the future, an elderly Selina Kyle visits a Gotham City morgue. She finds Joker’s body and isn’t surprised that Commissioner Grayson had this body shipped all the way back to Gotham from Florida.

Batman/Catwoman #8 continues back in the past, as Batman and Catwoman argue some more. Batman tries to instill a sense of moral responsibility in her, telling her that she’s a thief, not a murderer, which makes her different — and better — than the Joker. Catwoman fights back, telling Batman that he’s obsessed with controlling every aspect of her life, of being in every corner of her mind. To her, it’s not about moral responsibility, it’s about Batman’s obsession with her.

In the Covington household, Phantasm and Joker have the mother, father, and son sitting together on the couch. Phantasm calls the boy over and inspects him, asking the parents about their older son, Jack. Jack would have been 14, the mother tells Phantasm, but he went missing when he was a little baby.

In the future, Grayson and Batwoman find a note that leads them to a giant Christmas tree in the center of Gotham. There, dressed upon the tree, are Joker’s torn limbs.

Back in the past, during Selina and Joker’s hangout session at her apartment, Selina makes a move to ask Joker a serious question. She asks Joker if, through her in action, she’s responsible for what he does. Joker tells her about how somewhere in the world, there’s always someone starving to death, and that every day people make a conscious decision to keep a few extra dollars that could save that someone in their pockets. Since these people attend church or donate to a charity, they think they have a clean conscience, but the notion that they aren’t guilty is suspect. Joker then aims a gun at Selina and asks her where Batman hides out all day, as he’s been wanting to wish Batman happy holidays.

At the Covington household, Phantasm tells the boy that his older brother was her son. Before the boy can react, Joker strangles Phantasm with Christmas lights in front of the whole family.

Analysis: In Batman/Catwoman #8, it finally feels like we’re finally getting to the meat and potatoes of what writer Tom King wants to explore with regard to the relationship between Batman and Catwoman. The argument the two have is very much an adult one, and they both make valid points about each other. From Batman’s perspective, Selina is harboring a serial killer by not divulging Joker’s whereabouts or happenings to him. Her actions, very much so, lead to the deaths of innocents in Gotham City.

From Catwoman’s perspective, it’s the control that Batman is grappling with. He lusts after her, and because Batman is lusting after Catwoman, he demands that she be the beacon of morality that he expects of himself. The argument, from Catwoman’s perspective, isn’t about whether Catwoman is a good or bad person, it’s about how much of her agency is of her choosing and how much is pressure from Batman.

Near the end of Batman/Catwoman #8, however, we see that Catwoman doesn’t have as much free agency with the Joker as she thinks she does. In her last flashback with him, Joker pulls a gun on her and asks where Batman hides during the day. The subtext here is that Joker, in turn, pressures Catwoman in ways that are similar to Batman. She’s not the free agent she thinks she is, getting this pressure from both sides.

This dynamic is fascinating, especially for a character who is normally characterized as someone who does what she pleases when she pleases. More than in King’s run on the main Batman title, we as readers really get the opportunity in Batman/Catwoman to see Catwoman for who she is. She’s trapped, walking a line between her criminal instincts and her desires, buried deep beneath the alcohol, to be a good person. It’s a tough spot, especially since she loves the way Bruce makes her feel, despite never fully committing to the cape and cowl act.

The rest of the issue feels like window dressing. The only other major reveal is that we find out that Andrea Beaumont’s son is the older brother of the Covington home. Beaumont tells this to the Covington boy, and the parents affirm that their eldest son, Jack, went missing at the hospital 14 years ago. Since we know from Batman/Catwoman #1 that the Phantasm returned to Gotham to find her missing fourteen-year-old son, one wonders if Andrea stole her son from the hospital fourteen years prior. This would mean that he ran away from her home and headed to Gotham, where he was presumed to have been murdered by Joker. It’s a surprising revelation, but at this point, we’re still missing quite a few pieces to fill the gap on who this boy belongs to and what ultimately happened to him.

This seems to be a trademark of writer Tom King though. He likes to scramble up his stories’ timelines and feed his readers small bites, withholding all of the clues until the very end. It makes for an enticing read, if only sometimes. This tactic can also prove to be a headache (especially if you’ve read Heroes in Crisis).

Batman/Catwoman #8 marks the second issue for artist Liam Sharp. Overall, his art fits nicely with the tone of this series, and his depiction of the Phantasm, especially, is haunting and atmospheric. That said, Sharp’s work doesn’t feel as polished in this issue as it did in Batman/Catwoman #7. Particularly in the flashback sequence between Selina and Joker, there’s something off that feels out of sync with the rest of the book, and, at first, it made me question if there was a fill-in artist for a few panels.

One nice touch Sharp brings to the table is in the eyes of the Joker near the finale of this book. There’s a radiating sense of evil emanating from them. We see this first when Joker aims his gun at Selina, and it transcends time to that final moment where Joker strangles Phantasm. It’s haunting, and it speaks to a bottomless pit of evil that lurks within Joker’s body.

Batman/Catwoman #8 explores Batman and Catwoman’s relationship on a level deeper than we’ve seen in many Bat/Cat depictions. It’s the heart of this storyline, finally, and we can only hope King and Sharp take this dynamic to new heights.