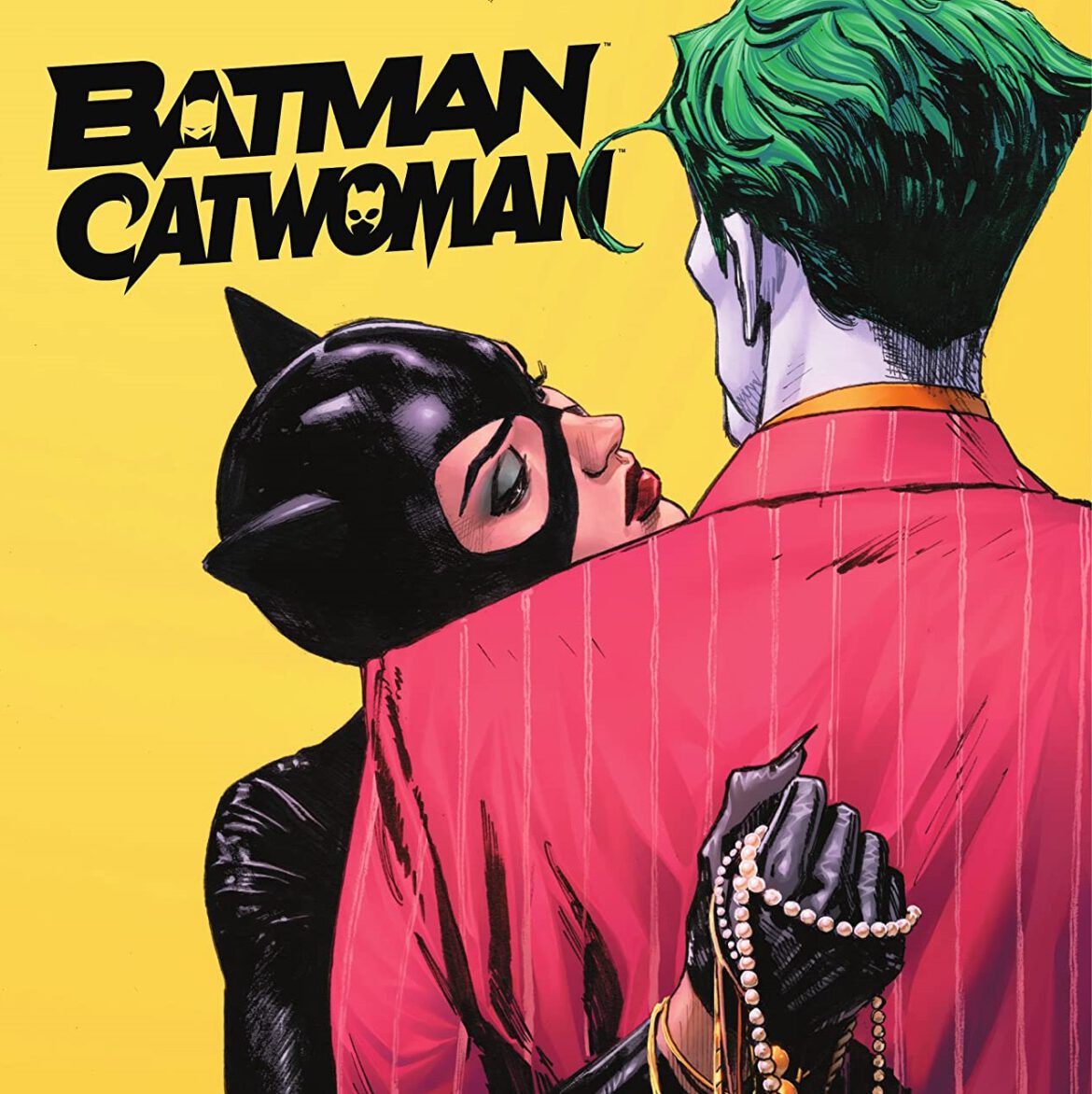 Overview: In Batman/Catwoman #9, an older Selina tries to escape from her daughter, Batwoman. Meanwhile, Joker is about to end Phantasm’s life right before Batman and Catwoman’s eyes.

Synopsis (spoilers ahead): Batman/Catwoman #9 begins in the present, as Joker strangles Andrea Beaumont, better known as the Phantasm, while singing Christmas carols. This is a continuation of the ending of Batman/Catwoman #8.

In the future, a worn-out Oswald Cobblebot dons his clothes and trademark hat, then climbs into a limo waiting outside of his residence. When the driver asks where Cobblepot wants to be driven to, a depressed Oswald asks to be driven into the river. Another voice chimes in, telling Penguin that it sounds like a plan. It’s Selina, and she starts to make small talk with Penguin. Penguin has none of it and lunges for her. Selina breaks Penguin’s nose, then tells Oswald that she needs a favor.

Back at Selina’s apartment in the past. Joker picks up where he left off in the last issue, asking Selina about who Batman is and where he lives. Joker tells Selina about a dream he has, one where Batman comes home after a long night of crime-fighting, and just before Batman retires, Joker stabs the Caped Crusader to death. Joker asks again for Batman’s address, reminding Selina that it’s Christmas.

As he continues to strangle Andrea in the future, Joker talks about how the song “O Little Town of Bethlehem” is about the world changing, about how one death coincides with a grand birth. A batarang flies past him and interrupts his speech. Selina asks Batman for permission to kill the Joker, reminding Batman that it’s Christmas. Batman tells her no.

In the future, Selina tortures Penguin just a little bit more, then asks him to smuggle her out of Gotham. She explains that her daughter, Batwoman, has walled off the city, making it nearly impossible for Selina to escape. When Penguin tells her that he owes Catwoman nothing, Selina reminds Penguin that she killed the Joker, which means everyone owes her.

Back in the past, Bruce is practicing his punches on a punching bag, and he asks Alfred what is wrong with him. He realizes that Selina is a criminal and that she associates with all his rogues, but for the life of him, Bruce feels like he might love her. Alfred sighs and tells Bruce, “It has been my experience that when one person loves another, be it of romantic nature or even the love a father carries for a son, one can forgive the other their… eccentricities.”

Bruce thinks about that for a moment, his expression turning sour. Then, he asks Alfred to hold the punching bag for another round.

Batman/Catwoman #9 continues in the present, as Joker continues to strangle Andrea Beaumont in front of Batman, Catwoman, and the family of the child Andrea stole and claimed as her son. Joker admits that he doesn’t know why everyone is so mad at him for trying to kill her, as she literally abducted this son from his son and then tried to pass it off as if she were the boy’s mother. As Joker puts it, Andrea was so desperate for love that she had to steal it. Joker finally kills Phantasm.

Penguin finalizes his call and sets up a pickup for Selina. While they wait, they talk about the good old days, about how Joker wasn’t always so horrible in the early days. Penguin reminisces about how fun it was, and Selina notes how crazy they all were.

Back in the past, Selina grabs Joker and forces him to look her in the eyes. She doesn’t like what she sees, then calls Joker a liar.

After he drops Andrea’s body, Joker grabs a present he snuck under the tree. It’s a bomb, and he kicks it. The explosion rocks the home Joker, Batman, Catwoman, and Andrea’s son’s family are all in.

The doorbell rings at Penguin’s home. In walks Batwoman, and she’s here to collect her mother. Penguin takes pleasure in his double-cross of Selina.

Analysis: When it comes to depicting Joker’s wild mood swings, Liam Sharp is a master of showing readers Joker’s many different sides. In both penciling and coloring Batman/Catwoman #9, Sharp really lets loose and delivers a disturbing treat for the senses. Particularly when Joker is demanding to know Batman’s address from Selina in the past, Sharp shows a Joker with dead, yet hypnotizing eyes. The red in his eyes radiate throughout Joker’s dream of killing Bruce, and when we first see Selina in this scene, she is but a miniature placed upon this wild, red canvas Sharp associates with Joker. It’s a neat trick, and it gives a sense that Selina is hypnotized or entranced by Joker, which could be true, judging by how she calls him a liar after finally getting to look into his eyes.

Equally disturbing is the aura of coldness Sharp casts over everything in the scenes between an elderly Selina and Penguin. Their relationship is hostile, and readers can really feel it in the paneling and the dark blue color scheme. It’s an admirable effect and a great stylistic choice that elevates the story in this issue.

The story itself is moving along at a pace that fans of Tom King have come to expect. It’s almost a trope at this point, with all three eras intersecting and echoing each other. When Joker asks Catwoman to give him Batman’s address because it’s Christmas, this is almost immediately followed by Catwoman making a request to kill Joker because it’s Christmas in another timeline. The most overt echo is the final page, wherein we see Catwoman taking a similar attack stance against Joker in two different timelines. In a third timeline, Batwoman, Helena Wayne, takes the same stance with Selina.

Batman/Catwoman #9 really deals with what people put up within their relationships because of the kinship or love they feel for one another. Alfred puts up with Bruce being Batman because he’s assumed the role of the father having love for the adopted son. Batman struggles to accept Catwoman’s eccentricities because of his love for her. Catwoman realizes that Joker is using her, and she’s horrified to realize that she’s let her guard down and accepted Joker’s eccentricities, despite him not returning the favor.

Batman and Catwoman, together, are also confronted with the idea that Phantasm was allowed to live her life with a son she abducted from another family until Joker put this whole story in motion.

There’s a lot going on beneath the surface of this storyline, but it’s hard to put a finger on what the ultimate endgame will be. This series, thus far, has dealt a lot with betrayal, loyalty, love, and characters’ unwillingness to change or adapt to each other. It’ll be interesting to see how Tom King and Liam Sharp will tie these ideas together.

Batman / Catwoman #9 is a beautifully grim work of art from Liam Sharp. If you’ve been enjoying this series thus far, this issue delivers more of the same plotting from Tom King, with different timelines echoing each other and pieces of the puzzle intentionally left out to obscure the full picture.