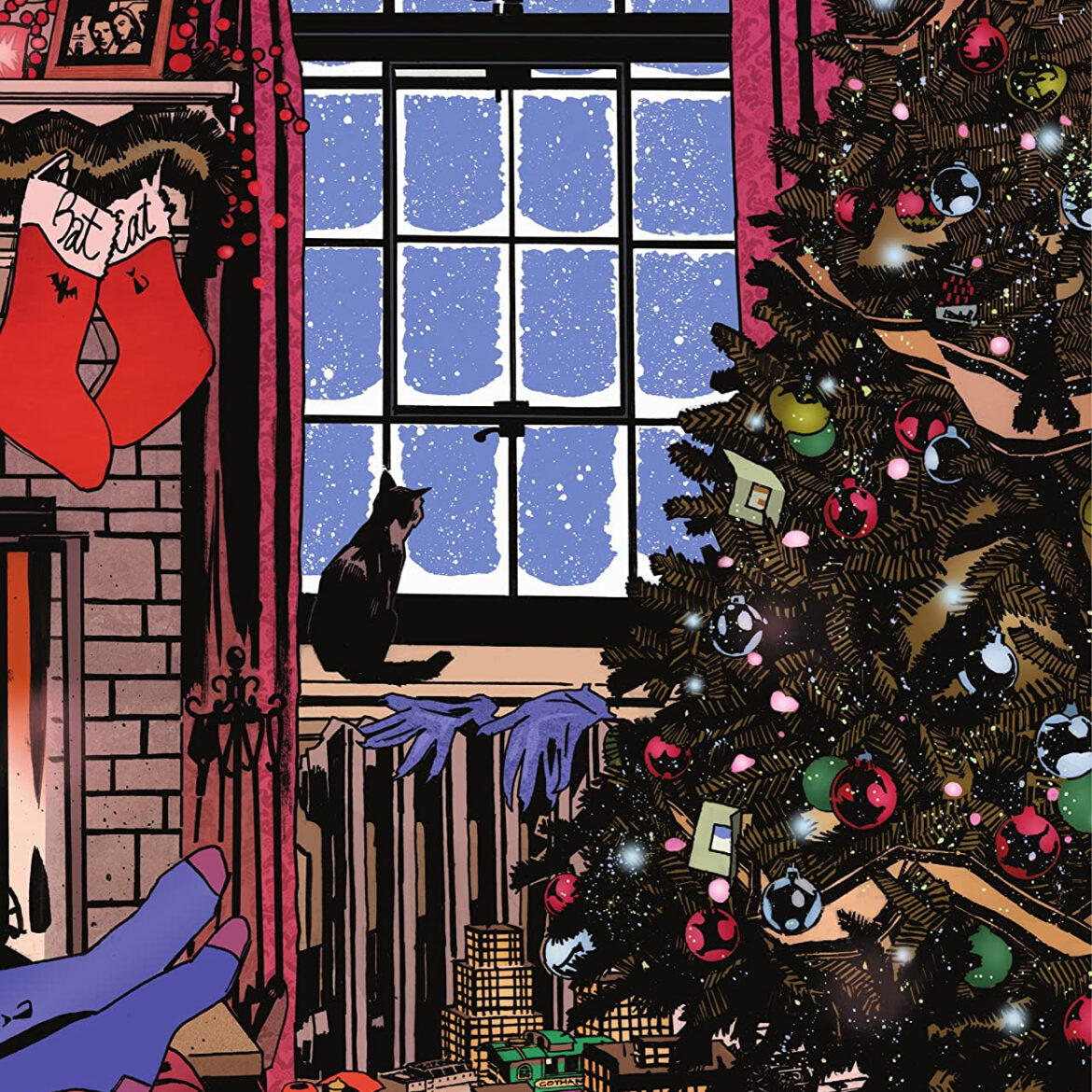 Overview: In Batman/Catwoman Special #1, readers are shown Christmas over the years through Selina Kyle’s eyes, from babyhood through her final moments.

Synopsis (spoilers ahead): Batman/Catwoman Special #1 begins in the past, as a drunk, homeless man singing Christmas carols scares a cat, causing the cat to jump into the dumpster. In the dumpster lies a baby. A year or two later, this baby, now a toddler, wanders the halls of an orphanage, in pursuit of a cat. This toddler chases the cat to a Christmas tree.

A couple more Christmases after that, a very young girl draws a picture. It’s a Christmas gift to the boy in the painting that hangs above the mantle in the orphanage. That boy is Bruce Wayne, and he’s with his parents. The girl offers him a picture of a cat, telling Bruce that she’s not always nice, but she’s nice to cats.

At around age six, this same child tells the portrait of Bruce on Christmas that she saw what happened to his parents. She tells Bruce that she doesn’t have parents either and that Bruce can talk to her if he’s lonely.

Another Christmas later, this young girl is cracked across the hand for trying to run away. The next time we see her, she’s fled the orphanage. She falls from a fire escape, but a stray cat comes to her aid.

The Christmas after that, this young girl is told that she has to stay silent in the sewers, and she’ll survive the night. She’s surrounded by alligators, but she manages to tell the Sewer King that she understands and will obey. Time passes, and this same girl bumps into a wealthy couple on another Christmas night, stealing a woman’s jewels.

In juvenile detention, this girl enjoys a Christmas dinner provided by the Wayne Foundation. Another delinquent tells the girl that she knows about the cat the young girl keeps hidden. This other delinquent tries to blackmail young Selina Kyle, but Selina beats her down.

Another Christmas later, Selina drinks from a bottle of scotch while walking on a powerline above Gotham City. The following Christmas, Selina entertains a man in a bar, only to knock him out cold and steal his money. After that, Selina spends Christmas at Arkham Asylum.

The next time we see Selina, she’s in one of her early Catwoman costumes, and she’s drinking with Joker, who is telling a joke about Batman and Robin. A year later, Catwoman kisses Batman.

Time passes as Batman/Catwoman Special #1 continues, and Batman and Catwoman duel in an art museum. Catwoman is angry and frustrated, telling Batman that they kiss, yet Batman always locks her up.

The next Christmas they share together, Bruce and Selina are out of costume and enjoying the warmth of a fire in Wayne Manor. There’s an awkwardness, as Bruce and Alfred have both gotten gifts for Selina. She doesn’t know how to react.

A Christmas later, Selina is up early enjoying a warm cup of coffee. Alfred walks by, surprised that she’s awake so early. Selina tells Alfred that she’s admiring the Wayne Family portrait, which is the same one she saw in the orphanage. Alfred tells her that it’s a favorite painting of his as well, reminding him that the house has seen more love than all the pain it endured.

The next Christmas, Catwoman strangles Joker. A year after that, Batman and Catwoman are out on patrol. Batman is detailing a diamond heist, ending his summation by telling Catwoman that she needs to give it back.

A year later, Selina is pregnant. A Christmas after, and Catwoman is out on patrol, battling Penguin, while Bruce describes over the comm their young daughter opening a gift from Selina. It’s a pet cat.

The following Christmas, Helena, surrounded by cats, holds a present. Bruce and Selina kiss by the tree. The next year finds Batman battling Penguin while Selina stays at home with Helena. Helena opens a gift from Bruce, and it’s a sword. The year after that, Selina and Helena are looking at the Wayne Family portrait, and Helena asks Selina about her parents. When Selina says she doesn’t know what happened to them, Helena says that Batman could probably find out.

The next Christmas finds Catwoman taking down the Joker, who is yet again telling another Robin joke. She scratches his face, then pulls herself back when she remembers that she promised that she wouldn’t kill Joker.

The following year, Batman and Catwoman are driving around in the Batmobile. Batman wants to take Helena out on patrol, but Catwoman doesn’t like the idea. The Christmas after, Helena, dressed up as a Robin, is about to go out on patrol with her father. Catwoman makes her promise that she’ll run away if she sees the Joker.

The next year, the family is tied up and dangling above a pit of alligators. The Christmas after, the Bat-signal shines in the window of Wayne Manor. A much older Bruce is about to suit up, but Selina tells him that Helena can take care of it.

The following year, an elderly Catwoman catches an elderly Riddler trying to rob a bank. Riddler has dementia and is wondering where everyone is. Catwoman takes pity on Riddler and offers to escort him back to the hospital.

A year later, Bruce tells Selina about a diamond on display. The diamond is secretly owned by a shell company for Wayne Enterprises, so Bruce tells her that she can steal it. It’s his gift to her, but Selina throws it back in his face, claiming that he knows nothing about her after all these years. On the next Christmas, the two walk the sands of a desolate beach together.

Helena assumes the mantle of Batwoman the following year and races her mother across rooftops. The year after, Bruce is on crutches, and Selina escorts him to where he can rest.

Bruce doesn’t make it to the next Christmas. Instead, Selina sits alone before his grave, telling him that the pain she feels isn’t good. It’s unbearable. A few Christmases later, Selina makes a donation to the orphanage under the stipulation that cats must be provided for all of the children.

The following Christmas, Selina picks up a stray kitten on her way home. A robber sees that she’s wearing expensive jewelry and threatens to kill her for it. Selina scoffs. A gun thunders twice. The kitten nurses Selina’s bleeding body.

It’s a beautiful issue, wherein we first meet Selina as an abandoned orphan. From there, she’s isolated and alone in an orphanage, and her only connections are to a cat and a family portrait of Bruce Wayne. Each Christmas, we see Selina muster up the strength to escape, and when she’s out on the streets, we watch her grow as a stray cat, first stealing and then learning how to hunt for bigger prey. Selina’s relationship with Batman develops slowly, and Christmas by Christmas, she learns to enjoy Bruce’s company.

Eventually, they have a family together. Bruce and Selina take turns going out on patrol while Helena grows up, and once she’s old enough to take the mantle of the Bat from Bruce, the two grow old together. This is a continuation of Batman Annual #2, leading to the tragic death of Bruce featured in the much-revered annual. We see several Christmases after Bruce’s death wherein Selina pushes through the pain and refocuses on cats before ultimately dying herself.

Batman/Catwoman Special #1 resonates with a couple of different themes. For one, Selina’s life is very much like a stray cat. She starts out on the street, finding temporary shelter while learning to hunt. When she ultimately finds someone that wants to take care of her, she’s slow to trust that person, and it takes a long time before Selina is willing to welcome the housecat life. She never fully settles in, but she uses the comfort and the warmth to provide a great home life for her family.

Throughout Selina’s life, there are always cats surrounding her in key moments. When she’s a baby, abandoned in a dumpster, she’s found by a cat. When Selina injures herself after trying to escape from the orphanage, she’s nursed by a cat. Even in her final moments, a cat comes to her aid after she’s been shot and is bleeding out on the street. Early on in Batman/Catwoman Special #1, Selina tells a portrait of Bruce Wayne that she’s not always nice, but she’s always nice to cats. This resonates as cats are always nice to her.

Another constant in Selina’s life is Bruce Wayne. At first, he’s a boy in a painting that she talks to, in part because he has no parents either. When the two meet and eventually have a family together, she assumes the mantle of Martha Wayne, wearing jewels and dying at the hands of a gunman in an alley. One could argue that throughout her life, the Waynes have always been providing a place of shelter for her. First, at the orphanage, then the juvenile detention center, and finally Wayne Manor. Another argument is that Bruce and she are two “strays” from opposite sides of the spectrum who are nice to each other. Either way, all of these ideas and themes echo throughout Batman/Catwoman Special #1, each event taking place on one Christmas after another because, for Selina, it means warmth and comfort from the cold.

We see a lot of humility and love from Selina in this issue, something that has been absent in much of the Batman/Catwoman run thus far. Selina cares for cats, for Bruce, for Alfred and Helena, and even for an elder Riddler, whose mind has been ravaged by dementia. It’s tragic, beautiful, and effective in showcasing a complex life tethered to a feral cat spirit. When her life is in its final few Christmases, Selina grieves for the warmth she’s lost, then makes a decision to use her status to ensure all the other orphans like her have cats, too.

Batman/Catwoman Special #1 is arguably the best issue of this maxiseries thus far, filled with tender moments that speak to the thing fans most want in this book, the love between Batman and Catwoman and the nuance between the fights.