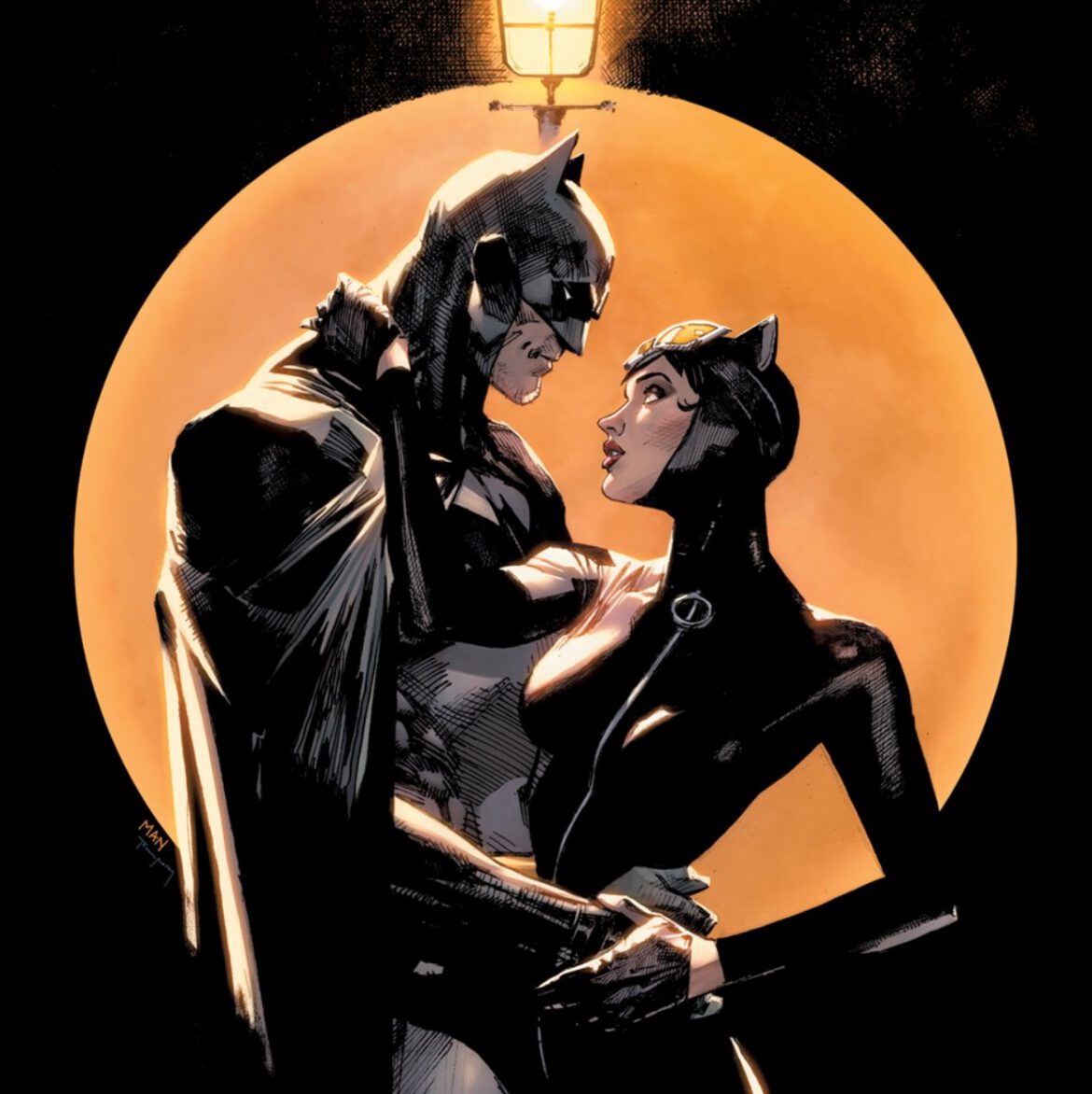 Overview: In Batman/Catwoman #11, the Phantasm recounts how she came to raise her child. Meanwhile, Helena Wayne apologizes to her mother, and the two of them share a moment together.

Synopsis (spoilers ahead): Batman/Catwoman #11 begins in the future, as Batwoman (Helena Wayne) chases Inque while Commissioner Dick Grayson asks her about (Catwoman) Selina’s whereabouts. Batwoman lies, telling Dick that she just wasn’t good enough to stop her mother. Dick doesn’t believe it, telling Batwoman that he was there when Bruce first met Selina on a boat all those years ago (if you’re a fan of Tom King’s Batman run, this is a nice callback to an age-old debate between Batman and Catwoman). Batwoman apologizes.

In the past, Riddler is on the run, and Catwoman offers him a hiding spot in a dumpster. Riddler is suspicious, but eventually, he relents and climbs in. He tries to tell Selina a joke, but his joke is poorly timed, as Batman hears it. Catwoman tells Batman that she got him a Christmas present, but the addition of Riddler makes it two presents.

In the present, Batman and Catwoman confront the Phantasm (Andrea Beaumont). Andrea tells them that after Batman stopped her before she could avenge her father and murder the Joker, she bided her time. She was consumed with killing Joker, and when the day finally came a year later, she found Joker nursing an infant.

At the Batcave, Batwoman orders Dick to leave. He’s come to press her on the whereabouts of her mother. Helena uses a line on Dick that Selina used in Batman/Catwoman #6, telling him that Bruce would have been so proud. Dick overcame his darkness and turned out so nice. Helena, on the other hand, turned out like her father. She knocks Dick down, ordering him to either fight her for the mantle of the Bat or get out of her cave.

Batman/Catwoman #11 continues in the past, as Catwoman leads Batman to Joker’s toy store hideout. Batman doesn’t hesitate to stop the Joker, who is dressed up as a wooden soldier, from going through with his next diabolical plot.

The Phantasm continues recounting the story of her hunt for Joker. When she found him nursing a baby, she ordered him to put the child down. Joker refused, saying his goodbyes to the baby before tossing the child into the air. Phantasm rushes to catch the baby. After saving the boy, she realizes that Joker has fled.

Andrea tells Batman and Catwoman that she raised this child because he made her feel less alone in the world. She was a mother now. When the boy grew up, he found letters from Bruce to Andrea and assumed that meant that Bruce was his father. When he returned to Gotham to seek out Bruce, Joker learned of his arrival and murdered him.

In the future, Helena tells Selina that Dick left. They connect, and Selina talks about how, in her life, she made every mistake a person can, except for raising Helena. Mother and daughter embrace.

In the past, Batman thanks Catwoman for the gift. After taking down Joker, the two of them stand beneath the mistletoe.

In the present, Andrea finishes her story, telling Batman and Catwoman that she thought the boy was Joker’s child. When she learned the boy had another family, she tracked them down. Unfortunately, she led Joker right to the family, and he murdered each member. For penance, Andrea impales herself with her own scythe.

Analysis: In this penultimate issue of Tom King and Clay Mann’s Batman/Catwoman series, Andrea Beaumont lays bare the story of how she came to claim the child as her own. Readers of Batman/Catwoman #11 learn that the Joker convinced her into thinking it was his son, and she never realized that Joker tricked her into abducting and raising a child who already had a family. To make matters worse, when Andrea discovered this family, Joker dug the knife in deeper by killing them all, forcing Andrea to bear the burden of her guilt as well as each family member’s death.

This reveal is the ultimate sick and twisted joke that the Clown Prince of Crime could have pulled on the Phantasm, and because neither Batman nor Phantasm killed him, Joker was allowed to rob Andrea of a family twice. While Selina doesn’t make mention of it in Batman/Catwoman #11, it’s a pretty sure bet that this is the reason why she killed Joker in Batman/Catwoman #1. This plot is deeply unsettling and cruel, and it’s horrifying enough of a reason to justify Selina’s actions. This also provides a good reason for why Catwoman views Batman in the way that she does, as someone who is a bit too rigid and stuck to an ideal when perhaps a different approach would reduce future harm.

Andrea gives fuel to this point in one of her deliberate word choices. When she recounts how she came to save the baby, Andrea expresses regret, saying that she should have stuck to killing Joker instead of catching the child. “I should’ve spared the world a decade of holocaust,” she says. Ultimately, this statement gets to the meat and bone of what King and Mann have been building toward.

In a lot of ways, this story is about family. It’s about Bruce and Selina coming together and rising up from completely different walks of life, which affect how they each see the world. It’s about them raising a child together, and the story touches upon that child oscillating between two different views of the world — one hopeful and the other bleak. On a deeper level, King and Mann are exploring the very real, dark thoughts that keep people, particularly parents, up at night. Andrea’s family was both given to her and stolen from her in sick and twisted ways, and it’s of a level that’s so horrible that the literal murder of Joker is offered as an appropriate response to protect future innocent families from harm and destruction.

There’s no easy answer, and in the pages of Batman/Catwoman, readers are shown two very different perspectives on how to handle something like this. There’s Phantasm’s way, which later becomes Catwoman’s method when Bruce has passed. Then there’s also Batman’s way, which Catwoman would consider rigid and impractical. Why? Because Catwoman has seen Gotham from the street level, from the orphanage, and the back alleys. Batman has seen Gotham from his tower, only seeing it from the street when he plays dress-up.

It’s an interesting concept and one that provokes a lot of discourse and thoughtfulness. Ultimately, there may not be an appropriate answer to what’s the right decision, as depending on the perspective, that seems to be a complicated and deeply personal opinion. Like real-life, like fallible humanity and its dark and light sides, the issue is complicated and covers a wide berth of gray areas.

If there’s one area of the comic that suffers, it’s the final few panels on the last page. When Andrea decides to take her own life, the paneling doesn’t evoke the mortifying sense of horror one would expect from such an action, and it feels like the creative team simply ran out of space to end such an intense moment. Still, this issue was incredible, and it very well might be a story that comic readers will talk about for a while.

Batman/Catwoman #11 is both a love letter of fun Batman references from past comics and cartoon series, as well as a haunting and mortifying penultimate issue to a maxi-series unafraid to tackle unsettling topics.