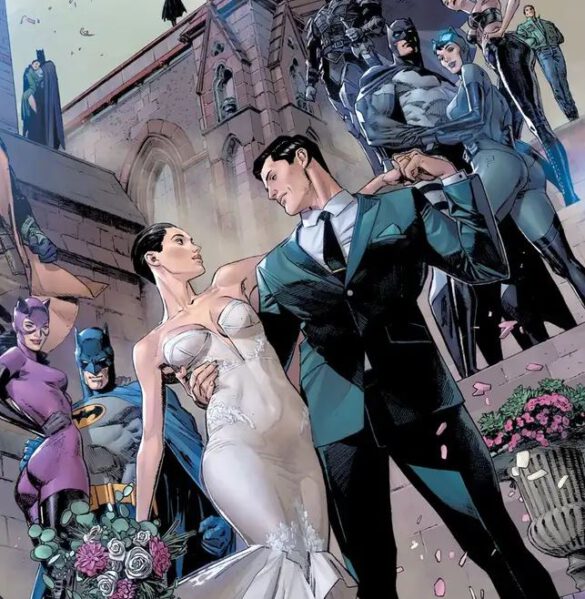 Overview: In Batman/Catwoman #12, Selina Wayne leaves Gotham City, lying low after murdering the Joker. In the past, Bruce Wayne and Selina Kyle finally tie the knot.

Synopsis (spoilers ahead): Batman/Catwoman #12 begins early in her relationship with Bruce Wayne, as Selina Kyle wakes up on Christmas morning and sneaks downstairs inside Wayne Manor. She finds presents under the tree. Selina is taken aback, and Alfred makes a joke saying that despite the manor’s defenses against a sizable army, Santa still finds a way to sneak in.

It’s Christmas in the future, and an elderly Selina is sitting at a table across from Helena Wayne. Selina implores Helena to open a gift, but Helena refuses. Helena assumes it’s her mother’s wedding ring, which she doesn’t want. As Helena points out, Selina is still wanted for murder.

When Helena points out the missing ring on her mother’s finger, Selina notes that she doesn’t like to fly with it. After a heated back-and-forth, Selina leaves to pack her bags.

In the present, Selina and Bruce share a somber Christmas after the death of Phantasm. Bruce mourns the lack of his ability to heal the world as Batman. Selina responds by asking him to stand in front of the mirror.

She wraps her arms around Bruce, and as they look, Selina points out that this is who they are — Bat and Cat. After all the wounds and pain and gadgets, they have each other.

In the past, after Catwoman ends her friendship with Joker, Batman asks her what changed. She tells him that like everyone else, Joker put her in a box of being either this or that.

As Batman/Catwoman #12 continues back in the future, Helena storms into Selina’s room after opening the gift. The gift was a pair of Joker’s glasses. When she questions whether it was a joke, Selina confesses that all of the other evidence tying her to Joker’s murder was destroyed when she turned herself in. The glasses are all that’s left to put Catwoman away.

Helena screams about being put in this position, about Selina trying to prove a point by giving Helena the option to put her mother away or not. Selina just continues packing, saying that her lawyers will fix everything, and she will be back in a year or less.

Back in the past, after their conversation about Joker, Batman and Catwoman fight Killer Croc. It is here when Batman tells Catwoman that he loves her.

In the future, Selina lounges on a beach next to a very-alive Andrea Beaumont (Phantasm). She notes that Clayface, who pretended to be Phantasm and die all those years ago, kept his secret. Selina says that she wishes Andrea could have been there to see Joker die.

Back in the past, Bruce and Selina get married by a man dressed in an Adam West Batsuit. A Christmas song serenades their kiss.

Analysis: For fans of Tom King’s Batman run, this final issue of King and Clay Mann’s Batman/Catwoman maxiseries completes a much-maligned editorial decision from several years ago. It reverses the non-wedding between Batman and Catwoman, the advertised event of the year that turned out to be an overly elaborate plot by Bane to emotionally break Batman. Though the wedding not happening wasn’t King’s fault (it was an editorial decision), the non-wedding moment in that particular Batman run soured many fans against the remainder of the run.

There are other things that happen in this finale in Batman/Catwoman #12. Andrea Beaumont is revealed to be alive, her death faked by Clayface. Helena, in her arguments with her mother, accuses Selina of doing to her what Selina was viciously fighting against throughout the series. In this way, King and Mann confirm that as much as Helena takes after her dad as Batwoman (complete with Bat-gadgets and Batcave), she is also very much her mother. Ultimately, she’s both the best and worst of both of her parents, a child born of their loving union.

The final pages, however, are devoted to the wedding. Though this series has been confirmed as non-canon, King fulfills his promise from several years ago. Bat and Cat have married, and the storyline has seen in the heartfelt Batman: Annual #2 comes full circle. Does this ending repair the hurt feelings after King’s Batman #50? It’s difficult to say. What isn’t difficult to gauge is that this ending brings the story back into focus as one about Batman and Catwoman and their love for one another. Readers have seen so much fighting and arguing between the two of them throughout this series. It’s great to see the focus carrying the relationship back home, ending on a moment many fans of both characters have been waiting patiently to see for years.

Personally, the best moment of Batman/Catwoman #12 is in the first few pages when Selina Kyle sneaks down the steps of Wayne Manor on Christmas morning. Her bewilderment and delight at seeing a Christmas tree surrounded by presents, and her banter with Alfred, is delightful. It’s a quiet moment that subtly connects with Selina’s childhood at the orphanage. The delight and wonder behind her eyes is her child’s wonder. Something she’s fought so hard for has been fulfilled, and Alfred knows best to affirm the moment with a statement that maintains that Christmas magic.

Clay Mann’s art is as beautiful and graceful as ever. He has a knack for putting bodies on display, and this issue definitely feeds into that. Fans who have been longing for this wedding will love Mann’s final page. It’s beautiful and just begging to be made into a poster.

Batman/Catwoman #12 corrects a mistake from several years ago that was more of a DC editorial decision and less of a creator’s choice. The result is a heartfelt union between two characters that many fans have longed so long for.