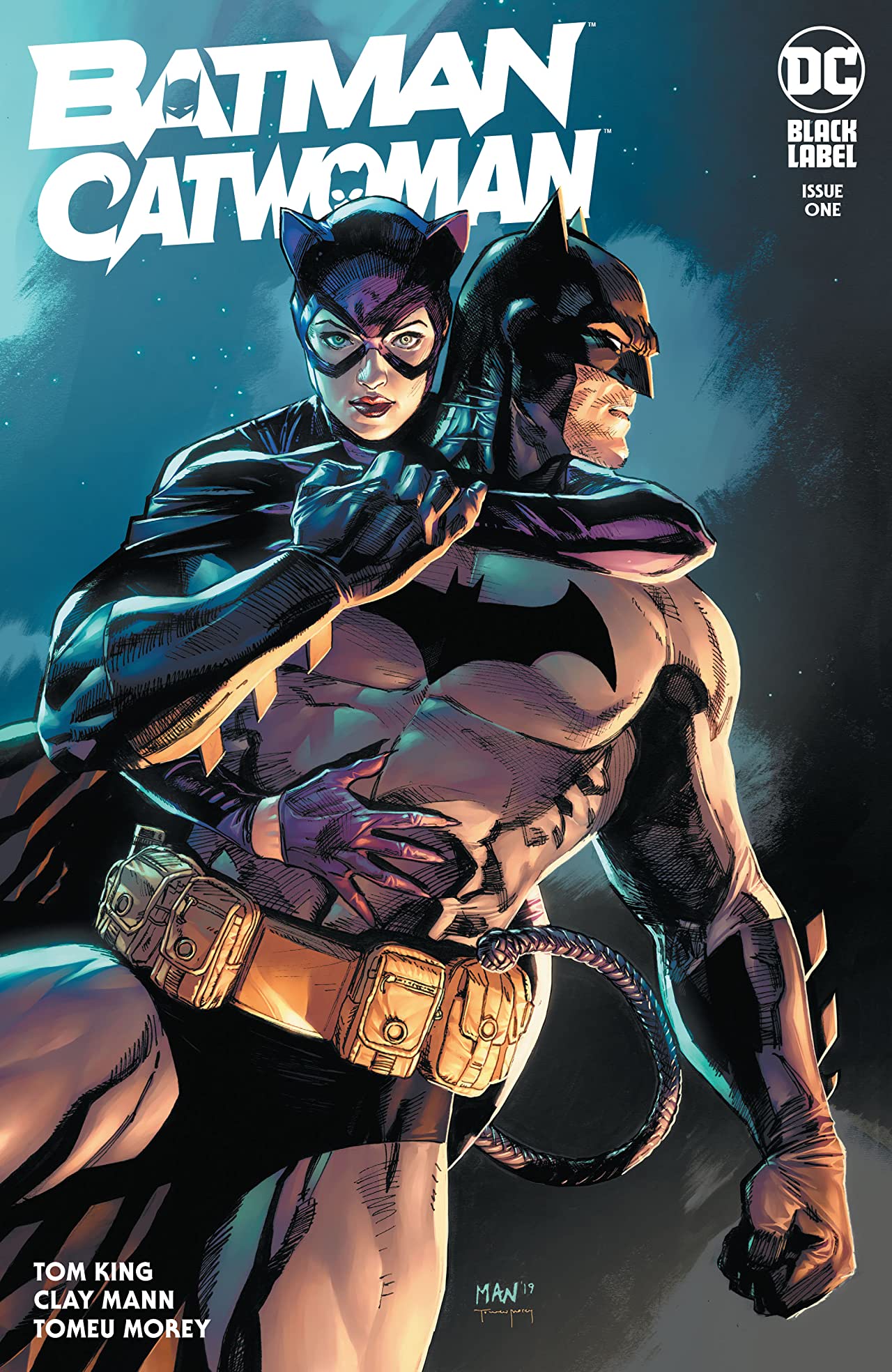 Synopsis (spoilers ahead): “Silent Night” blares from the radio as Selina Kyle drives a convertible over a bridge on a sunny day. Meanwhile, the song serenades a jump to Bruce Wayne sitting across from Andrea Beaumont in Wayne Manor. The two are drinking tea. Andrea makes a comment about how not much has changed, noting that it’s probably Alfred’s influence. Bruce informs Andrea that Alfred has passed away.

Bruce then recalls a time when Alfred interrupted Bruce and Andrea’s lovemaking with a breakfast tray.

At the Seabird Island trailer park, Selina Kyle parks her car and approaches a mobile home. She rings a doorbell, and an old man with glasses rushes to answer, surprised to see that it’s Selina Kyle.

We jump to Batman and Catwoman atop a gargoyle. Batman tells Catwoman that Andrea Beaumont is back in town. Andrea is looking for her son. He’s fourteen, and he’s run away. The two then banter about Andrea’s history, which essentially is just a recollection of plot points from the Mask of the Phantasm animated film.

The scene changes again, and Catwoman recalls Batman and herself making love atop Gotham City. A much older Selina, the one seen driving the convertible, looks at a photo of grandkids belonging to the old man she’s visiting. Selina tells the man about her daughter, Helena. Helena is having some trouble dating, and the old man uses that as a segue into talking about Selina’s and his own shared costumed profession in years past.

In the past, Catwoman and Batman confront the Sewer King in their quest to find Andrea Beaumont’s missing son. Later, Catwoman breaks into the house of Jimmy the Lion, a mob enforcer. She sees Joker has already beaten her there, having killed the enforcer. The two trade witty barbs.

Back at the mobile home, Selina’s cat claws at the welcome mat, pulling it back to reveal dried blood on the floor.

In Gotham, Selina strings up a teen who was ratted out by the Sewer King as having run with Andrea’s son. The teen says that Andrea’s son was living under a bridge and looking for a way to reunite with his father.

In another moment, Selina Kyle and Joker stand atop a roof and talk. Joker asks Selina to kill Batman for him. She declines. Joker tells her that this isn’t who she is, that she’s fun while Batman isn’t.

Back at the mobile home, Selina tells the old man that Bruce Wayne became sick and passed away. This is a reference to a story featured in Batman Annual #2.

Beneath Wayne Bridge, Batman and Catwoman find a jokerized teen. In another moment, someone at the police station asks Andrea who the father of her child was. Andrea replies, with tears in her eyes, that the father is dead.

Meanwhile, a naked Bruce Wayne lies in wait for Selina Kyle. She breaks into Wayne Manor and joins him in bed.

Selina Kyle and the old man embrace, talking about how it’s the end of something. Selina notes that since Bruce is gone, it means that Bruce can’t stop her from killing him. The old man starts laughing, and he pulls off his glasses and fake wig to reveal that he’s really the Joker.

At the cemetery, a gloved hand opens the tomb of Victoria Beaumont, revealing the mask belonging to the Phantasm. On her bed in an apartment in Gotham, Andrea sits beside herself, listening to “Silent Night.”

Analysis: Batman Catwoman #1 is disjointed, hopping between three different time periods in rapid succession, and it’s just the kind of abstract storytelling writer Tom King has found a home in. In some instances, we’re only in one time period for a panel or two before we’re back off again, jumping forward or jumping back through time as King draws parallels between moments through motifs and themes.

For example, when Andrea meets with Bruce at the beginning of this issue, she makes a reference to Alfred’s influence on Bruce. This pushes Bruce to think of Alfred, and the memory slips back to a time when Alfred walked in on Andrea and Bruce making love.

Later on in the book, when Batman and Catwoman find the body of Andrea’s missing son, we jump to the police station, where Andrea tells someone that the father of her son is dead. Immediately, we jump again to a moment where Selina, dressed in stockings and a bra, crawls forward, cat-like, to a naked Bruce. This moment oozes with the sexual tension that’s present throughout this entire issue, between Andrea and Bruce, Bruce and Selina, and Selina and Joker seemingly. It also draws a parallel between Andrea’s dead son and Bruce Wayne, suggesting that the true father of this boy is none other than Batman. Bruce apparently is unaware of this connection. While Andrea grieves, Bruce has moved forward with someone else. The parallel here is tumultuous, as it could also insinuate that Batman isn’t as noble as he wants to be. After all, King has Bruce and Selina’s sexual relationship juxtaposed with the grieving of a woman who was Bruce’s romantic interest only a few pages before.

Throughout this issue, King and artist Clay Mann weave other threads with similar motifs. When Batman and Catwoman go out on patrol to find the whereabouts of Andrea’s missing son, these moments are juxtaposed with Catwoman’s encounters with the Joker. They have a strange repartee, wherein Joker seems like a male confidant standing on the wayside, pulling Selina back to her villainous roots. While it’s nowhere near as steamy and passionate as Bruce’s romantic moments, there’s a tension here, and it serves to highlight a different kind of intimacy Selina and Joker share, which culminates in their “catching up” as older retirees. It is in one of this book’s final moments where Selina embraces Joker, and she tells him that she can finally kill him.

The way that Tom King plays around with this kind of storytelling is neat, and it echoes in a way many comic scribes could be envious of. It’s very clever. With Clay Mann’s absolutely stunning art, this interwoven storytelling comes across like poetry. Colorist Tomeu Morey emphasizes the cuts and juxtapositions with contrasting colors to signify that, though it may not seem like it in one panel to the next, we’ve jumped through a time portal once more, and we, as readers, are elsewhere yet again.

But beautiful doesn’t always work well, and in the case of Batman/Catwoman #1, this story is a little too clever. Once readers piece together what is happening, there are so many questions that bubble to the surface. Does Bruce know he has a son with Andrea? Are King and Mann trying to suggest that Bruce is selfish in that scene with Selina that is juxtaposed with Andrea’s grieving? What’s Joker’s relationship with Selina? The Sewer King, a character created for Batman: The Animated Series, appears in this issue as a former mentor of Catwoman’s — is this story canon?

Depending on how readers feel about canon, this last question may be the hardest pill to swallow. Batman/Catwoman #1 references some of the more intense moments of King’s Batman run (Bruce’s death in Batman Annual #2 & Alfred’s death in the City of Bane storyline), but it also leans heavily on Batman: The Animated Series. Andrea Beaumont’s entire backstory is hinted at with Batman and Catwoman recalling plot points from the Mask of the Phantasm film. In order for this book to work, that particular film is canon with this storyline. In effect, this book is both a sequel of King’s Batman run as well as Batman: The Animated Series. It’s a bit mind-boggling to digest at first, but there’s an interesting idea at the heart of it.

At the beginning of Peter J. Tomasi’s Detective Comics run, the video game character of Arkham Knight was introduced into the comic canon. Instead of recreating the plot points from the video game (which wouldn’t be possible anyway), the creative team thought to take the name and entirely reinvent the character into somebody new. The opposite approach is taken here. King and Mann are assuming that readers are quite familiar with Mask of the Phantasm and using it as a springboard for their storyline. It’s hard to gauge whether or not this tactic will work, as this first issue is really a collection of snippets tethered together through this motif of sexuality and loss. It’s interesting, albeit confusing. It’s poetic and alluring, albeit aggravating and mildly incoherent.

Here’s to hoping this storyline connects more dots and leads us down a more well-defined path in the issues to come. We’re going to need it.

Final Thoughts: Batman/Catwoman #1 is too clever for its own good. The story juxtaposes sexuality and death, offering up a bewildering story that leans on two entirely different Batman canons.