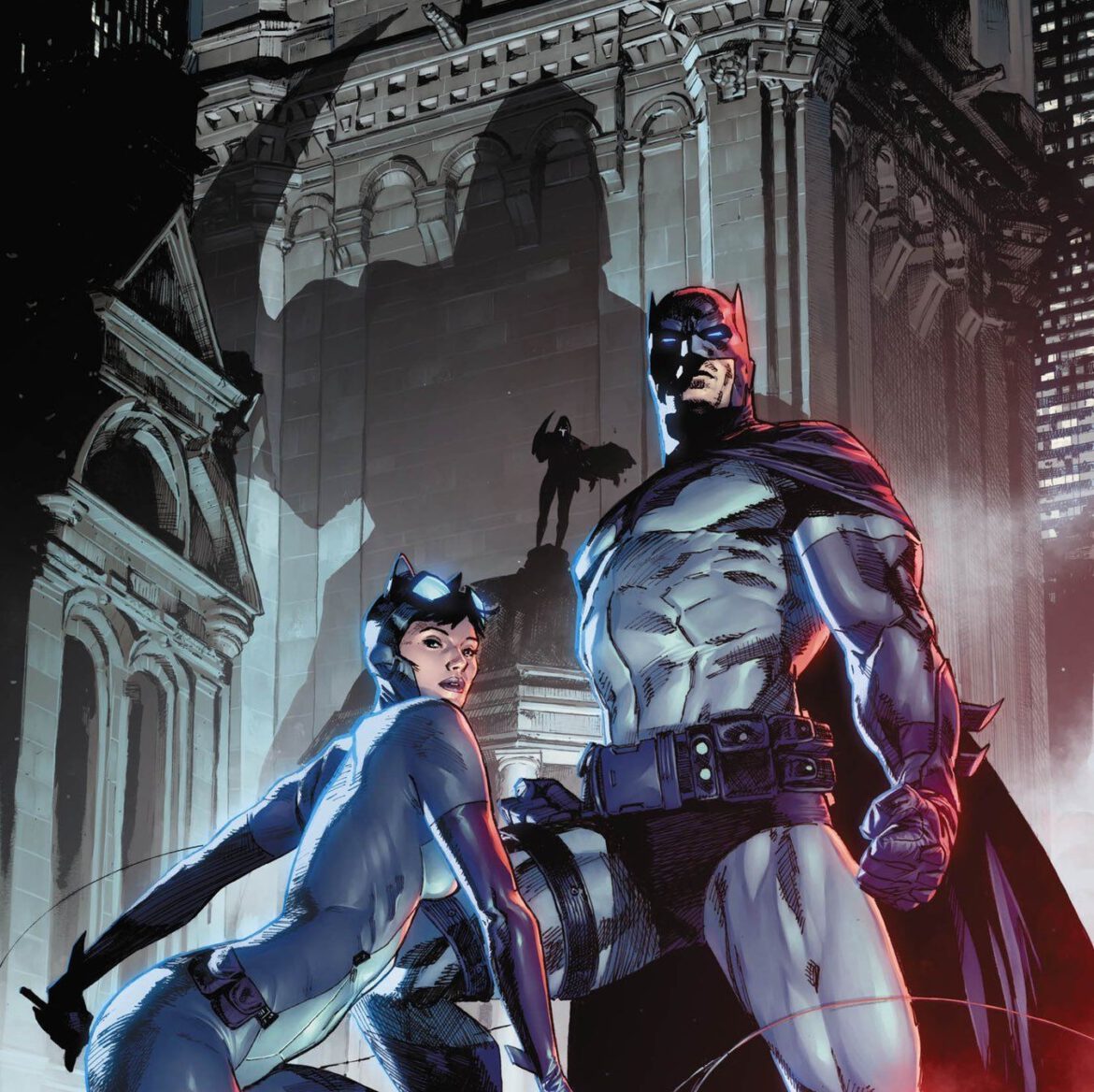 Overview: Batman and Catwoman investigate the murder of Joker’s henchmen, who are being killed off one-by-one by the Phantasm.

Synopsis (spoilers ahead): Three quick panels open Batman/Catwoman #2. In the first panel, an old, retired Joker asks an elderly Selina Kyle how she’s going to kill him. In the second panel, Batman and Catwoman are at the Batcomputer, where Batman is analyzing the murder of Jimmy the Lion, whom he correctly hypothesizes was killed by the Joker. In the final panel, Selina tells Joker that she’s going to slit his throat with her fingernail.

In the present, Batman and Catwoman investigate the body of Scott Huff, a henchman of the Joker. Scott has been slain by the Phantasm. Seeing his corpse reminds Selina of her most recent encounter with Joker, which Batman doesn’t know about.

Scott Huff was closing up a toy shop where the Joker was lying low. After Scott covers for Joker, Catwoman beats her way past him and into the store. Inside, Mr. J is lounging on top of a mountain of presents and sucking on a candy cane. “Up on the House Top” plays in the background.

Selina tells Joker that Batman is investigating the murder of Jimmy the Lion, a deceased mob enforcer, thanks to Mr. J not cleaning up after himself. She throws a lion necklace at Joker, which she stole in the last issue, stating that she can’t have it on her now that Batman is looking into this.

In the future, an elderly Joker asks Selina if she wants a drink of water. As he’s getting a couple of drinks together, they discuss that time the two of them were together in the church on the night before Batman and Catwoman’s non-wedding (Batman #49). Joker reminisces about that particular evening, reminding himself about how good it was. As he talks about how every day is the same in his old age, he reaches for a gun in the freezer.

At Porky’s Bar, a man toasts a glass of whiskey to the “Angel of Death,” meaning the Phantasm. Shortly after, Batman tells Commissioner Gordon that this victim was Warren Poland, another henchman of the Joker. The two note how the Phantasm is hunting again.

At the bar, Batman is cracking a safe for Gordon. Catwoman asks what he expects to find in there. Batman tells her that he’s looking for a necklace Jimmy the Lion recently purchased, as he found bits of a necklace chain on Jimmy’s pillow.

In the future, the Joker fires several shots through a crack in the door, aimed where Selina Kyle was sitting. She sneaks up behind him with a picture frame in hand.

Down in the subway system of Gotham City, a man runs for his life, hopping on an empty train. Several cars down, the Phantasm looms. She calls out the man’s name, telling him that his angel of death awaits.

Back at Wayne Manor, Bruce and Selina discuss the missing necklace. It wasn’t in the safe, and Bruce shoots down Selina’s theory that Joker sold it for money, noting that there were diamonds worth ten times more than that necklace in that safe.

In the future, Selina knocks the gun out of Joker’s hand with a picture frame. Joker pulls a knife, but Selina kicks Mr. J before he can stab her. She tells Joker that she can’t get Andrea Beaumont, the Phantasm, out of her head.

At Wayne Manor, the Bat-signal shines in the night sky, but the angle of the signal is wrong, meaning that it’s not Gordon summoning Batman. Batman and Catwoman arrive on the rooftop of the GCPD building to find the Joker, who begs for protection from the Phantasm.

In a flashback to the previous night, Batman asks Catwoman about the necklace, noting that it was a lion. He asks her if she was there with Joker, telling her he can’t deal with the lies anymore. Catwoman lies once more, telling him that she wasn’t there.

In the future, Selina removes the glove from her hand and slices Joker’s throat with her fingernail.

Analysis: Batman/Catwoman #2 continues the last issue’s format of leaping between three different time periods. We have Catwoman’s secret actions prior to Batman investigating the deaths of Joker’s henchmen, the main timeline wherein the Phantasm is killing off Joker’s crew and Batman is analyzing the crime scenes with Catwoman, and far into the future after Bruce has passed, where Selina Kyle gets her long-desired revenge on Joker.

This second issue isn’t as heavy with thematic parallels between the jumps in time. It’s much more focused on the relationship between Joker and Catwoman this time, further positioning Catwoman as a woman struggling to keep one foot in each world. In the criminal underbelly, she’s furious at Joker for bringing attention to himself, and by association, herself. She throws Jimmy the Lion’s necklace at him, expressing her frustration and rage that now she has to lie to Batman once more. In Batman’s world, she supports her lover, careful not to implicate herself in his investigations. She’s the one who ultimately cracked the safe for Batman, despite it pushing Batman to further question Catwoman’s involvement in all of this.

In the future, Selina lies a final time to Bruce, after he’s passed, in finally following out her desire to murder the Joker once and for all. It’s in these scenes, where Joker and Selina reminisce about the good old days, that this issue spends much of its time. Selina can’t stop thinking about Andrea Beaumont, and despite promising Bruce that she wouldn’t, she’s compelled to kill a long-retired frenemy from her criminal past.

We, the readers, don’t know what happens to Andrea Beaumont yet, other than the murder of her son at the hands of (assumedly) the Joker, but it must be something wicked for Selina to obsess over it so much.

Compared to the last issue, the story, plot, and dialogue feel weak. While Catwoman’s dual role as confidante and associate to Joker and lover to Batman remain interesting, there isn’t much emotional tug to this narrative to invest readers. Writer Tom King has written this as a mystery, revealing juxtaposed elements of the story in pieces, as is often his style. In some stories, there’s just enough of a tether to compel readers forward. In this particular issue, too much has been withheld, and we’re left to rely on referential material and shock value to keep us going. This issue really leans into Catwoman’s many roles, but we’re left guessing at why she does what she does, which makes it difficult to truly connect to what’s going on.

The art by Clay Mann does an overwhelming amount of heavy lifting in Batman/Catwoman #2. Mann’s art is as stellar as his reputation. He delivers some truly grandiose panels, particularly a full-page panel in which Joker lounges atop a mountain of presents in a Christmas-themed outfit. Paired with Tomeu Morey’s coloring, this particular scene is rich, detailed, and breathtaking. It plays wonderfully in stark contrast to the grim, violent panels of Phantasm’s murder victims.

Another unique element Mann brings to this issue is his focus on objects or pets around the central three characters. In the future scenes, Mann devotes a few panels to the water glasses Joker fills, juxtaposing these with frequent close-ups of Selina’s cat, instead of showing more of the two of them talking with one another. In fact, we rarely see Selina at all in these scenes; we don’t see older Selina much until Joker and herself try to kill each other.

Guns are frequently the focus of Joker panels in all three timelines, and each character is given a close-up panel of their lips. In Bruce’s case, it’s when he’s eating a meal with Selina. Joker’s lips closeup involves him sucking a candy cane, and Selina’s closeup appears when she lies to Batman about whether or not she was there when Joker killed Jimmy the Lion. Each of these closeups adds a layer of intimacy between the three characters, all of which preclude some scene of violence almost immediately after. It’s unsettling and keeps us on our toes; that’s most likely the point.

Batman/Catwoman #2 delivers some of the most incredible, intimate, and unsettling art in any Batman book currently on the shelves, despite it coming up short with thin plotting.