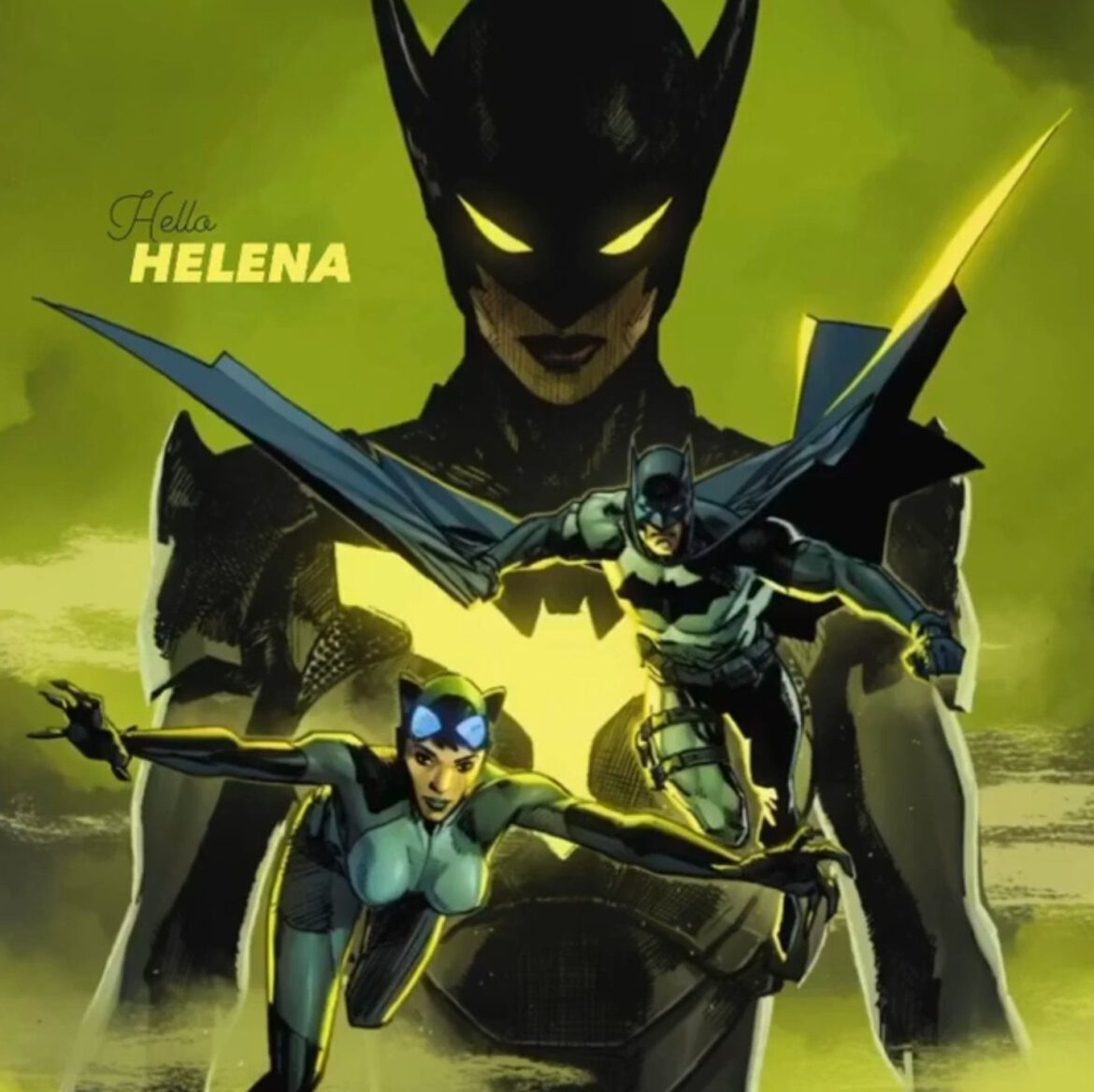 Overview: In Batman/Catwoman #4, Catwoman tells Batman about Joker’s bomb under the ice rink while, in the future, Batwoman visits Batman’s old rogues’ gallery to get information about the relationship between Catwoman and Joker.

Synopsis (spoilers ahead): Batman/Catwoman #4 has Gothamites skate around an ice ring while “Hark! The Herald Angels Sing” plays in the background. Unbeknownst to the citizens, a bomb planted by the Joker ticks away beneath the ice.

Elsewhere, the Phantasm walks through a model of Gotham City from the old Gotham World’s Fair. She enters a room just beyond the model city where a bunch of stacked TV sets display pictures of both the Joker and Andrea Beaumont’s deceased son.

In the future, Penguin and his henchmen are assaulted by Batwoman, Helena Wayne. She takes down Oswald Cobblepot’s henchmen and tells him that he’s going to dish on the relationship between Catwoman and Joker. Helena refers to Catwoman as her “mother,” implying that Penguin knows who this new Batwoman is.

Back in the past, Bruce Wayne and Selena Kyle are preparing to attend a party. Bruce is tying his tie, telling Selina that he’s looking forward to attending the party with her when she reveals that Joker has planted a bomb beneath the Gotham ice rink. Bruce ditches his suit and heads to change into Batman. He tells Selina to get Alfred to cover for them.

In the present, Selina awakes and hears a child asking his mother about the Gotham World’s Fair. The mother describes what it was like — the vision of the future depicted at the fair. Selina follows the voices down a staircase into the Phantasm’s lair, where Andrea is watching a video of her son. Andrea tells Selina that she’s holding Catwoman hostage in exchange for Joker’s life.

Back in the future, Batwoman asks many of Batman’s old rogues, including the Ventriloquist, Victor Zsasz, Clayface, Tweedledee and Tweedledum, and Nora Fries, about the close relationship between Catwoman and Joker. She learns that they had one of the closest relationships among the rogues.

Selina pays Penguin a visit in the future. She has a cat with her. Penguin, who is busy eating a meal, dismisses Selina’s request for information on what he said to Batwoman. Tired of playing games, Selina tells Oswald she that owns this city. Then, she releases her pet cat. The cat pounces on one of Oswald’s prized penguins and kills it.

After Batman defuses the bomb at the Gotham ice rink, he finds Catwoman out in the city. He demands to know where the Joker is. Catwoman pushes back, telling him to threaten, beat, and scare her to death as he does to all of his other lovers. Then she disappears into the night, leaving Batman perched atop a church alone.

Analysis: Batman/Catwoman #4 is sneaky in how subtle it is. At first read, it comes across as a filler issue after last month’s plot-heavy Batman/Catwoman #3. But it’s not quite a filler issue. For starters, Catwoman has come to a decision about whether or not to tell Batman about the bomb that Joker’s planted beneath the Gotham ice rink. Though it’s not explicitly stated, Selina has confirmed Batman’s suspicions of her close relationship with the Joker in telling Bruce about the bomb. For Selina, it was a moral dilemma, and she came to the decision that the lives of innocent Gothamites are more valuable than the good relationship, albeit one strained from being riddled with secrets, that she has with Bruce. This is her choosing Batman’s way in that fine line she walks between criminal and vigilante, and this is writer Tom King’s way, relying on subtext to fill in the gaps for those emotional punches in this issue. Selina can’t live with the guilt of all of those lives lost because of her, but we, as readers, have to infer that.

When Selina gives up the location of Joker’s bomb, it comes during a relatively happy moment for Bruce. He’s excited to attend this party with her, to be normal for once. Immediately after she tells him about the bomb, his scorn, the betrayal which artist Clay Mann draws in his eyes before he walks away, tells us all that we need to know about how deep those suspicions Bruce has carried go. For the past few issues, Batman has raised questions and received answers meant to pacify him. In one panel, Mann is able to show us how those questions have been festering over the course of this miniseries, and it’s painful.

Speaking of pain, roughly half of this issue focuses on Helena Wayne’s hunt for answers about her mother and Joker’s relationship. She even refers to Selina as her “mother” in front of Penguin, which speaks to both what Penguin must know about Batwoman in this future, as well as how little Batwoman cares about masking her identity in a room full of henchmen. On one hand, it seems silly that Helena would be so reckless, but on the other hand, perhaps it’s meant to imply a much bigger undertone of anger? In the last issue, we learned that Helena was investigating the death of Joker, and she implied that she thinks her mother might be involved. This recklessness could be a continuation of how poorly that idea sits with Helena.

Questioning Penguin ultimately leads to Selina covering up her tracks later by killing one of Oswald’s penguins. While gorgeously rendered by Clay Mann and colorist Tomeu Morey, the animal violence here is both excessive and superfluous. I get that it’s supposed to be intimidating, but the full-page depiction of a feral cat perched above the torn-open throat of a penguin in Batman/Catwoman #4 doesn’t add any depth to the implication that Selina is going to take down Oswald. If anything, it feels needlessly cruel.

(I do want to take a moment to point out that Mann’s nod to Danny DeVito’s portrayal of Penguin did not go unnoticed in this issue.)

As far as the plot goes, the only thing the main event that happens is that, after the apparent dissolution of Batman and Catwoman’s relationship (yet again by King), Catwoman finds herself hostage to the Phantasm. That’s about it. Batman/Catwoman #4 moves the needle on the story, barely. Despite this, King and Mann do a great job at layering subtext that plays off well for readers who have been paying attention to these past four issues.

Batman/Catwoman #4 is a beautiful issue that builds upon the emotions of the last three entries, despite not really carrying the plot forward. Its momentum lies in how it provokes the emotions of readers who are fully invested in the Bat/Cat relationship dynamic.