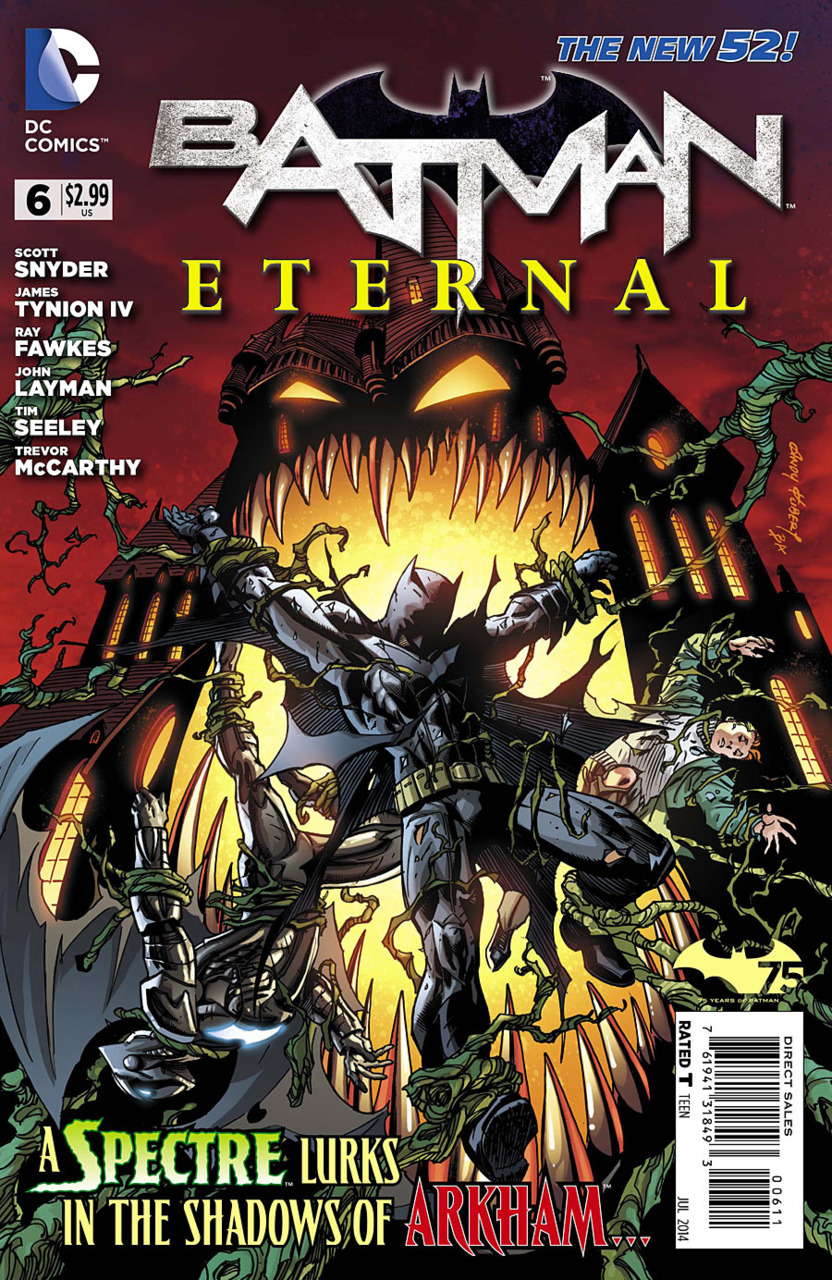 In Batman: Eternal #6, Batwing is challenged by his believes and is assigned by Batman to take a journey into the Arkham with the Spectre to investigate some ghostly happenings.

This issue is the worst in the series so far. It has almost nothing to do with what the last issues having been dealing with except for the fact it follows up on a scene from the first issue that I had completely forgot about. In the grand scheme of things, it holds no importance to the overall story and it just seems like filler. This is also one of the problems I had with the last issue. It introduces new characters into the series specifically with this issue the Spectre, Batwing, and Joker's Daughter and then at the end of the issue leaves you on a cliffhanger that won’t be resolved for a couple more issue.

At this point in the story, they have started so many subplots that not only is it hard to follow and keep track of things, but its making me lose all interest. I really wonder why they would feel the need to add a paranormal aspect to the story. So far it’s mostly been about Falcone’s return has started a coming gang war, the G.C.P.D being corrupted from the inside and sending Gordon to prison, and Red Robin's finding of a technological virus, plus Harper Row and Stephanie Brown’s side story. This issue had nothing to do with any of those plot points.

Why would Batman call Batwing to investigate the supernatural stuff which he doesn’t even believe in? Wouldn’t Batwoman be more applicable for the job? I mean she has dealt with many supernatural foes in Gotham. So why call Batwing who is an inexperienced person? It just sounds really dumb to me.

Another thing that really bothered me was that in Arkham the villain who has taken control is Joker's Daughter. The reason why I have a problem with this is because she is such a stupid character and she has no reason to be in charge of anything. She has no powers of any sort, she just wears a gross mask. She is not smart, nor does she have any fight skills that would put her is such a position.  Not to mention how did she even get into Arkham? Before she was just living in a sewer. I would think there would be many people wanting to beat the crap out of her if she tried to take control of Arkham like Killer Croc, Mad Hatter, or even Poison Ivy. The only thing that would make me like this character would be if the Joker came back and decapitated her.

What I didn’t hate as much

The art was really good for this issue. It’s not as detailed as the other issues nor is as stylized as the Nguyen issue, but its good none-the-less. I also like the panel layout. I thought it gave a good flow to the story.

Batman: Eternal #6 is the worst issue so far. I didn’t enjoy and thought the story was just plain dumb. When this part of the story picks up again in a later issue, I will give it a chance, but my expectations are pretty low.