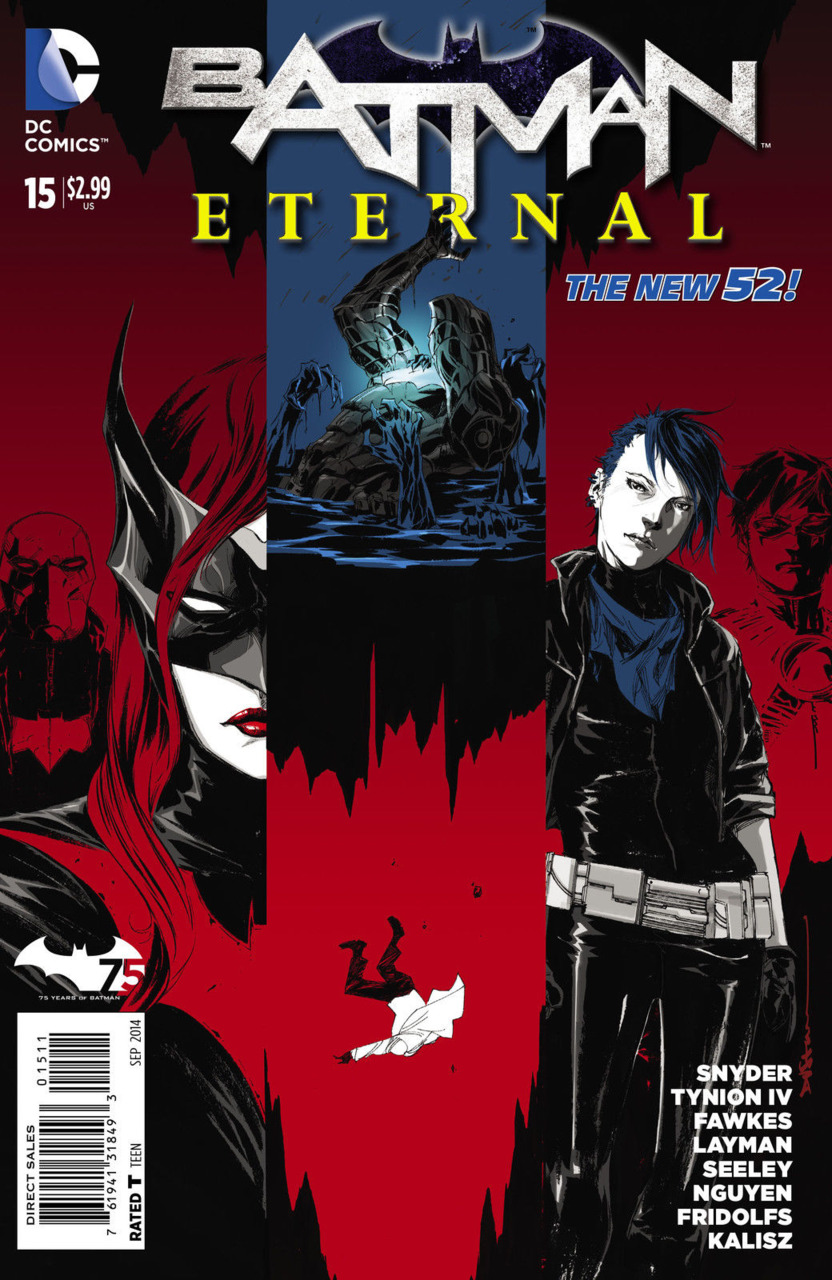 The last few weeks of Eternal have been the best of the series so far. I will admit, I was nervous about this weeks issue since Tynion wasn't going to be writing it. Instead, we get Ray Fawkes, who will be scripting the next three issues. He seems to have taken a que from Tynion, and playing several different storylines in one book, and it's definitely paying off. Another successful issue of Eternal is in the books.

Dustin Nguyen does the art & cover for this issue, as well as the next two issues. His covers continue to be awesome, and although his interiors are a different style, they look great as well. This dark, creepy, mystical story fits well with Nguyen's style.

We continue our story left from issue six, with Batwing & Jim Corrigan as they make their way deeper into Arkham Asylum. The pass by Magpie, and Batwing gives her a knockout dart. They come to an area where Corrigan senses magic, and begins to feel uneasy.

Red Robin and Harper Row are continuing on their way to Tokyo. Once there, Tim tells Harper to stay there, but she refuses, and has some quasi-Grifter-style mask.

Batman meets up with Jason Bard, as he is wrangling up some more of Falcone's thugs. And Batman shakes Bard's hand. Something he refused last week. (The budding of a friendship)

Batgirl & Red Hood are in the Brazil, so they can talk to a Dr. Mangaravite, when they see Batwoman has beaten them there, and is beating him up. But she lets Batgirl go first to get her questions answered.

Batwing & Corrigan come across Riddler's cell, and there is a secret code inscribed on the wall (solve it if you can). They move on to Scarecrow's cell, and see a pool of blood flowing upwards into the ceiling. They go downstairs, and come across the Ten-Eyed Man, but just keep on going. They come across a flow of magic, and Corrigan tells Batwing to leave. Luke refuses, and sticks with him, when they see Scarecrow floating near the ceiling with his blood being drained from his body. A bunch of zombie looking people come out from the wall, and attack our heroes. Luke tells Corrigan to turn into the Spectre, but he tells Luke that he can't. The monsters pull Luke through the floor, down to Joker's Daughter. Corrigan is taken to another room to a Mister Bygone (who?).

Really cool issue, we have several callbacks to past villains, a secret code someone has yet to decipher, and even some new villains entirely. I like that we don't get so much of Batman, since he is in so many books already, and that we focus more on his supporting cast. I'm glad they have switched up the format on these books. We get to focus on one story, but still see just a page or two of what's going on elsewhere. By doing this, they've out done what they stole from Futures End. And, we will get more story progression in the following weeks.