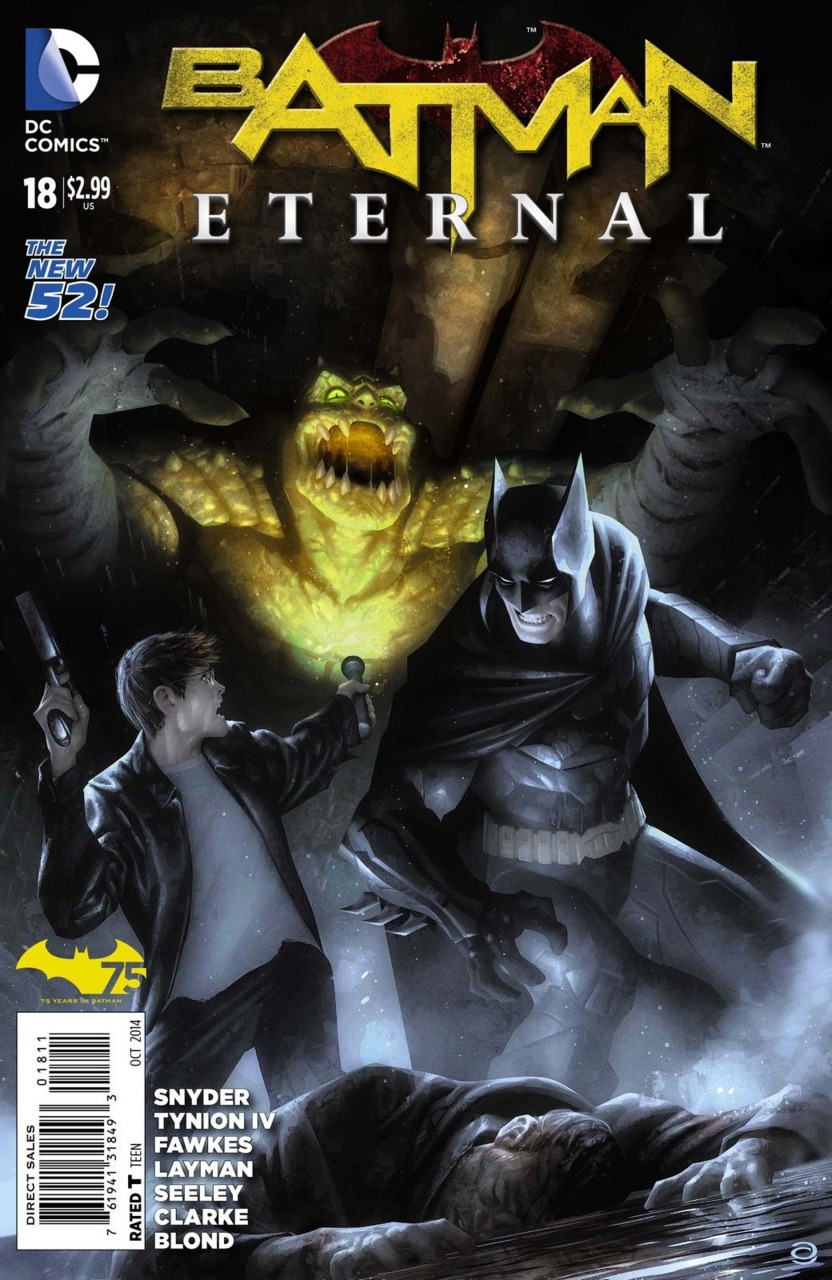 Here, we get our next arc of Eternal written by Grayson’s Tim Seeley with art by Andy Clarke. It’s kinda tough, starting a completely different story at the climax of the last one. And although that seems to be the thing with these weekly books, I don’t know that I like that aspect of them. I wish we could finish one story, and move on to the next.

Alex Garner’s cover is freaking gorgeous. I’d like to see this guy do a graphic novel, or something. His art has a scenes of realism, yet still fantastical. It has soft coloring, that gives a life to it.

Seeley’s script seems to be simplified from what Tynion and Fawkes have been doing the last few weeks. He has two main stories and a single smaller side story. This, along with the weak dialog from the characters is what makes this issue the weakest issue we’ve had in the past month and a half.

The best part of this comic is Andy Clarke. The guy has a gritty, creepy style that haunts you as you read. He shows off that he has a great sense of perspective in his art, placing you in the room with them and his attention to detail is among the best. Giving is lots of line-work makes for a great looking Croc.

Batman is following Jason Bard, keeping an eye on him. He and Alfred are discussing how they feel about him. If they think he has an agenda of his own and if he is trying to become the new police commissioner. Alfred’s daughter, Julia, has gone out partying, so she apparently didn’t see the Batcave. A man is running down the street, carrying someone who seems to be badly hurt. He runs past Bard and goes into the sewers, saying that someone down there should help. Batman and Bard follow down into the sewers to find someone dead, who’s face has been eaten. Suddenly, they are attacked by Croc, who Bard believes killed this man. However, if you read the Killer Croc one-shot during villains month, you know he has an underground army of people who he takes care of. Batman tells Croc he believes him and says he knows what did kill this man as he points to a black handprint on the wall. As Bard, Croc and Batman make their way down the sewers, we see a creepy alien looking thing. Assuming that’s the creature they are looking for.

Gordon seems to have a few allies in the guards of Blackgate, but he’s also among Penguin and Falcone along with their men. And a war is brewing in the prison.

Back in Brazil, Batgirl, Batwoman and Red Hood are infiltrating a warehouse where men are forcing children to make Batman toys. Red Hood calls out Batgirl on her anger, but she doesn’t believe it coming from Jason… But that just shows you how bad it is. They split up, but Batgirl comes across a man who has the ability to manipulate her to do what he wants and he sends her to attack Red Hood and Batwoman.

One of the weaker issues in some time, but hopefully will be back on track next week.